Tatijana Busic and Brendan Schulz (pictured here with their son, Milo, and Tatijana’s daughter, Isadora) met on a matchmaking site—but not a romantic one. Modamily is one of a growing number of websites that connects aspiring parents in a platonic partnership. Image by: Katia Taylor

Meet the new wave of nuclear families: couples raising kids in relationships that aren't defined by romantic love. Here's how they come together and what makes them work.

Diapers before date nights, bottles of milk before bottles of wine, timeouts before time alone—in many ways, contemporary parenting and its often-overwhelming demands can seem incompatible with the maintenance of romantic love, especially when the necessity of changing a seemingly endless number of nappies eclipses the commitment to keeping-the-magic-alive date nights. But there's a new parenting trend on the horizon that takes the romance out of raising kids altogether: elective co-parenting.

A platonic partnership is at the heart of these newfangled families, in which new and old friends team up to provide what's best for their kids. The love, commitment and wanting the best for your babies are all there; it's just the formation that's changed. Because, let's face it, that idealized script involving romance, a wedding and the birth of children followed by a lifetime of happiness isn't infallible, and our brave new world is adapting.

Studies on this subject are in their own infancy, but according to one from England's Centre for Family Research at the University of Cambridge, there's been a rise in co-parenting over the past several years—particularly among single heterosexual women, whose average age at the time they sought out these arrangements was 35. Tabitha Freeman, coauthor of the Cambridge study and a senior research associate at the centre, acknowledges there has been very little scrutiny on the topic. But she believes that, as with many parenting situations, a positive relationship—though not necessarily a romantic one—between co-parents is probably the linchpin to raising well-adjusted children. "Although there's currently no evidence concerning the psychological well-being of children raised by elective co-parents, the nature of the relationship that develops between the parents is likely to be key," says Freeman. A warm and supportive relationship can come in many forms—and is what elective co-parents are trying to achieve.

They're men and women, straight and gay, cis- and transgender who simply never met the right romantic partner but want to raise a child. And while some co-parenting unions are struck among old friends or new acquaintances, others have been facilitated between like-minded strangers by a growing number of parenting and matchmaking services, including websites such as coparents.com, modamily.com and familybydesign.com.

Modamily founder Ivan Fatovic says the site has acquired 15,000 members—two-thirds of whom are women—since launching in 2012. "It works a lot like an online dating site, where you message and meet people on your own, but we also have a personal matchmaking service for those who want a little more guidance," says Fatovic. "The sought-after co-parenting criteria varies from person to person—users specify everything from height to hair colour—but more than anything else, they're looking for someone who complements their value system."

From meeting online, at work or by chance, these three sets of co-parents are helping forge a new definition of family life that's less conventional, but no less loving.

Who: Natasha Bakht (left), 45, and Lynda Collins, 43, colleagues and good friends for 11 years
Best Part Of Co-parenting: "Having someone to share the happy memories with." —Natasha 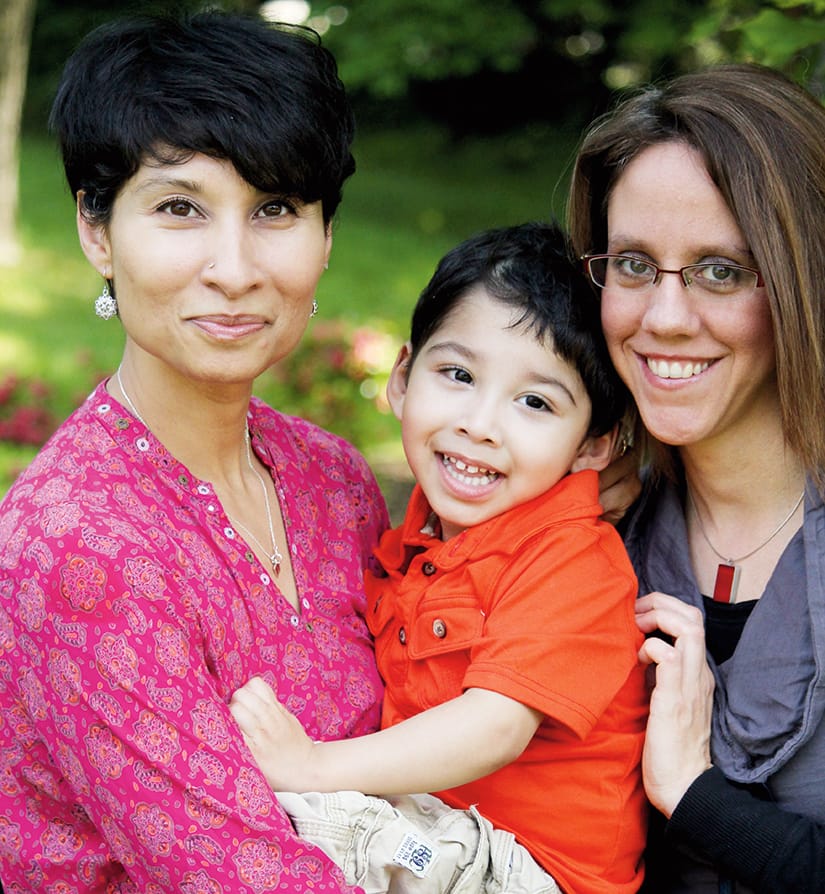 Natasha Bakht and Lynda Collins, pictured with their son, Elaan, say that the hardest part of co-parenting is simply parenting, not the co.  Image by: Isra Ameen

Lynda Collins and Natasha Bakht, colleagues in the faculty of law at the University of Ottawa, have been friends for 11 years. Still single but keen to start a family, Natasha decided in her mid-30s to find a sperm donor and become a single mother. Her good friend Lynda was enthusiastic and supportive: "I immediately asked if she needed a birthing coach." The first person to hold her friend's son, Elaan, Lynda was overcome by maternal feelings. "I loved him as my own right from the start," she says, adding that she visited daily.

The good friend's supportive role grew when, at six months old, Elaan began having seizures and wasn't holding his head up. At two years old, he was diagnosed with cerebral palsy, including spastic quadriplegia and cortical visual impairment, which means he requires help with mobility and all activities of daily living.

Lynda leaped into action, accompanying Natasha and the baby to doctor's appointments and discussing treatment options.

As Elaan's needs grew—he uses a wheeled walker and is tube-fed—so did Lynda's support, and she moved into the condo unit above Natasha's to help with daily care. Natasha typically handles the morning before-school routine, while Lynda comes over in the evenings to organize Elaan's medications and get him ready for bed. Many nights, Lynda plays guitar while she and Natasha sing for Elaan. He loves it and indicates with a smile which songs he wants. On weekends, the three do most activities—eating meals, running errands or enjoying the city—together.

"We were co-parenting without calling it that," says Natasha. "So, when Lynda asked me if she could adopt Elaan, it didn't take me long to decide." The problem was Lynda didn't meet the technical definition of "partner" eligible for step-parent adoption under Canadian law—a term typically reserved for a romantic partner who wants to adopt the other person's child.

It took 10 months and the help of a lawyer, but in November 2015, Natasha and Lynda won a landmark ruling to become legal co-parents—a first for platonic friends in Canada. Elaan's birth certificate, now including both parents' names, arrived in January 2016, and "Auntie Lyndy" has become "Lyndy Mummy."

Who: Brendan Schulz, 45, and Tatijana Busic, 42, strangers who met on a co-parenting matchmaking site
Best part of co-parenting: "Modelling to our son and my daughter that families come in all shapes and sizes." —Tatijana 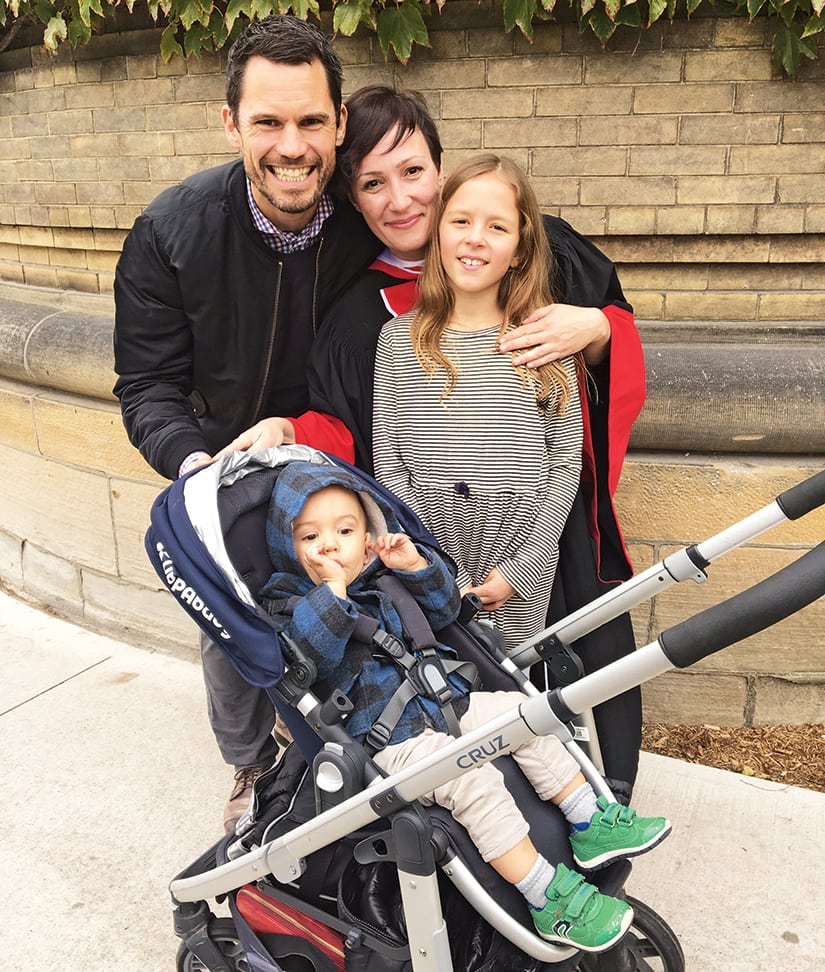 Though the term "chemistry" often describes a romantic spark, Tatijana Busic, an organizational consultant, was looking for a different kind of chemistry altogether (no, not the science one). Single but ready to give her daughter, Isadora (from a previous marriage), a sibling and raise another child, she sought a match made in heaven with a platonic parental partner she had yet to meet. A friend read a newspaper article about the co-parenting matchmaking site Modamily and suggested it to Tatijana. She found it very similar to online dating—crafting a profile, then browsing the extensive options. She had interacted with only two men when she and Brendan Schulz connected. They immediately began peppering each other with practical questions about parenting, religion, education and values—and found they were on the same page.

Over a yearlong period, Tatijana and Brendan—an unattached gay man who also wanted a parental partner—"courted" each other, first meeting for coffee, then dinners, then arranging visits with family, including Tatijana's daughter. "One night at dinner, after these months of discussions, Brendan just said, ‘Do you want to do this?' " says Tatijana.

Milo, Brendan and Tatijana's biological child, was carried by Tatijana and born in June 2016. Eager to be included in as many newborn moments as possible, Brendan moved in during the first two postnatal months. "For me, it was really important that we be equal partners in raising our child," says the executive director of student success at York University in Toronto. "I didn't want to be a 'special uncle'—I wanted to be his dad." The pair had already agreed upon a 14-day schedule that splits custody 50-50 (they live just five kilometres from each other) and they developed an agreement of accountability that outlines everything from finances to medical care to dating to recreational activities.

The tight bond between Mom and Dad has been a very happy bonus. "When I pictured a co-parenting relationship in my head, it was more practical," says Brendan. "But the sense of family is stronger than I ever imagined. We share all of life's joys, successes and challenges." For her part, Tatijana has been happy to sever parenting from the expectations of romantic love. "Brendan is my really good friend and my co-parent. He's family and there's lots of love between us, but he doesn't have to be everything else," she says. "We're a family that happens to live in two houses. And when we tell Milo's story, we tell the truth: He was born from love."

Who: Joel McCarthy, 27, and Rachel Kirkpatrick, 26, friends who had a fling
Best part of co-parenting: "It's so practical in terms of help and resources. I feel like I still get some autonomy as a person." —Rachel

In the spring of 2016, Rachel Kirkpatrick and Joel McCarthy won a $50,000 grant from Telus's Storyhive project to develop a web series, Inconceivable, with an outlandish premise: Two friends—an out lesbian and a straight man—have a six-month open relationship that results in a pregnancy and decide to keep the baby. The twist? The story is true, based on Rachel and Joel's real-life road to parenthood.

"Once, when Joel and I had sex, the condom broke," says Rachel, a henna and visual artist in White Rock, B.C. Faced with a decision, they made a list of pros and cons—for example, starting a family while still young and energetic versus financial concerns—before deciding to have the baby and raise him together. The more they talked about it, the more excited they became about being parents, even though they were jumping into uncharted territory. "We didn't have any models for how to do this," says Joel, a filmmaker and teacher.

Despite their unconventional circumstances, the pair see themselves as fairly typical millennials: Both are lukewarm about the idea of lifelong monogamy, both value creativity and their finances have been shaky at times. When their son, Bowie (his name commemorates the fact that Rachel found out she was pregnant the day after David Bowie died), was born in September 2016, the family began living in a Burnaby, B.C., home with two other friends. (Rachel and Joel have separate bedrooms.)  There continue to be changes in their situation, such as new jobs, and Rachel is dividing her time between her father's home in White Rock and the home she shares with Joel. "We're still learning how to communicate clearly. That's been a big learning curve," says Rachel, citing scheduling difficulties and learning to ask each other for help. "We face a lot of the same issues that come up in conventional parenting, including conflicts and annoyances."

Joel agrees. "We're still figuring out what works and what doesn't," he says. That may, he acknowledges, be more complicated in the future if either he or Rachel finds a long-term partner. "My ideal situation would be a duplex, so Bowie could just come and go," says Rachel. "But whether or not that happens, we'll always be partners in parenting."

House blend: How to make your blended family work

Blended families are more common than ever, representing close to 13 percent of Canadian households. But you can say buh-bye to those Brady Bunch clichés—successfully combining two families into one unit can be complicated. Here's how three different couples made it work.