Whether it's a prized cookbook, a baking tip you cherish from your oma or a set of silverware passed down through the generations, food and all the traditions that surround it are likely a big part of your family life. These Canadian women understand the importance of breaking bread, and they've found a way to share their own family recipes, cultures and passions for everything from Riesling wine to tadka masala spice mix to Imperial cookies with the masses. Here are their stories. 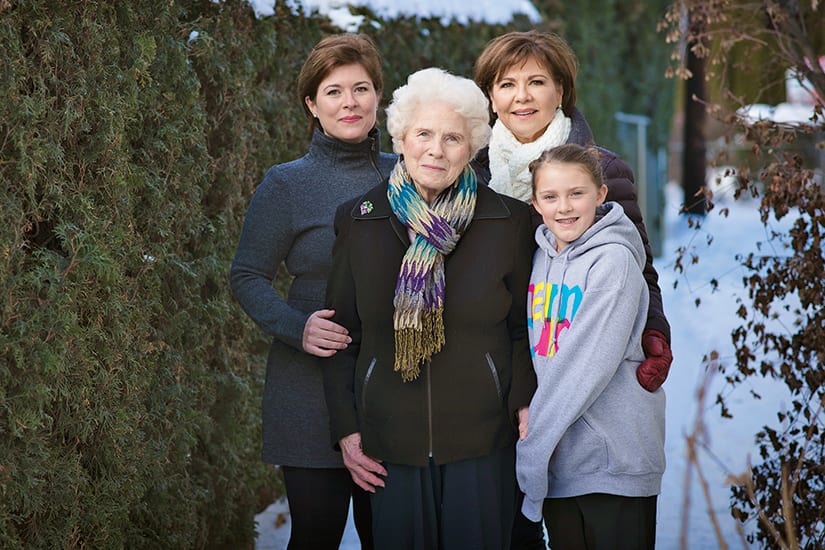 THEIR STORY: By the time Ann, Susan and Jill (and their partners) launched their wine label in 2008, their Okanagan farm had already been in the family for almost 160 years. But although they had long grown grapevines on the property, the Sperlings had always sold their crops to wineries. "Having wine under our own label was a family dream," says Ann, a longtime winemaker in Canada and Argentina. She was able to help realize that collective dream when her parents were looking for one of their kids to take over the family farm so they could retire. "It was a chance to take what I knew about the vineyard from walking over it in my bare feet throughout my childhood," says Ann. Everyone was on board, taking on roles based on their skills: Jill volunteered to run day-to-day operations; Ann focused on production; and Susan helmed sales. And as the winery grows, everyone continues to help with the harvest—even Jill's small kids. 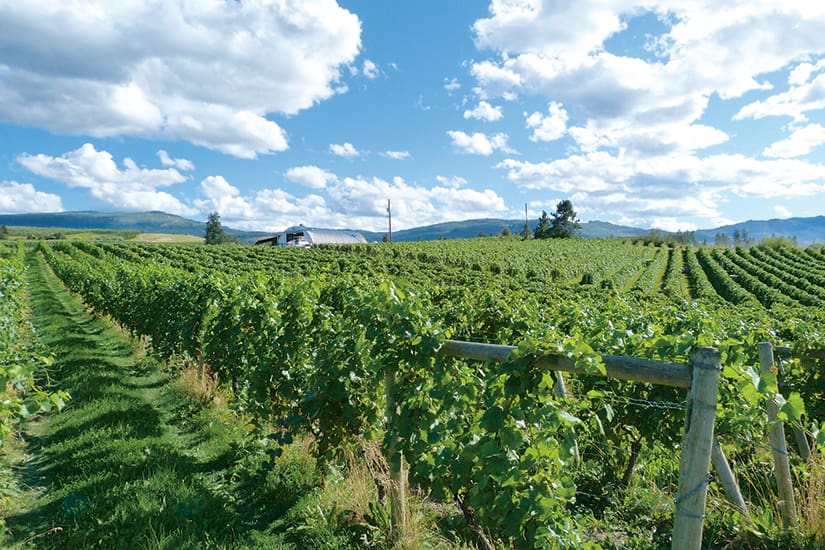 ON A FAVOURITE WINE: "Our flagship wine, a Reisling, is made from vines my dad planted back in 1978—among the earliest planted in Canada," says Ann. "Our dad was a visionary."

ON OVERCOMING OBSTACLES: "In 2013, we all decided to have a camping weekend," says Susan. "While we were away, a hailstorm absolutely pummelled our vineyard, damaging much of our wine grape crop and eliminating the table grapes we sell to supermarkets. We said, 'OK, what can we do with what we've got?' And we created a few wines that were totally new to us, including our beautiful Pinot Noir rosé."

ON THE BEST PART OF THE JOB: "It's about giving roots to the next generations, the same roots I was given," says Susan. "I've always been so proud of my home. I lived on the land, and my family's footprint is still there." 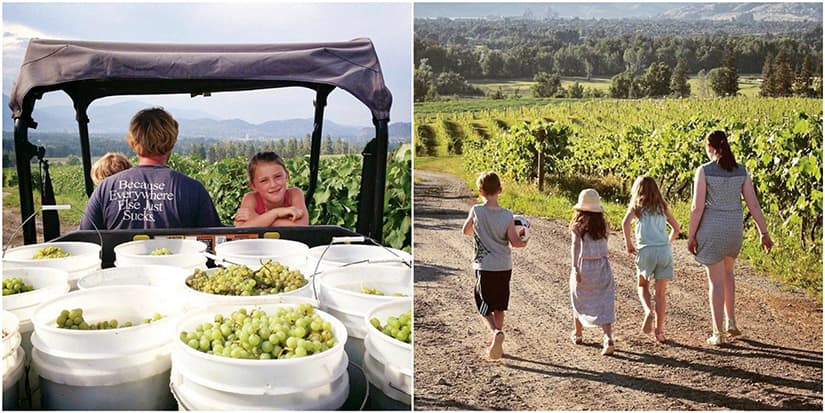 WHO: Mom Jaswant and daughters Nimi, Roupi and Simi Kular
WHERE: Toronto 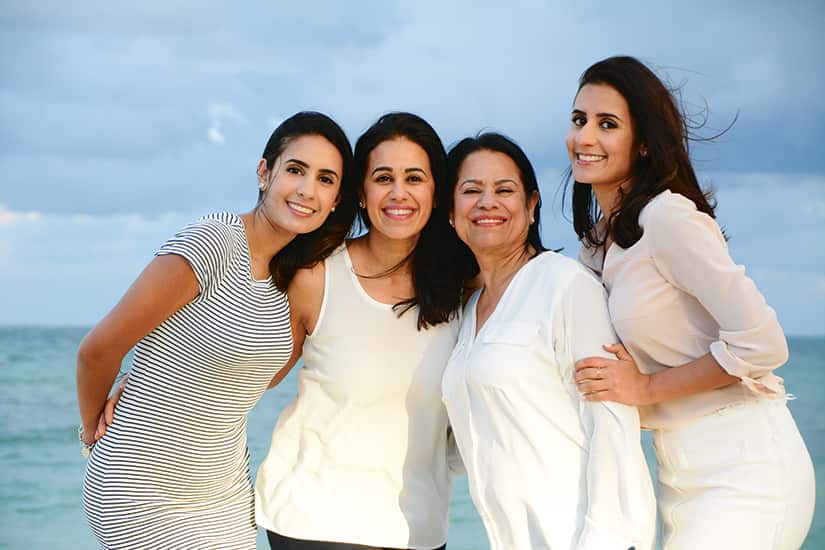 Nimi, Simi, Jaswant and Roupi Kular on a recent vacation to the Mayan Riviera.

THEIR STORY: It all started with curry powder. "As my children grew up and moved away, I felt they needed help making homemade Indian food," says Jaswant. She knew that Indian dishes were notoriously complex and time-intensive, so she blended a curry powder to help her daughter Simi cook on her own. It went so well that she developed more foolproof dry spice blends and standardized her recipes. "I wanted my kids to keep on cooking and feed the next generation," she says. "I didn't want to lose our Indian culture." In 2010, Nimi and Roupi suggested that Jaswant sell the blends and the three of them started Jaswant's Kitchen. In Canada, the blends are sold at food shows, in independent retailers and online through sites such as Amazon and Etsy. 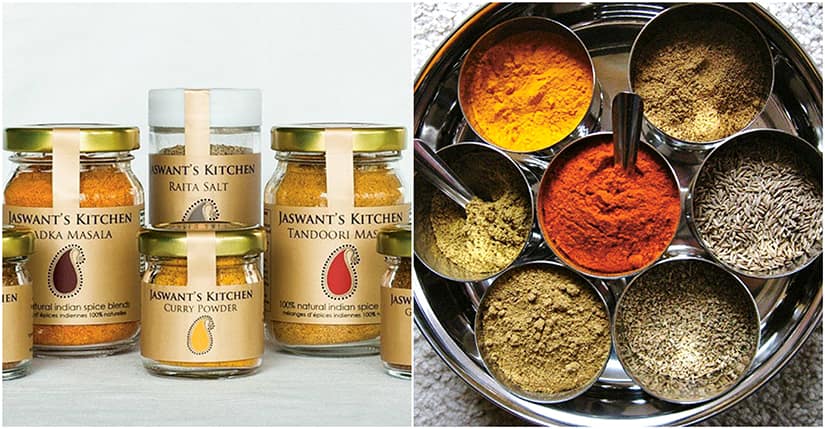 ON MAKING EVERYTHING BY HAND: "Whenever we had a food show, the whole family had to pitch in and spend the weekends preparing and packaging," says Simi. "We have staff help with that now, but my mom still roasts the spices, grinds them and blends them herself." ON

A FAVOURITE BLEND: "I haven't seen anything like our tadka masala," says Jaswant. "Typically, in Indian cooking, people chop onions, garlic and ginger, then fry them, along with the spices, to start the dish. This takes about 45 minutes and smells up the whole house. I made it into a dry blend that you just add water to. It reminds me of my grandmother's cooking."

ON FAMILY HOLIDAYS: "For the past few years, we've had themes," says Simi. "We'll pick a type of cuisine and try to make a full menu; we did Moroccan last Thanksgiving. My mom brings back spices from her travels and tries to recreate the flavours from those countries."

CAFE MOSAICS AND THE MOTH CAFE

WHO: Mom Thanh Lu and daughters Jillian and Khuyen Khuong
WHERE: Edmonton 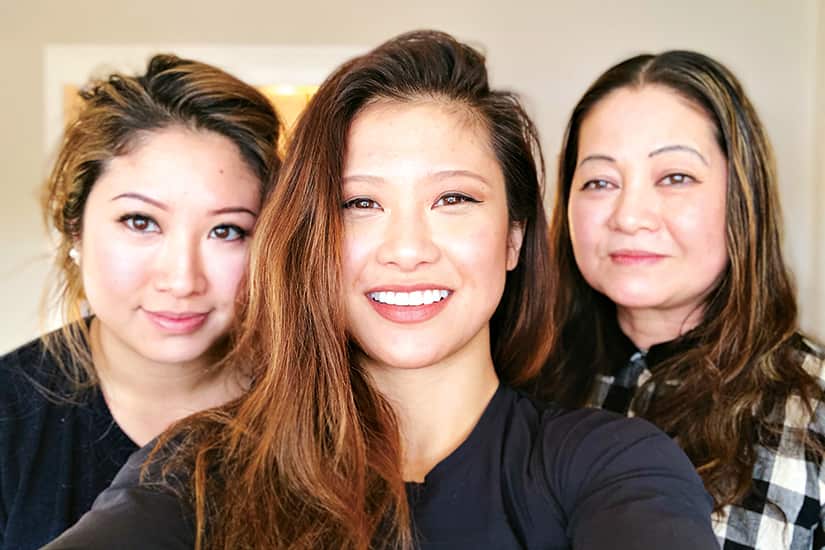 THEIR STORY: The family's 2009 purchase of Cafe Mosaics, a preexisting vegan and vegetarian restaurant, was brought on by necessity. Thanh's husband had passed away, leaving a bit of money, so the family decided to buy a restaurant they found in the classifieds. "It was a saviour for us," says Khuyen. "We were able to pay the bills." Luckily, Thanh's, Jillian's and Khuyen's diverse skills helped the restaurant thrive: Thanh has an excellent palate and is able to create vegan versions of classic dishes; Jillian knows how to manage people and run back-end operations; and Khuyen takes on the front of house and business strategy. Last December, the women also opened The Moth Cafe, a vegan hot spot whose interior was designed by Khuyen (she has a master's degree in architecture). 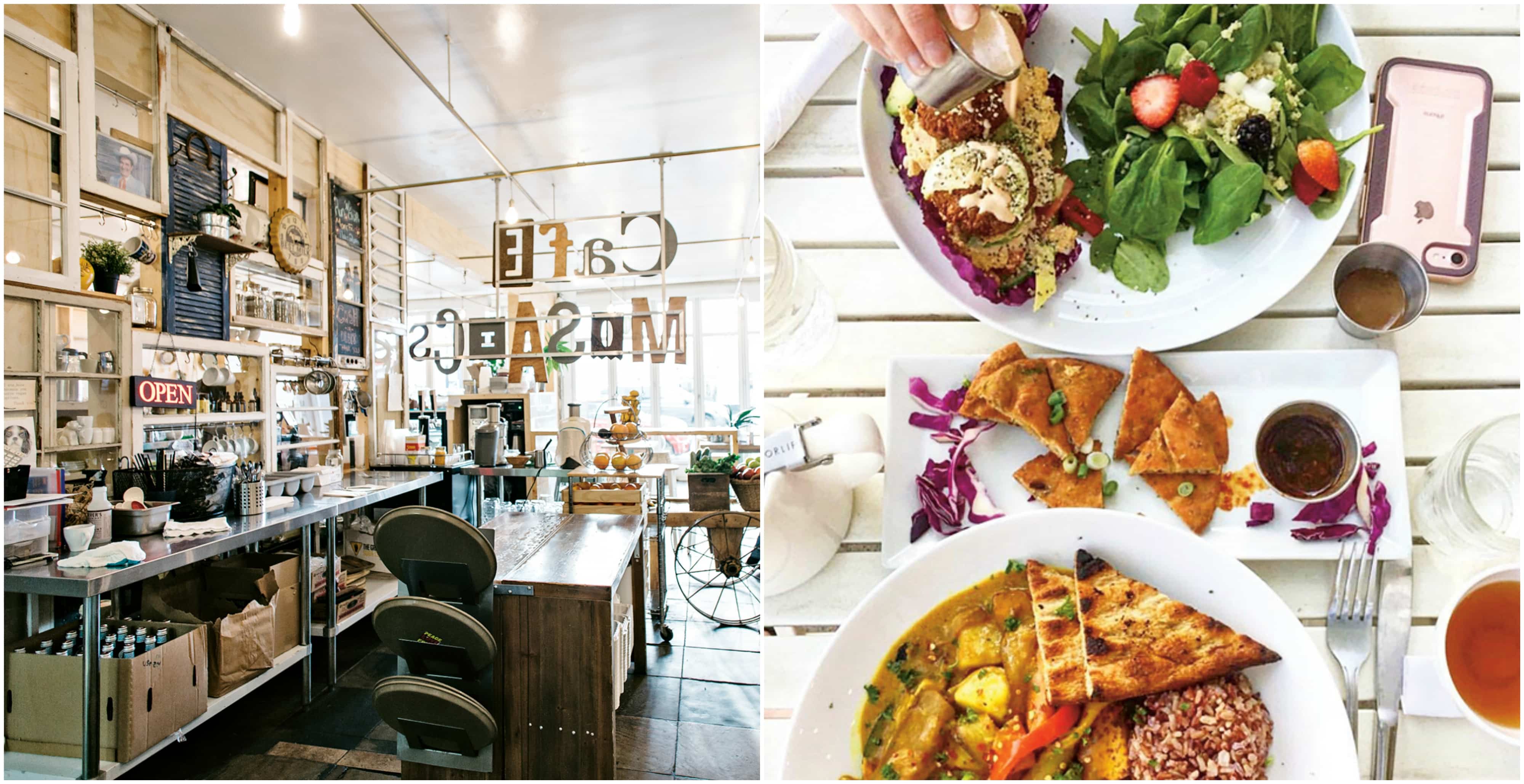 ON BUILDING MENUS: "I created a lot of the recipes myself," says Thanh. "They were inspired by Vietnamese food and my imagination. For some, I looked in cookbooks to learn about vegan and vegetarian cooking, then I made my own recipes."

ON THE BEST AND WORST PARTS OF WORKING TOGETHER: "They're the same for me," says Khuyen. "The best part is seeing my mom and sister on a daily basis. And the hard part is seeing them every single day."

ON A FAVOURITE MEMORY:"When we first opened Cafe Mosaics, the dishwasher kept breaking and I would have to stay late at night to clean up," says Jillian. "One day, we were closed and I could see my mom and sister lying in the booth section passed out from exhaustion. I realized I had such a good support system. I think if I were to do it alone, I wouldn't make it." 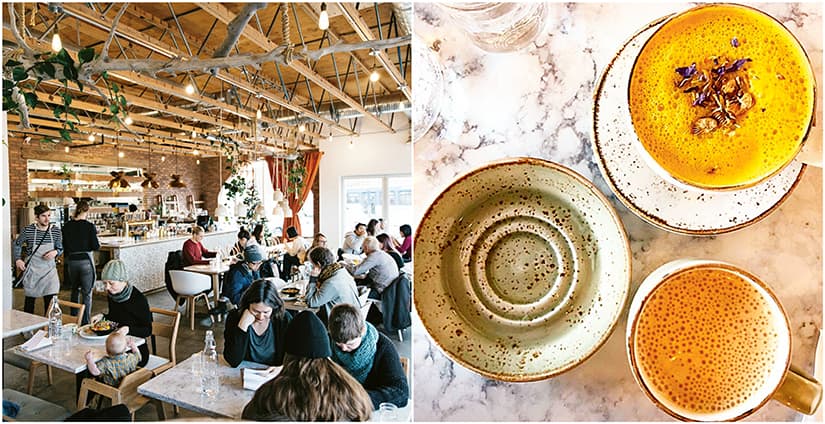 WHO: Mom Carol and daughter Belinda Bigold
WHERE: Winnipeg 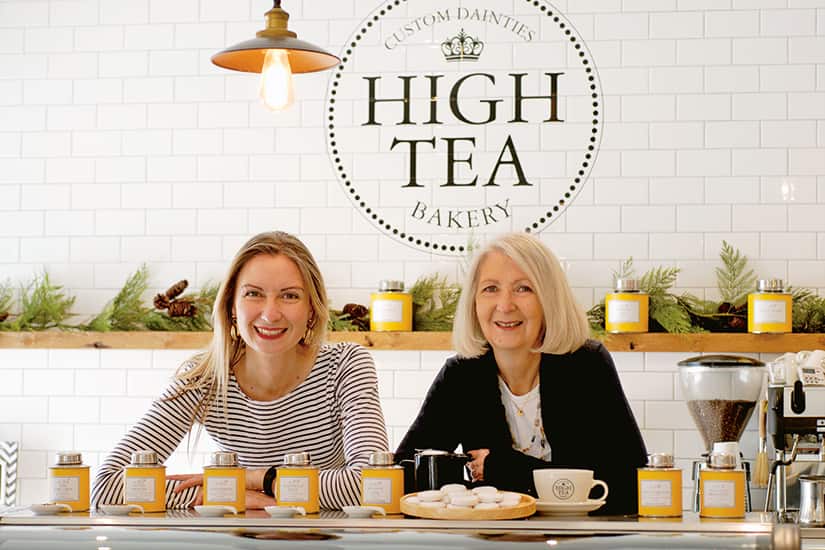 The business brains and the baking talent: Belinda Bigold and her mom, Carol, serve up cookies that look almost too pretty to eat.

THEIR STORY: Though baking has been a part of the Bigold family's DNA for decades, it wasn't until Carol decided to sell intricately iced cookies for a fundraiser that Belinda saw their popularity. "Mom was selling them for $3 a dozen because that was the cost of a bag of Oreos—she didn't see that people would pay more for quality," says Belinda with a laugh. They were so popular that people began to order them year after year. Belinda knew that her mom had always wanted to own her own business, and decided to give her a chance to further use her talents by opening High Tea Bakery in 2003 to sell the goodies—many from recipes handed down through the family. "The carrot cake recipe is from my husband's great-auntie Virginia McPhee, and the lamington cake is from my aunt Eileen Hayward," says Carol. Now, High Tea Bakery crafts some of the most beautiful sweet treats in Winnipeg. 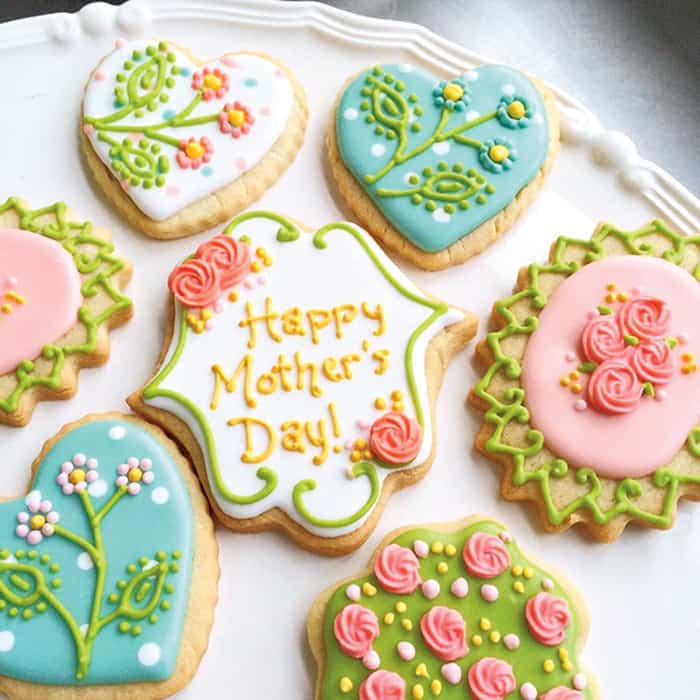 The sweets that started it all: Carol’s famous decorated cookies, gussied up for Mother’s Day.

ON THAT FIRST YEAR:"On opening day, we made $12.32 and thought, Woohoo, we're awesome," says Belinda. "We had nine cookie varieties when we started. I don't know how we survived."

ON HAVING NO PROFESSIONAL TRAINING:"We all have a natural artistic ability," says Carol of the women in her family. "We paint, we create different things—so the artistic side comes naturally. It was just mastering the technical side of it. Luckily, we also tend to learn things pretty quickly."

ON A PROUD ACHIEVEMENT: "We developed the recipe for our version of Imperial cookies together," says Belinda of the treats that were chosen to be served to the Queen on her 2010 visit to Winnipeg. "We spent months tweaking jams and finding the right combo. We really went to town and did a lot of testing because the recipe is so finicky. Now, the cookies outsell pretty much everything else in our bakery 10 to one." 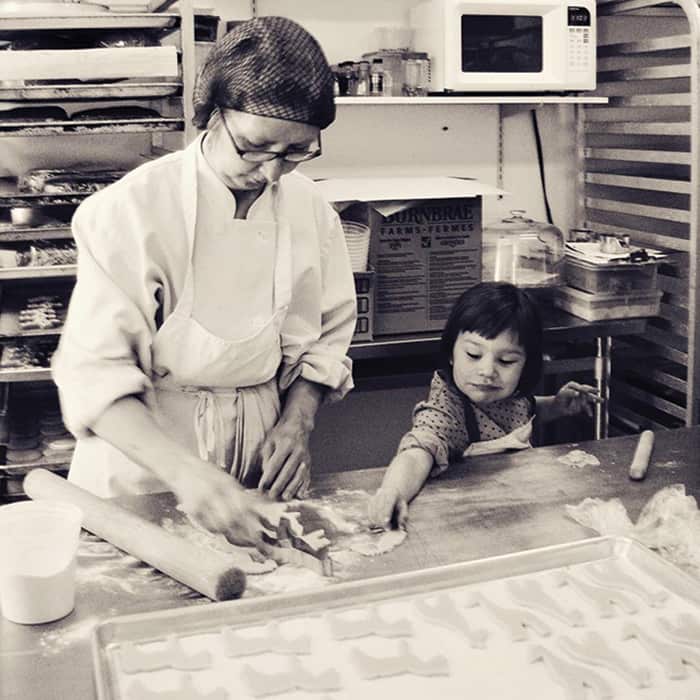 5 ways to improve your mother-daughter relationship

Make the most of the time you spend with your mother with our expert tips for improving how the two of you get along.