Share
Karen Lefave was at her 12-week ultrasound appointment when she learned the news. The technician pointed out two little hearts beating on the monitor: She was having twins. "It was the best moment, but I was nervous, of course," she recalls. They called her husband, Greg, who was waiting in the hallway, into the room, and Karen watched his jaw drop and a big grin spread across his face. "It was the happiest moment of his life," she says.

An unexpected turn of events
The mood changed dramatically three days later, when the Sault Ste. Marie, Ont., couple learned that Karen might be carrying a set of rare and high-risk monochorionic-monoamniotic twins—two babies sharing one placenta and one amniotic sac. In this type of pregnancy, there is a major risk of cord entanglement, and babies have only a 50 percent chance of surviving to 24 weeks. Karen and Greg got on a plane to Toronto to confirm the results at Mount Sinai Hospital.

An ultrasound of Karen's uterus showed two fetuses, unseparated in the womb with a knot at the umbilical-cord base and the two cords twisted around each other all the way down to the tiny abdomens. It also showed something else: One of the fetuses had a misshapen heart. Doctors at The Hospital for Sick Children (SickKids) eventually found that the main arteries had developed on the reversed sides, there was a hole in the heart and the pulmonary artery was severely blocked. Without major surgery, the baby would likely die within a year.

Karen and Greg were terrified, but they couldn't let their worry consume them. "We just thought we would find out everything we could to get them here," says Karen.

On April 20, 2014, 26 weeks into the pregnancy, Karen moved to Toronto to be monitored at Mount Sinai, with three ultrasounds a week and four stress tests
a day to check for cord entanglement. The rest of the time, she waited.

Though a regular pregnancy is about 40 weeks, monochorionic-monoamniotic twins are typically delivered around the 32- to 34-week mark because their shared placenta and amniotic sac make remaining in utero so risky. But the cardiologist monitoring Karen knew that a premature baby would have a lower chance of surviving a heart defect, and life-saving surgery wouldn't be possible until the infant weighed 5 1/2 pounds. So if Karen delivered early with a planned caesarean section, one of her babies would be in danger; if she delivered later, they would both be at increased risk from the cords. Added to this risk was the fact that the baby without the heart defect had been diagnosed with ventriculomegaly, an enlargement of the brain's ventricles that could worsen the longer she was in utero. It was an impossible choice. Karen and Greg scheduled a meeting with her pre­natal specialist and her cardiologist to make a decision.

Early delivery
But, on May 25—the morning of the meeting and 31 weeks into the pregnancy—Karen's water broke. Within an hour, she gave birth to a healthy (though premature) baby girl they named Georgia, and a baby girl with a potentially fatal flaw in her heart, Charlize (Charlie for short), who was born blue. Both of the newborns were rushed away immediately. Georgia was taken to the neonatal intensive care unit at Mount Sinai, while Charlie was sent to nearby SickKids, where she was given a drug to make her heart work until she could grow big enough for surgery.

For two months, Karen was back and forth between hospitals, never holding her daughters for long. Each of the twins was hooked up to tubes, and no one knew when Charlie's heart would be fixed. Karen recorded the day-to-day struggles on a Facebook page she called "The Twinkies" to inform concerned family and friends about the girls' development.

Finally, when Georgia was released on July 26, Karen found a glimmer of hope. She and Greg took Georgia straight to SickKids and laid her next to Charlie. "Charlie was incubated, but under her mask, she started smiling," says Karen. "And Georgia cuddled into her and smiled, too. It was the coolest thing." It wasn't just Karen and Greg who needed Charlie to get better; her twin needed her as well. "We started to feel like a family."

Less than two weeks later, on Aug. 5, Charlie was finally ready for surgery. At 5 1/2 pounds, 10-week-old Charlie had her chest opened up and a shunt inserted. Her surgeon, Dr. Glen Van Arsdell, head of cardiovascular surgery at SickKids, saw her tiny heart was too thick to be repaired (a dangerous side-effect of the flaw that makes it difficult for the heart to fill with blood), but he could at least buy her time until it was strong enough for a more major operation. By mid-September, Charlie, Georgia and Karen were moving back to Sault Ste. Marie. They were finally getting the newborn experience in their own home, but it didn't feel quite right. Charlie had a feeding tube and she wasn't lifting her head. "We didn't know what was going to happen or when her next surgery was going to be," says Karen. "We were very much on pause." As Christmas approached, Karen wanted to celebrate, but the weight of Charlie's unknown future made it difficult to enjoy the holiday. "I was happy because we were home, but everything was so different from what I had anticipated." 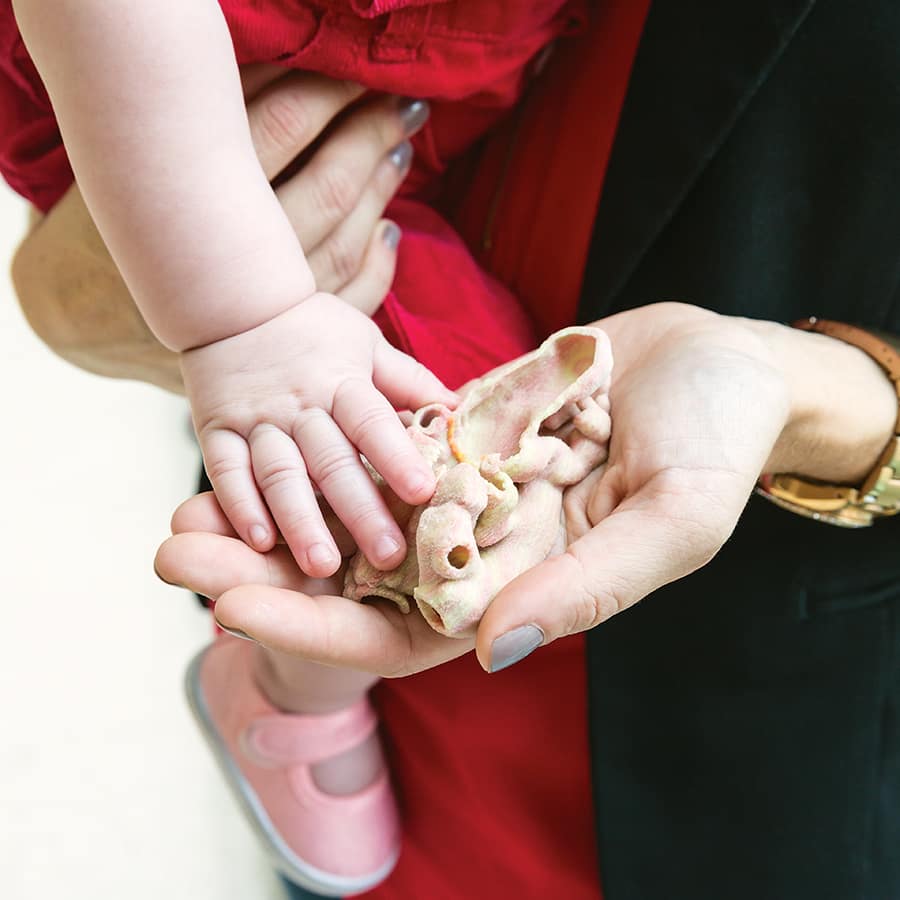 New year, new hope
The new year arrived and, soon after, so did news of Charlie's surgery. Charlie had put on some weight, and Dr. Van Arsdell used an MRI to make 3D models of her heart to plan his strategy for rebuilding the unusually shaped organ.

Karen had been through months of talking with doctors, nurses and specialists, so she knew the myriad ways the surgery could go wrong. "Then, that morning came where all those risks you were warned about were real," she says. "We spent an hour or so cuddling Charlie, trying to fight back the tears so she wouldn't sense our helplessness. Then, a man walked in and asked us to pass him our daughter, and we did, not knowing if we'd see her alive again."

In the first surgery, Dr. Van Arsdell had needed to make the hole in Charlie's tiny heart bigger. Now, to fully fix the organ, he would need to core out her arteries from what was left of her heart and relocate them on the opposite sides—and hopefully do it all without cutting out the heart's electrical system that makes it beat. No one knew if this would be possible or if Charlie would simply get another short-term solution; it all depended on her heart.

Karen and Greg waited for six hours before their cardiologist, Dr. Fraser Golding, finally emerged. The surgery had successfully fixed her heart. Greg broke down with tears of happiness. "It was a moment I will never forget for as long as I live," says Karen. "Our precious little girl was given a second chance at life and the opportunity to grow and bond with her twin sister."

Now, Karen is looking forward to her first Christmas with her two healthy girls. "Our babies are now walking, silly, babbling toddlers." She twists one of the red curls at the nape of Charlie's neck around her finger and muses about the twins running around and opening presents on Christmas morning. One of those presents is going to be a scrapbook based on Karen's online entries. "When I look back on it, I have no idea how I did it," she says. "Sure, it sucks that I didn't get to know what a normal pregnancy is like, but look what I have now. And I've got so many stories to tell them about what they overcame to get here—I wouldn't trade that."

The miracle of 3D printing
Meet the newest medical marvel: the 3D printer. Doctors have begun using the printers in the past few years to make tangible models of organs based on MRI or CAT-scan images. Dr. Glen Van Arsdell, who performed Charlie's surgery at Sickkids, says 3D models, like the one Charlie had, make surgical solutions to complicated problems far more obvious. "It gave us a really good road map going in so we could make decisions more efficiently in the operating room and know where to look for problems." Currently, the main function of 3D printing in hospitals is visualizing and planning surgeries, but in the future, models could be used more prevalently for providing surgeons with hands-on training by practising full surgeries on the models.

Check out how one couple blended the best part of their own traditions to celebrate their baby's first holiday season.

This story was originally part of "Two Hearts" in the December 2015 issue. Subscribe to Canadian Living today and never miss an issue!