Life can deal us some pretty heavy blows. Sometimes, it pulls the plug right out from under us. But the key to happiness, success and, ultimately, survival is resilience. Here's how FedEx Express Canada president Lisa Lisson leaped over obstacles and learned the unsung secret of life.

You know what they say about resilience—when the going gets tough, the tough get going. Those who weather the storm and survive getting punched in the gut and hit upside the head eventually come out the other side, after the battle, ready to fight another day.

In a study published in the Journal of Personality and Social Psychology in 2010, researchers found that adversity in life isn't always a bad thing. In fact, people who experience some lifetime hardship have higher satisfaction levels and a more resilient response to stress compared to both those who suffer high levels of adversity and those who never experience tragedy. That is to say, what doesn't kill you really does make you stronger.Similarly, in 2013, the Association for Psychological Science in Washington found that withstanding short periods of adversity can help one better cope with stress. In short, resilience isn't something we're born with; it requires mastering. Those who practise self-care and optimism, rely on a social circle for help and support and follow that "Keep calm and carry on" mantra are more likely to bounce back from even the darkest of times.

It's not that tragedy and heartbreak are easy to overcome; it's quite the opposite. Lisa Lisson has discovered that truth more than once in her 49 years. In her last year of university, Lisa lost her 47-year-old father to brain cancer. At the time, the 21-year-old was weeks away from graduation—a milestone her father hoped he'd see. "I kept saying to myself, ‘Why did it have to happen to us?' Then, I realized I wasn't going to get the answer I was looking for," she says. "I couldn't change what happened. I could either continue being miserable or learn from this experience." She chose to put the effort into thinking positively and changing her outlook. Life threw her another curveball when her best friend's sister was killed by her abusive husband. "I learned then that it's important to live every day to the fullest."

So that's what Lisa did. She married her high school sweetheart, Patrick. They bought their dream home in Burlington, Ont., and had four kids and plenty of friends. They went on date nights and pursued careers that challenged them. Life was idyllic. But then, one night in August 2007, Lisa was awakened when she heard a thump. She found Patrick—a fit, healthy 38-year-old—on their bedroom floor. He had suffered a massive heart attack and wasn't breathing. "I felt powerless and paralyzed, but I also had choices. I chose to believe Patrick was going to make it. I thought, If I believe there will be a miracle, I'll get one."

Patrick didn't pass away that night, and Lisa remained positive, holding onto the hope that she'd get her miracle. For two years, her husband was in a vegetative state. When the doctor Lisa trusted most finally told her it was time to let go, she was brought to her knees. 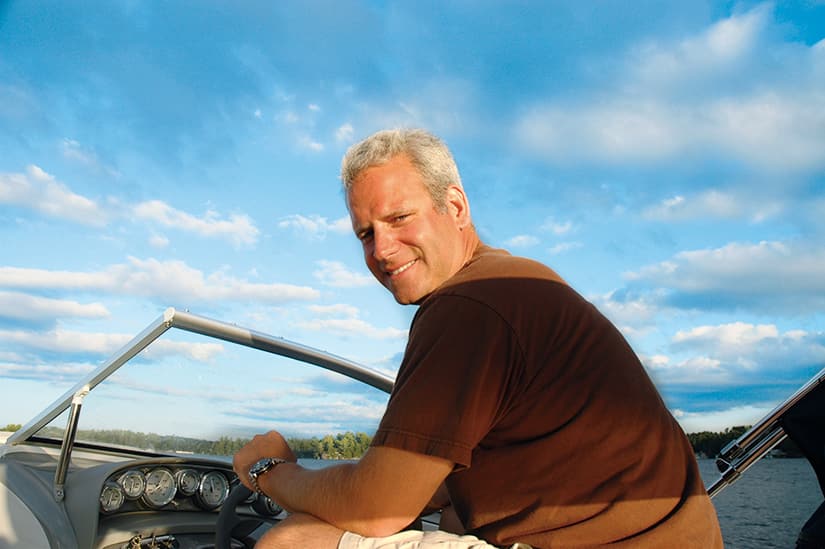 Patrick boating on Lake Muskoka the weekend of his heart attack.

She wrote about taking her kids to see their father one last time in Resilience, a book about surviving adversity and what she's learned along the way. "Come say hi to your dad and give him a kiss, then I'll take you to the fair," she writes. Maintaining her composure, she watched as each child (all too young to know this was the end) kissed him goodbye, and then she took them to the fair. The next night, she returned to the hospital, crawled into bed with the love of her life and held him as he died in her arms. It was August 2009.

It would've been understandable for Lisa to fall apart, and there were moments when she didn't know how she'd persevere. "It didn't happen overnight, but I had to find resilience. I realized that if I was going to survive, I had to take a different approach to how I thought my life was going to turn out."

Surviving made her stronger than ever. She threw her heart into her kids and her career, and she thrived. Nearly three years after Patrick's heart attack, and a year after he died, Lisa was made the first female president of FedEx Express Canada. "Instead of focusing on what I didn't have, I focused on what I did: four kids, family, friends and supportive colleagues," she says. "I surround myself with people, places and things that inspire me. Today, I continue to look ahead, never behind." Lisa pictured with her son, Jack, as well as her mom and stepdad, celebrating an award won at school—Lisa's parents are a huge source of support for the whole family.

Resilience isn't always about overcoming trauma or tragedy. Hardships come in various forms: a lack of motivation, a job loss, aging parents, a difficult colleague or a goal that seems forever out of reach. Here's how Lisa Lisson learned to defeat obstacles

1. GET RID OF NEGATIVITY
Lisa was positive from the get-go. The night of Patrick's heart attack, it took 45 minutes for first responders to get a pulse. By the time he got to the hospital, she was told it didn't look good. But she remained positive, believing he'd pull through. Channelling positivity allowed Lisa to keep a clear mind, consider the choices before her and make the best decisions for Patrick and her family.

2. LEARN TO COMPARTMENTALIZE
"When I left the hospital, I trained my mind to put whatever happened while I was visiting Patrick aside. I moved it into its own compartment and told myself, 'Now I'm going to be with my kids' or ‘Now I'm going to meet a friend for wine,' " says Lisa. "You need to park it in the back of your mind, not carry any guilt and allow yourself to move on and come back to it when you need to."

3. LIVE IN 24-HOUR INCREMENTS
"Thinking about the past and worrying about the future was robbing me of the beauty around me," says Lisa. So she practised being in the moment and coached herself to leave the past behind her and not to get too caught up in what the future might hold. Living in 24-hour increments will ground you and keep you from feeling overwhelmed.

4. FEEL GRATITUDE
Looking for silver linings builds resilience. "I had to find the positives," says Lisa. "What happened was terrible, but what if Patrick had the heart attack while driving with the kids in the car? I could've been a widow and lost all my children." Instead of focusing on what's been taken away from you, be thankful for what you have.

How to achieve any goal

The power of resilience