For southern Ontarians, a trip west along the Queen Elizabeth Way, or QEW as it’s affectionately known, is usually focused purely on the end goal: Niagara Falls and, often, the U.S. border crossing.

But maybe this year presents the opportunity to stop and smell the proverbial—and real—flowers en route. The Niagara region is ripe with things to see, do and taste.

1. Visit a villa at Dundurn castle

Once upon a time— more precisely, the mid-1800s— Dundurn National Historic Site was the home of railway magnate/politico Sir Allan Napier MacNab, but now this beautiful Italianate villa and grounds, built on the site of an 1813 military encampment, is open for visiting. Take the guided tour through 40 upstairs and downstairs rooms to see how both halves lived, then stroll freely through the fabulously restored Historic Kitchen Garden, with its more than 200 heirloom varieties of flowers, veggies and fruits. hamilton.ca

2. Hail our heroes at hmcs haida

From the refined Dundurn setting, do an about-face and drive to Pier 9 in Hamilton’s harbour to check out HMCS Haida National Historic Site, not only the Royal Canadian Navy’s most decorated warship, but also the world’s last remaining Tribal-class destroyer. Explore the decks, search the horizon for enemy craft, try your hand at Morse code and learn about the ship’s distinguished battle history, which includes action in the Second World War, the Korean War and the Cold War. pc.gc.ca/en/lhn-nhs/on/haida

3. Marvel at majestic waterfalls in Hamilton

Did you know that Hamilton is known as the City of Waterfalls? It’s true—there are more than 100 within the city limits. The Devil’s Punchbowl, a large bowl-shaped gorge with colourful rock striations and two cascading ribbons of water, is one of the most spectacular. Views from the lookout also take in Hamilton Harbour, Stoney Creek and, on a clear day, Toronto’s skyline. conservationhamilton.ca 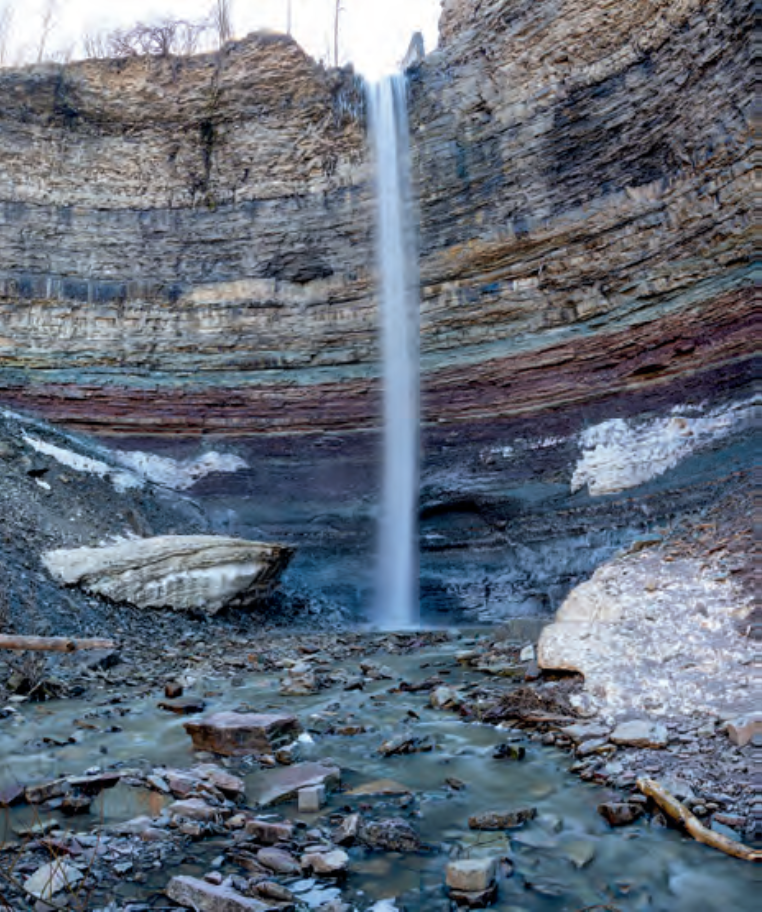 in Grimsby For a different kind of natural high, head over to the coast of Lake Ontario to Biggar Lagoon Wetlands Bird Viewing Platform in Grimsby, where several pools of water provide habitats for birds. Common species like ducks, geese, sparrows and chickadees abound, but if you’re lucky you may catch a glimpse of a junco, teal or merlin. Parking is limited; however, if you can score a spot, this is a peaceful, quiet respite from the busy world. biggar-platform.edan.io

5. Fill up on fruit and flowers near Beamsville

The verdant Niagara Region is dotted with markets, wineries, garden centres and family-friendly pick-your-own farms. Take advantage of this fresh bounty by popping off the QEW and heading inland to Highway 81, which travels roughly parallel, stopping at any number of small produce vendors to pick up local goodies (pickyourown.org is a good resource to find one on your route). On the outskirts of Beamsville, turn left onto Lincoln Ave. to check out The Good Earth Food and Wine Co., a farm and winery that features a charming upscale bistro. Note: It’s dog-friendly, but may not be appropriate for boisterous kids who’ve been stuck in the car all day. goodearth foodandwine.com

6. Soak up history in St. Catharines

Just off the QEW in St. Catharines you’ll find The St. Catharines Museum and Welland Canals Centre. Here, at Lock 3 on the canal system that takes ships from Lake Ontario to Lake Erie, bypassing Niagara Falls, you can view freighters navigate the waters. Back on the road,head straight on to Niagara Stone Road/Regional Road 55, which will take you past the NEOB Lavender Boutique and Lavender Field right into picture-perfect Niagara-on-the-ake, where you can visit historic Fort George, see a play at the Shaw Festival, or simply wander the venerable, treelined streets. niagara wellandcanal.ca; stcatharines.ca; neobniagara.com; niagaraonthelake. com; pc.gc.ca/ en/lhn-nhs/on/ fortgeorge; shawfest.com

7. Knock yourselves out in Niagara Falls

From Niagara-on-the-Lake, the Niagara Parkway takes you gently into Niagara Falls, with scenic vistas of the Niagara River on your left. Stop at the River-Brink Art Museum, or the Laura Secord monument in Queenston Heights Park, to learn about some of the region’s more illustrious residents. It’s your last chance to take it easy before you hit the busy Falls area and explore this popular city. Gape at the rushing falls, go zip-lining, gamble at the casinos, take the kids to the carnival-like Clifton Hill, visit the botanical garden—there’s something here for everyone. riverbrink.org; niagarafallstourism.com