Share
"The little fairies I saw were about, I would say, the size of two-year-olds, that height," says 97-year-old Mary Flynn of Otterbury, N.L. "When I came down the way, I saw a red bandana and it blew across the road. When I looked to see where it went, I saw two little fairies by a tree with bright red windbreakers and little peaked caps."

Whether they're fairy stories, tales of the early settlements or other otherworldly yarns, Newfoundland's long-standing oral traditions have always been a powerful force. But it's the fairy stories, in particular, that are rife on the Rock. Full of wonder and magic yet anchored by the real world experiences of Newfoundlanders, fairy folklore is as culturally important to the province as any historical building or artifact.

Not your everyday fairy
The province's rich fairy folklore traditions originate from the Scottish, Irish and English who brought over their stories when they settled on Newfoundland in the 1600s. These fairies (also known as the Good People or the Little People) are not of the Tinker Bell variety; the creatures come in all sizes and have been glimpsed in the shape of children, adults, glowing lights and even animals. They're mischievous and apt to entrance you, cause trouble and lead you astray. And they definitely don't have wings.

That most of Newfoundland's fairies are described as troublemakers is somewhat surprising. "The majority of fairies are not good fairies," says Barbara Rieti, who did a PhD thesis in folklore, on the subject of fairies, at Memorial University of Newfoundland in St. John's, N.L., and later authored the book Strange Terrain: The Fairy World in Newfoundland (ISER Books, Memorial University, 1991). "They play tricks and lead you over the edge or a cliff. They'll change people. Or you'll get a fairy blast when they hit you, and then nasty stuff comes out of the wound, like sticks, balls of wool and fish bones."

Wounds dripping with balls of wool and fish bones (and the obvious entertainment factor in these tales) aside, fairy stories often held deeper meaning. "To me, fairy stories had to do with knowing and not knowing, a very important element in Newfoundland culture," says Rieti. "Because communities were small and isolated but interconnected, knowing someone, knowing who they are and where they come from was important." Fairy stories weren't just about fairies; they were about living through challenges and surviving, be it in the woods, on the water or down the trail.

Nature versus civilization
"Fairies aren't so much to be feared as they are to be respected and, where possible, avoided," says Dale Jarvis, intangible cultural heritage development officer for the Heritage Foundation of Newfoundland and Labrador. Like Rieti, he believes fairy folklore is deeply connected to the natural world. "In a sense, fairies are nature personified," says Jarvis. "They're neither good nor bad; they don't follow human rules. Fairy stories are, in a way, how we talk about our interaction with the unpredictability of nature."

In many cases, the stories are about regular Newfoundlanders who have incredible things happen to them. Someone picking berries will hear fairy music, become entranced and lose their way in the woods; days later they will return home, not knowing what happened. If feeling mischievous, fairies might swap a baby for a changeling, a sickly being not entirely human. Fairies may join children for tea on the beach, spirit a loved one away on a horse or place a curse, making a family member mute. Fairies could even take people away and drown them in the sea. Much of the province's fairy folklore exists at the point where the civilized world and nature intersect. "The stories take place at the end of the garden, where people go to pick berries, in the meadow, at the beach, or slightly away from the house-in the border zone between the wild and the tame," says Jarvis.

Charms for protection
With potential fairy-wrought disaster always near, there are many traditional charms Newfoundlanders use for protection. Keeping bread in your pockets can ward off the fairies. Or, if you are in danger of being led astray, you can turn an article of clothing inside out, putting you back on the right path (it confuses the fairies and breaks their spell). Money is also a charm. Some locals pin silver coins to their clothing or place coins inside baby carriages. Religious metals have the same effect. "The tricky part," says Jarvis, "is that, for every story you hear and every rule about the fairies, there's another story that says the opposite." It seems that, above all else, Newfoundland fairies are capricious.

In days past, fairy stories may have been used keep children from wandering too far into the woods or into a forbidden area —an imaginative safety mechanism, if you will. A parent might say, "Don't go too far because the fairies might get you." Other times, fairy stories may have been used to cover or deny a violent incident, such as a beating or a physical or mental illness. It would be common to hear that a community member was "away with the fairies" or "touched by the fairies." Whether to entertain, teach, keep children safe or manage a difficult circumstance, fairy talk has always mingled with Newfoundland's more tangible cultural traditions.

Fairy central
Fairy folklore is particularly strong in the Conception Bay area of the Avalon Peninsula. In Cupids, the first English settlement in Canada, fairy stories have had centuries to take root. Cupids Legacy Centre, a museum that includes an archaeology field lab and fairy garden, is committed to keeping fairy folklore alive and thriving in the community. "Newfoundland isn't just about historical artifacts," says Peter Laracy, the centre's general manager. "We're also about music, dance, poetry, language and stories. It's the intangible traditions that reflect who we are and what we are."

Laracy firmly believes that the beginnings of Newfoundland culture are based in oral storytelling, which he considers to be the most fundamental form of communication. It's a different level of connection; there's trust between the storyteller and the audience, one in which those listening suspend their normal concept of the world and just believe. He finds that today's Newfoundlanders are still drawn to the otherworldly and inexplicable. "I think people want to let go of the fact that everything has to be explainable," says Laracy. "Listening to and telling fairy stories frees the mind and allows you to believe that anything is possible —there's a freedom of human expression."

The captivating quality of fairy stories lives most fully in the actual telling. Laracy says a good fairy story and storyteller can evoke emotions such as fear, wonder, awe, sadness and joy. Every year, Cupids Legacy Centre hosts an evening that celebrates fairy culture. On the rooftop garden, which is decorated with fairy sculptures, the crowd is entertained by a fairy play. Then, the community's renowned storytellers (Mary Flynn being one who has seen fairies on several occasions) tell dramatic fairy stories in a room full of community members and fairy enthusiasts who hang on every word. 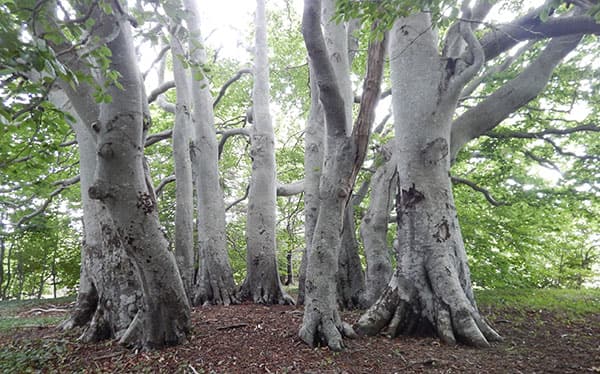 Many of the stories recount fairy sightings, strange happenings or talk of fairy paths and fairy ground (the places Newfoundlanders avoid for fear of disturbing the fairies). In the Conception Bay North area, there's an ancient fairy ring, a circle of 13 massive beech trees surrounding barren ground, where fairies have their meetings, of course. Legend has it that nothing will grow on fairy ground. It's a quiet, spooky place, ripe for otherworldly gatherings.

A future for fairies
Like the beech trees anchored on fairy ground, fairy folklore has been around for a while, centuries even. Folklorists are often asked if the stories and traditions will eventually die out. Dale Jarvis is adamant in his response. "No, I think we're seeing a revival in fairy stories. People may not believe in them the same way they once did, but there's a growing understanding here in Newfoundland that this is a part of our culture, part of our traditions." Barbara Rieti is of the same mind. "What has surprised me over time is how persistent fairy stories have been. People will say that the tradition is receding, but fairy stories never really recede."

Through fairy stories, Newfoundlanders connect to their history, to each other and to nature. They all have a fairy story to tell —and it's one likely passed on from generation to generation. The stories themselves are full of delightful drama, adding a distinct cultural flavour that isn't found anywhere else in Canada. And even though the fairies might be, frankly, terrifying, every local enjoys connecting with an audience (of one or 100, it makes no difference) to share a tale. "What I love about fairy stories," says Jarvis, "is that a real person has had this magical experience. These stories are about survival, change, hope and resiliency. And who doesn't want to believe in magic?"


Learn how to turn your little princess into a fairy princess with our helpful guide.

The fairy folklore of Newfoundland