Share
Share
Chanel’s long anticipated annual M étiers d’Art, or Métiers de Karl they should call it, finally took placed in Salzburg, Austria last Tuesday, to the dismay of all other Pre-Fall 2015 collections that will pale in comparison. The fashion crowds descended on the legendary Austrian city for the annual exposition of some of the most exquisite hand-crafted techniques in the world. The French house's M étiers d’Art endeavor has captivated fashion followers and the public alike for its theatrical set design and otherworldly sophistication  that only Chanel’s other opulent runway shows rival. M étiers d’Art was created as a method of honouring the fine craftsmanship from the artisan ateliers in Chanel's vast portfolio; notable houses include Lesage for its embroidery, Desrues for its costume jewellery and accessories, and Lemarié for its feather and flower creations. The first Chanel M étiers d'Art show was held in 2002 in the brand's Paris-based haute couture salon on rue Cambon, and presentations have only exploded in grandeur ever since. The house flies its guests out to some of the world's most coveted travel destinations that inspired Mademoiselle Chanel herself, including Tokyo in 2004, Shanghai in 2009 and Bombay in 2011. Every small detail on set is painstakingly considered in order to completely immerse the viewer in the story behind the collection. 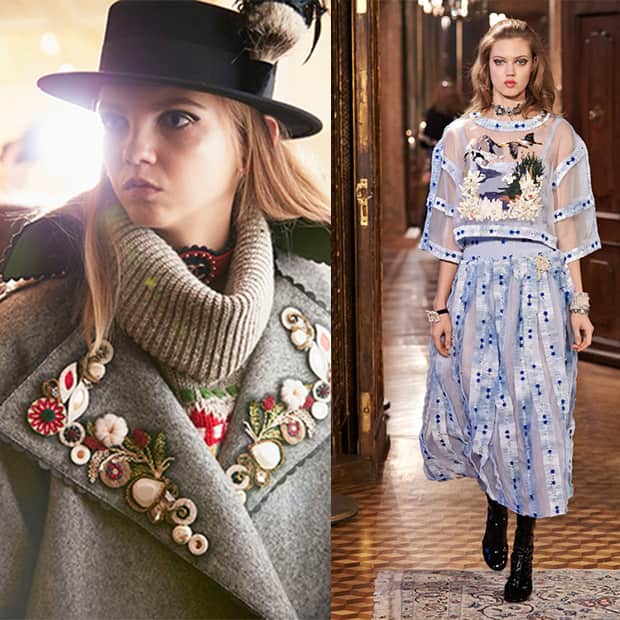 This year, Lagerfeld's Chanel reverie took place at the Schloss Leopoldskron palace in Salzburg, Austria, which most will remember as the filming location for The Sound of Music. Set against the charming landscape of Tyrolean country and amid the golden opulence of the Schloss palace, kitsch floral appliques, peasant knits  and muted hues von-Trapped us in a spellbound lust for colder, snowier weather. This, my friends, is how I wish I could dress for a Canadian winter. High-necked collars, choker necklaces and lace-up boots were recurring accessories and the classic Chanel jacket made appearances in variations without lapels and finished with coloured piping detailing. 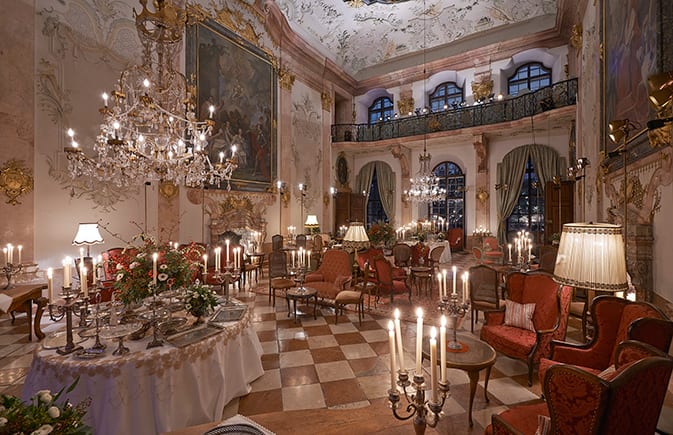 The Marble Hall at the Schloss Leopoldskron. Photo by Olivier Saillant on chanel.com

Models outfitted in tubular-shaped garments floated through the Marble Hall, around tables piled high with food that no doubt went untouched by the end of the night. The surprisingly wearable collection, perhaps influenced by equally understated German design, led into frilly dresses. A whipped white concoction was the icing on top. Lagerfeld continued to demonstrate his emulation of the zeitgeist, not only by including the rising Kendall Jenner (of the Kardashian clan) on the runway, but also debuting large Princess Leia-like 'braidphones,' a hairy variation on his previous venture into fashionable tech with his $5,000 leather headphones for Chanel's Spring/Summer 2014 showing. Being a leader rather than a follower of the times, jewelled barrettes also made a sleek and sweet return, pulling a half-updo back into place. I sense a slew of Chanel DIY's on the way.  The beauty look balanced clean, slightly shimmery complexions against demure smokey eyes accented with thick golden eyeliner. 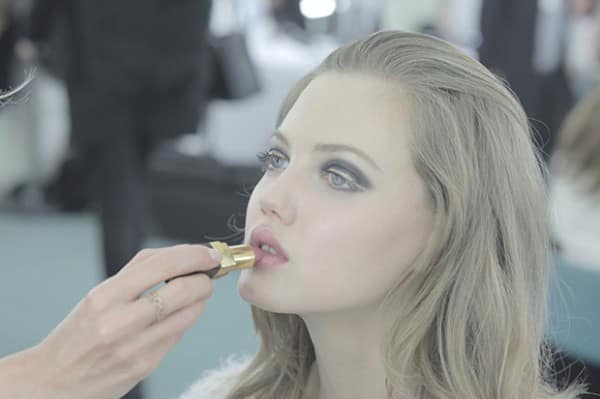 M étiers d’Art Paris- Salzburg was preceded by a Lagerfeld-directed video titled, ' Reincarnation,' an introduction to the history behind this year’s show.  It recounts the story of how Mlle. Chanel's now eponymous boxy tweed jacket design was said to have been inspired upon her noticing a similar design on a lift operator at Hotel Mittersill in Austria. Starring Cara Delevingne and Pharrell Williams as reincarnated royalty, the E mpress Elisabeth of Austria and Franz Joseph I, Emperor of Austria, the story charts the tale of Mlle. Chanel, followed by a folklore-like twist as the hotel comes to life at night. Both stars lend their vocals to the Williams-composed tune, "CC The World." The finale of this year's Chanel spectacle came with the sight of Delevingne apathetically eating what must have been a delicious Austrian pastry as Karl walked her through the dining room turned runway at the end of the show. Leave it to the British Fashion Awards' Model of the Year to keep it real, even at a Chanel show in affluent Austria. For more style news, visit our Style Desk blog.