Share
Share
Make your pup's next trip to the tub easier on his or her skin — and the environment. A little-known fact about me: I'm a crazy dog lady. There's nothing I love more than my little monsters. I'm Mum to two terriers, my teeny tiny eight-year-old Yorkshire terrier, named Parker, and my almost-12-month-old Norwich terrier, Brooks. [caption id="attachment_4285" align="aligncenter" width="426" caption="My doggers: Brooks and Parker"]

The first job I had that I truly fell in love with was when I was working at a dog grooming salon in Ottawa called Dawn of a New Day.  A major part of my job was bathing all the doggies that came in...and sometimes cats (lion clips anyone?). Just like a hair stylist at a salon would do, before the bathing commenced I would have to diagnose what the dog's (or cat's) hair and skin needs were. We had roughly 12 different shampoos on hand to choose from, and picking the right one was integral to the grooming process.

Too many times to count, dogs would come in with skin concerns and greasy coats. Why? Because owners were using their regular human shampoos on them. Don't do that! Human skin and dog skin have different pH levels (dogs have significantly higher levels), so using a human shampoo can cause itchiness, dryness and hot spots on their skin. 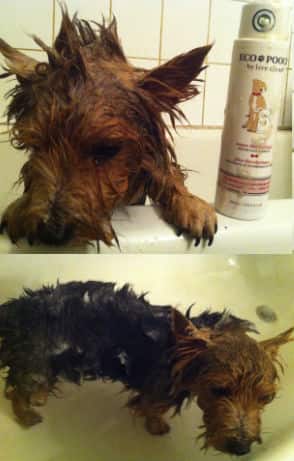 [/caption] With my beauty editor credentials and years of bathing experience, I think I'm the right gal to be testing Canadian beauty company  Live Clean's newest offering: Eco Pooch. The line is coming out with five new shampoos — and I decided to try out the Super Deodorizing Baking Soda Shampoo. I also happen to have the perfect dog to test out the deodorizing shampoo: Brooks, my Norwich. Why, you ask? Because this type of breed is hand stripped and only should be bathed when necessary; you don't want to strip the oils from his ultracoarse, wiry coat. So minimal washing, combined with daily walks and regular dog park visits, makes this one ridiculously smelly dog. [caption id="attachment_4265" align="aligncenter" width="296" caption="Denver the cat is photo bombing."] 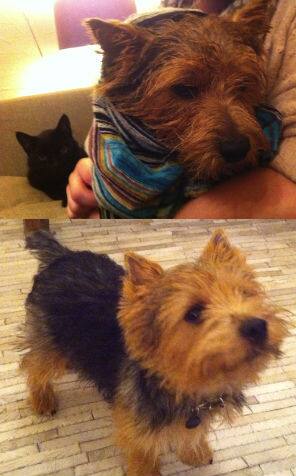 For a shampoo made of 98 per cent plant ingredients — it's also free of all those nasty chemicals like sulfate, paraben, phthalate and phosphate – I was truly shocked at how well it preformed. It took no time at all to create a nice thick lather all over his pelt. And a little shampoo really went a long way on Brooks's 15-pound frame. I could probably get 20 more shampoos out of the 400 mL bottle, so it would last several washes for larger breeds too.

The shampoo was easy to rinse off, which is not always the case. One of the most important parts of bathing any animal is making sure  all the shampoo is 100 per cent gone, because leftover suds can leave skin irritated and lead to hot spots. You want the fur to literally squeak when you tug it.

I was not anticipating that his super coarse coat would end up feeling soft, but it did, and it looked shiny too. But my favourite thing about the shampoo was that it didn't leave a scent behind – it just neutralized all of Brooks's stink.

Eco Pooch by Live Clean is $9 each.  Available at Wal-Mart.