Share
Share
This past spring I attended a LensCrafters event that was celebrating prescription sunglasses. One of the jaw dropping stats that I've retained from the soiree was that only 11% of the glasses-wearing population in America owns prescription sunglasses. Pretty low, no? I'm not a prescription wearer myself, but I'm surrounded by the visually challenged. Everyone in my family, most of my co-workers and my boyfriend all wear glasses. It used to upset me that I didn't need them as wee child, so much so that  I begged my mom to buy me a pair of fake glasses...she did and I wore them almost everyday. The "I wish I had horrible eyesight" phase eventually pasted and now I know I'm lucky to have 20/20 vision because it gives me freedom—especially the freedom to wear any kind of sunglasses I like. Even the $5 ones from Kensington Market. But not everyone is so lucky. Case in point: Tom—my boyfriend. He's as good as blind without his peepers—but he also happens to be frugal, really frugal. He should fit into that 11% but alas he doesn't own a pair of prescription sunglasses—never has. In his on going struggle to have decent vision on sunny days he's come up with some cost-effective strategies. Idea #1: Always wear a baseball cap to shield the sun. [caption id="attachment_3027" align="aligncenter" width="276" caption="Idea #1: Always wear a baseball cap."] 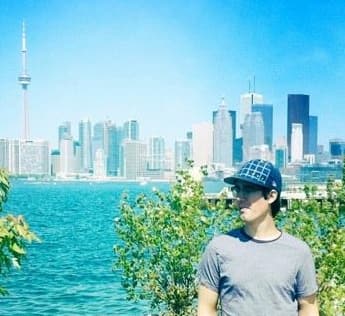 Idea #2: Buy a huge (but still cheap) pair of sunglasses that will fit over your eyeglasses. Like these beauties below. 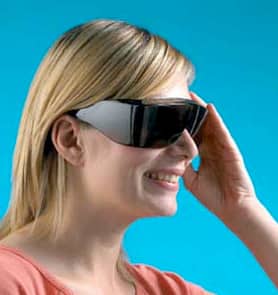 Idea #3: Pop out a pair of lenses from an older pair of eyeglasses. Using a glue gun adhere them to the inside of a cheap pair of sunglasses with a very dark or mirrored tint. Viola! Your very own homemade pair of prescription sunnies! This is no joke, he made these when we went down south on vacay to Punta Cana. 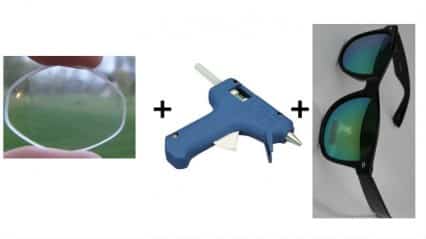 Yes, he's pretty crafty but as you can see it was getting to be a joke. So when I was approached by LensCrafters to experience their Accufit technology in a pair of  prescription sunglasses (that I had no use for) I jumped at the chance to volunteer Tom. It proved to be life changing.

We headed to the Eaton Center LensCrafters location to get Tom fitted for his very first legit pair of prescription sunnies. First, we met with the resident optician who went through the motions and didn't even have to dilate Tom pupils, which he very much appreciated. With the prescription in hand we headed next door to pick out the perfect frames. 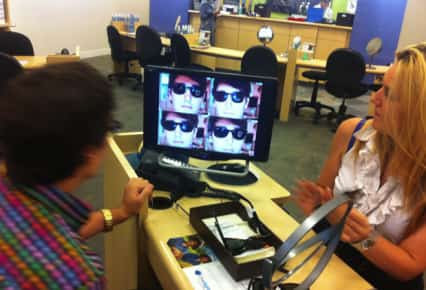 We zeroed in on the Ray-Ban section and picked out four similar styles to try out. At first Tom was doing what I call "the Double Decker" placing the sunglasses on top of his eyeglasses to see if he liked them. The manager Lisa put a stop to this at once because LensCrafters offers a unique service called Accufit. Essentially it's a digital camera mounted onto a computer monitor that can rotate virtually 360 degrees. The technology allowed us to look at multiple photos of Tom wearing the sunglasses on a computer screen. You can put your glasses on and clearly see which styles look best on your face shape. You can even change up the angle and get some profile shots in there too.

In less than an hour Tom walked out with a new pair of shades and I was relieved that I would never have to see him wear the massive sunglasses that fit over his regular glasses again. We were both winners.

It's been almost two weeks now and though he instantly loved the glasses, while we were watching the Jays game in the 500's on a hot sunny day this past Saturday he uttered the words: "these shades are life changing".

If you're interested but also concerned about the price (like Tom) now is a good time to check out LensCrafters, from now until September 12th customers get 50% off lenses including bi-focals, no lines and sunglasses made with their prescription with purchase of any frames.