Share
Innovations are at an all time high, with new beauty breakthroughs hitting the market faster than ever. But this new launch from Dyson, the British engineering firm, just might take the cake for being the biggest launch of 2016.

Known for its luxury vacuum cleaners, fans and heaters, this is the first time the brand is entering the beauty market with a hair dryer: The Dyson Supersonic. “Hair dryers can be heavy, inefficient and make a racket." says founder James Dyson. "By looking at them further we realized that they can also cause extreme heat damage to hair. I challenged Dyson engineers to really understand the science of hair and develop our version of a hair dryer, which we think solves these problems.”

It's about time this beauty tool got an overhaul. The first hand held blow dryers came out in the 20s, weighing almost 2 pounds and only used 100 watts—at that rate you're better off air drying. Now dryers are much lighter and the watts can reach upwards of 2000, but even with those vast improvements the design is still the same, they're clunky, loud and awkward to wield. 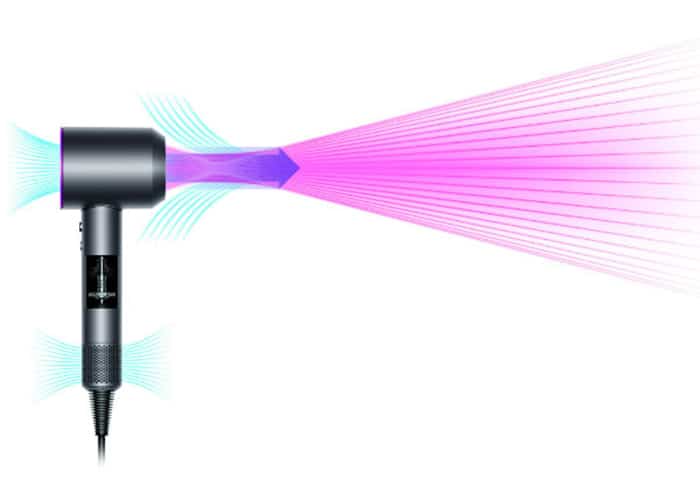 Dyson is about to blow away the competition with the Supersonic. The device took four years of intensive research and development, 100 million invested, over 600 prototypes and endured rigours testing on 1,010 miles of real human hair. What makes it so unique? Most motors are located in the head of a dyer, but this one houses the Dyson digital motor v9 motor in its handle. This is Dyson's smallest, lightest and most advanced digital motor, engineered for better balance.

Another obvious feature that differentiates this dryer is the shape. That's because the Supersonic uses Dyson's patented Air Multiplier technology, this is the same technology used in its heaters and fans—and its quiet. The volume of the air drawn into the motor is amplified three times when exiting the loop, producing a high pressure, high velocity jet of air.

The Supersonic comes with three magnetic attachments; smoothing nozzle, styling concentrator and a diffuser. Plus it's equipped with four temperature settings, including a cold shot.

Dyson Supersonic™ will launch exclusively online on DysonCanada.ca in August 2016 for $499.99 in fuchsia/iron and white/silver.