The best and brightest from the world of television and movies turned out for the 74th Golden Globe Awards—and the right carpet was on fire. Here are our top 10 looks from the event. 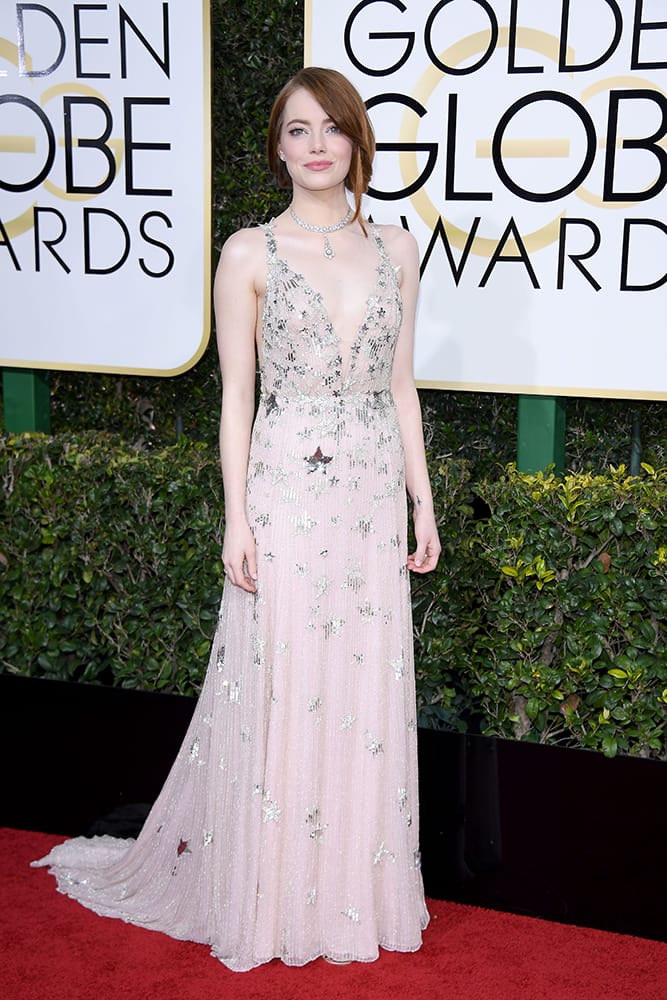 You know how they say dress for the job you want? Well, this gown is literarily star-studded. Emma Stone is no stranger to owning the red carpet, and it looks like the 2017 red carpet season is no exception. Nominated for Best Actress in a Motion Picture Musical or Comedy for her role of Mia, an aspiring actress, in La La Land. Stone looked dazzling in a backless, blush Valentino gown with beaded stars strewn across the delicate flowing frock. The elaborate dress didn’t need much help in terms of accessories, yet a statement diamond-encrusted choker from Tiffany & Co was added. A brilliant addition. 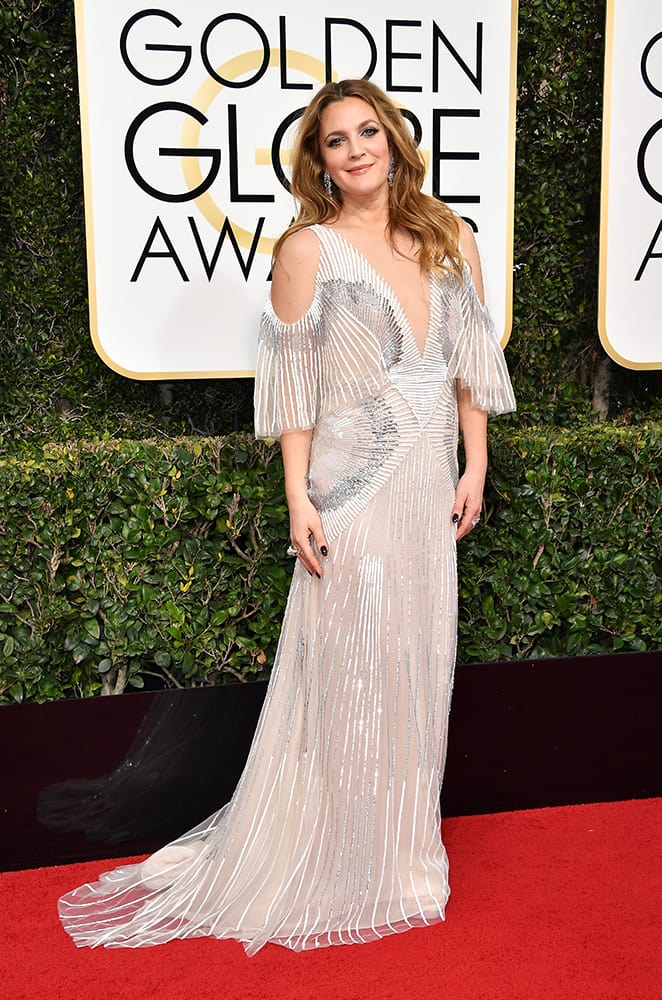 The 41-year-old actress was a brilliant vision on the red carpet in a shimmery floor-length gown while attending and presenting at the the 2017 Golden Globe Awards. The romantic gown with delicate art deco detailing is Monique Lhuillier while her sparkling jewellery was Harry Winston. What we loved about Barrymore’s look was the overall styling, she opted for flowing beachy waves rather than something more predictable and polish, well played! 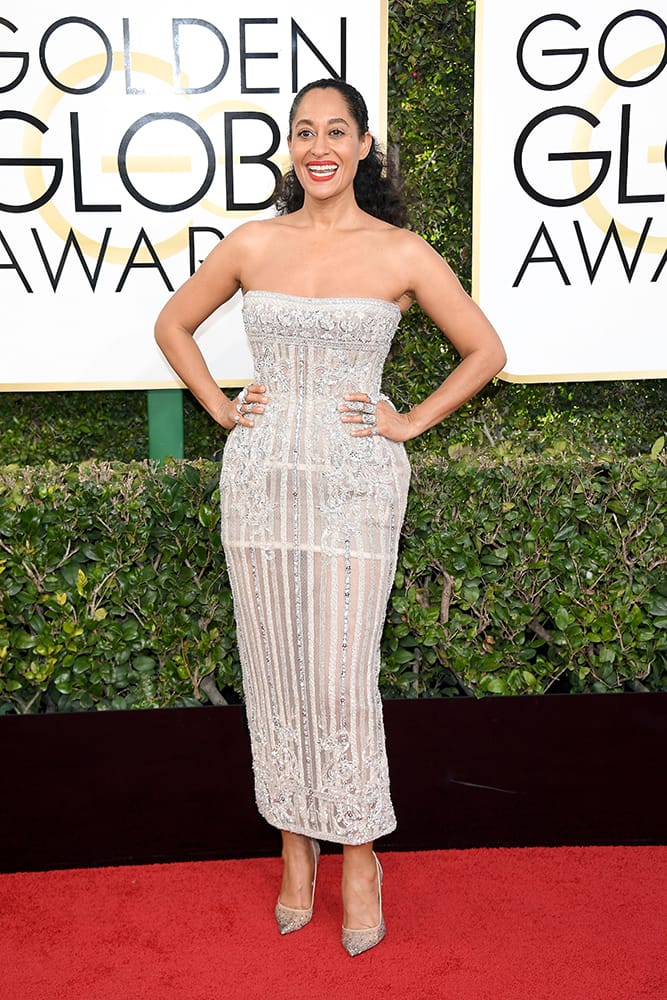 Ellis Ross won her first Golden Globe at the age of 44 for Best Actress in a TV Musical/Comedy for her role in Blackish and she took to the stage welling up at the accomplishment, while giving viewers a beautiful acceptance speech. The star also won on the red carpet, wearing a silver Zuhair Murad dress from the designer's spring 2016 couture collection and a pair of matching sparkly pumps by Christian Louboutin. One of our favourite parts of her look was the stacked diamond rings… on each finger! The unexpected statement jewellery was edgy, daring and oh-so-glamorous—the risk totally paid off. 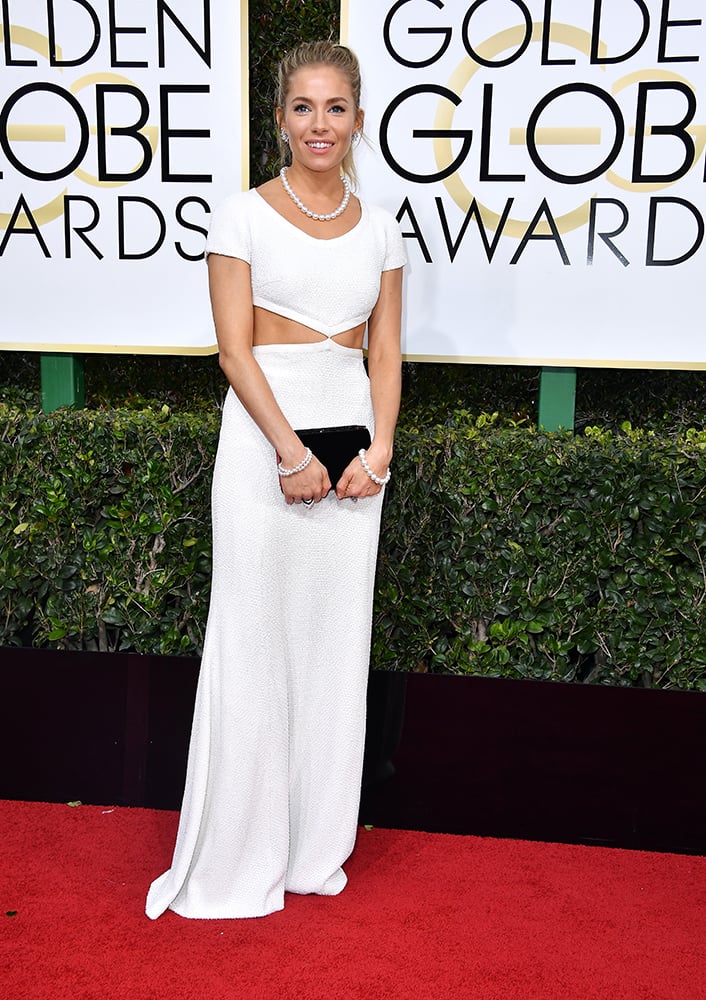 Sienna Miller proves that sometimes simple is best. In a sleek white Michael Kors gown with cut-out details, Miller embraced lady-like elegance with a twist. She wore the dress with a simple string of pearls and a low-maintenance ponytail—and she looked radiant. 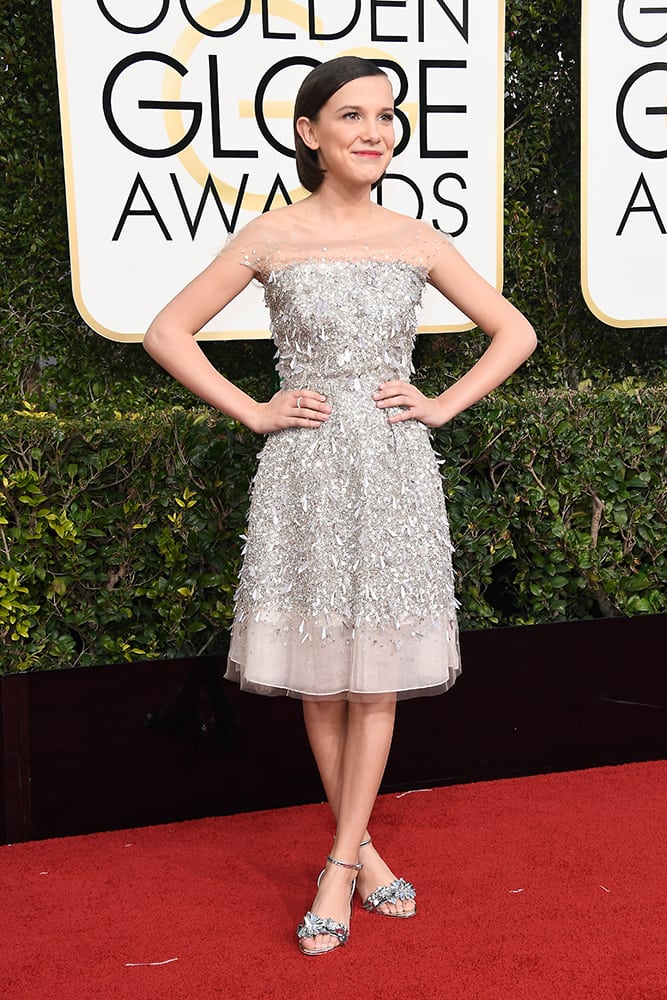 Millie Bobby Brown is only twelve—though you’d never guess it from her poise and class on the red carpet. We are glad the Stranger Things star chose a dress well-suited to her age though. This sparkly Jenny Packham frock is fun and vibrant. Perfect for a star on the rise. 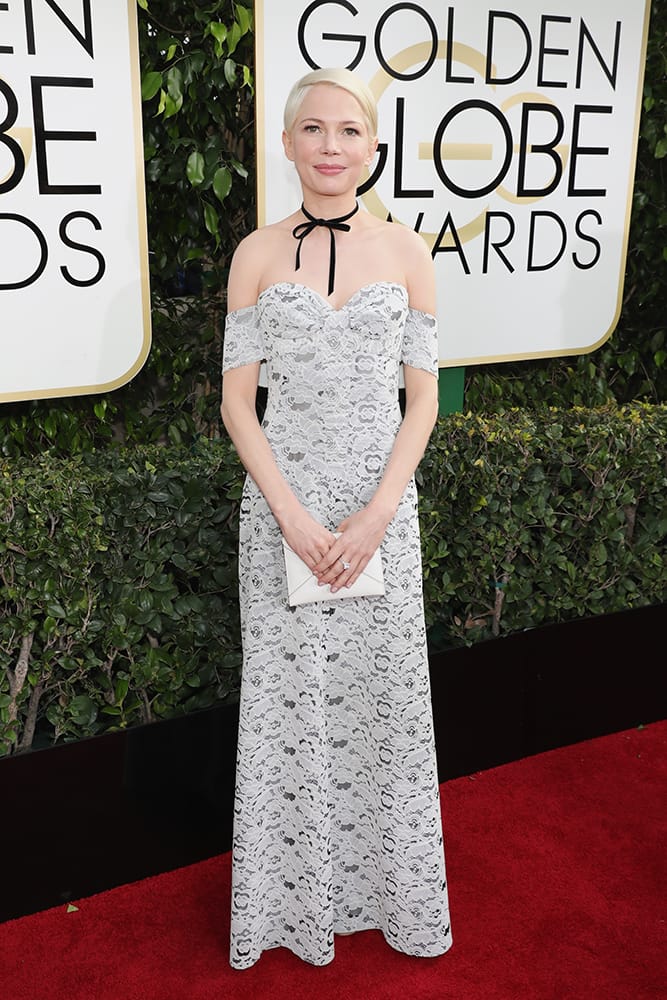 Williams, who is nominated for Best Performance by an Actress in a Supporting Role for her role in Manchester by the Sea. This is her fourth Golden Globe nomination and if Williams wins tonight, it will be her second Golden Globe win. She first took home a Globe at the 2011 awards show for playing Marilyn Monroe in My Week With Marilyn. Williams looked like a vision in a fitted white strapless Louis Vuitton column gown and a chic petite black bow choker. We also loved her fresh platinum hair and delicate and fresh makeup. 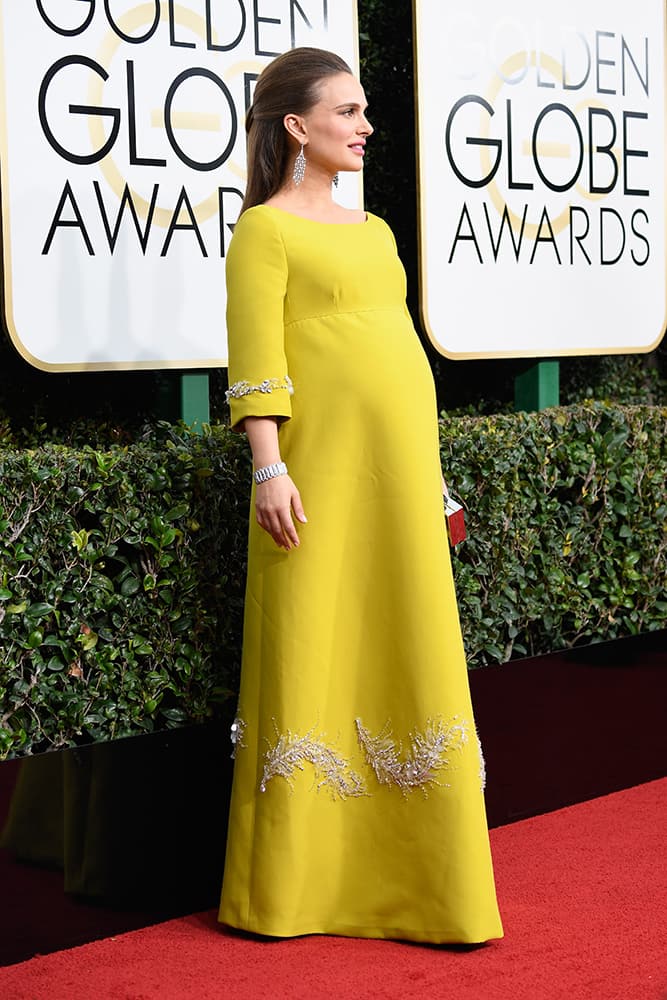 Tonight, at the 2017 Golden Globe Awards, a pregnant Natalie Portman arrived with a coveted Best Actress nomination for her performance of Jacqueline Kennedy Onassis in Jackie. For the red carpet occasion, Portman channeled Kennedy Onassis with a modern take on the former first lady’s iconic bouffant, classic makeup and wore a dress similar to a yellow frock that she once wore to the Metropolitan Opera House in 1975. Portman’s sunny gown was from Prada, while she grounded the look with Jimmy Choo shoes and was dripping in Tiffany & Co. jewellery. 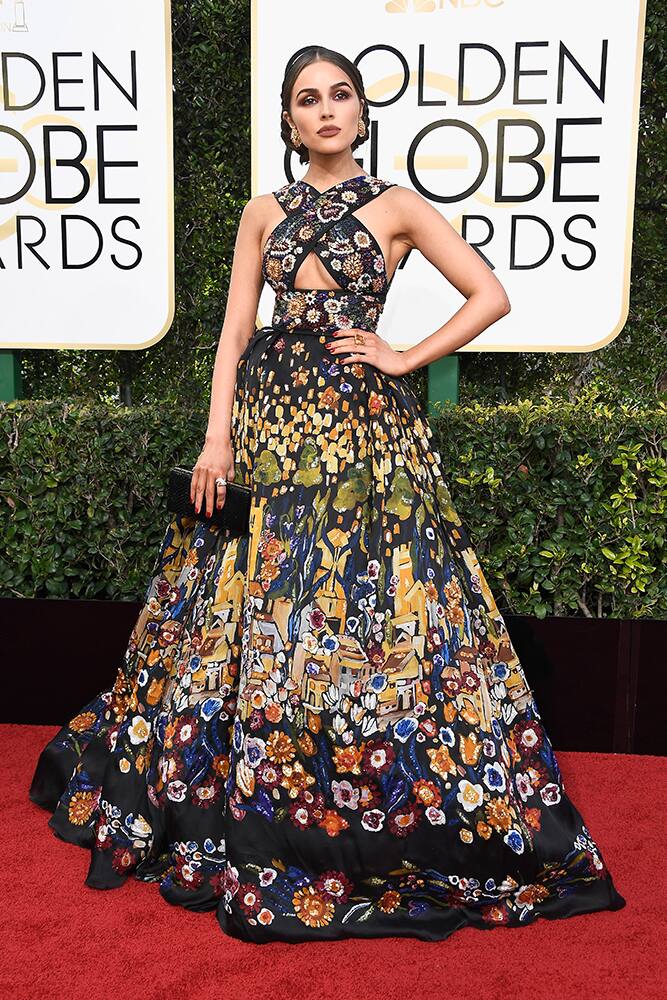 One of the more dramatic looks on the red carpet, Olivia Culpo embraces intricate embroidery and a bit of the dark side with this Zuhair Murad Couture pick. We love the full skirt and interesting neckline. She definitely stood out—in the best way. 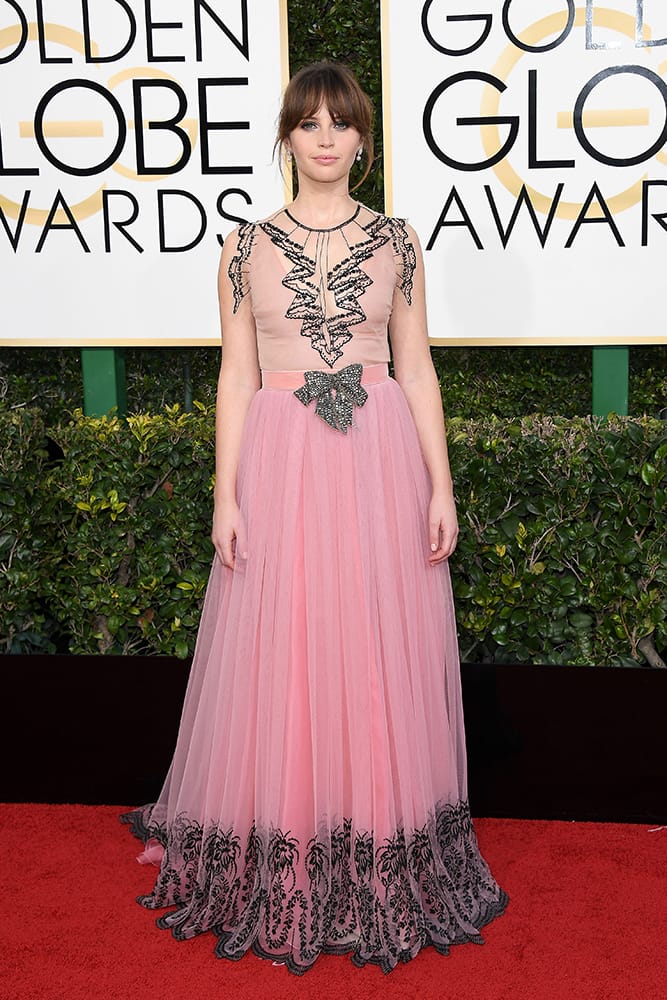 Felicity Jones' big year (starring in a Star Wars movie will do that) has led this actor to be in the spotlight a lot more—and we like what we see. Her pick for the Golden Globes was a stunning pink Gucci dress. She wisely pulled back her hair and kept her makeup simple—this dress is the star of this look, but it doesn't overwhelm Jones. Instead she looks elegant and at ease—no easy feat when you're wearing a bubblegum pink gown. 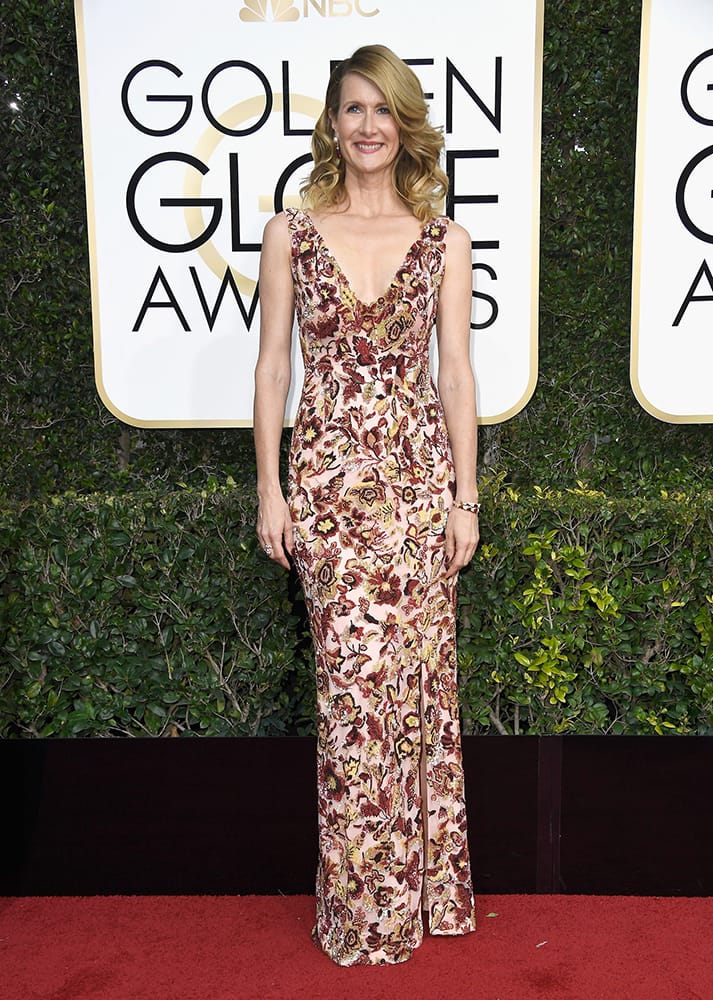 Laura Dern looked fantastic in this floral, floor-length number by Burberry as she presented at the Golden Globes. The simple column gown with plunging neckline was made special by the beautiful print and Dern's hair and subtle jewellery let this dress shine.