"I truly feel like a new woman—not just a mom, but a radiant and powerful working mother."

Last year was a whirlwind for Jessica Rockwood. She gave birth to a daughter (topping up her brood to three) and, while on maternity leave, was asked to return to work early to take on a promotion as director of hybrid platform development and client success data at IBM. In this new role, she needs a more polished image. "I'm daunted by the idea of getting myself into executive mode," says Jessica. "I'm not sure how to achieve business attire that doesn't make me look old." Before she returned to work, we gave Jessica a fresh look—now, she's ready to command a team! 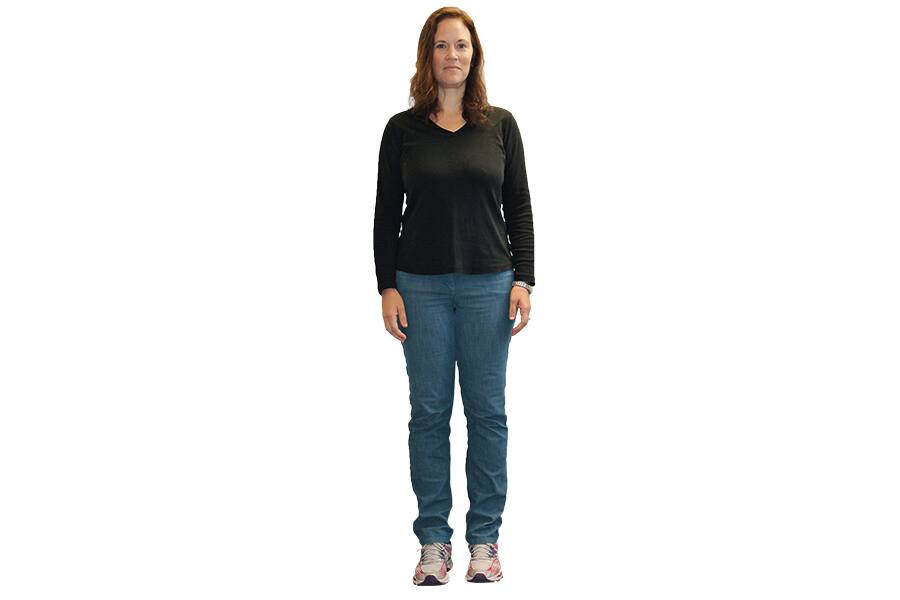 "My hair gets the most attention when my five-year-old, Paige, decides to play the role of stylist," jokes Jessica. She walked into the salon with good base colour, but some patches were washed out and overlightened. "Because Jessica was starting a new job, I wanted to give her a look with authority," says Roger Medina, a hair ambassador for Garnier. That meant darkening her shade and making her hair lusher from root to tip. "I've noticed that when you have a rich colour and it's more vibrant and fresh, people take you more seriously," he says. He also gave Jessica a softer fringe and added layers. For the photo shoot, Medina used a one-inch-barrel curling iron to refine her hair's natural shape.

"When I'm strapped for time, I'll use some moisturizer and eyeliner," says Jessica. But she confesses she's often too pressed to do anything at all. Plutino Group makeup artist Jodi Urichuk is also a busy mom and suggests Jessica invest in a mini makeup bag that she can stash in her purse. "It should hold about five items; anything more would be setting her makeup goals too high," she says. She recommends compiling a multiple stick (for lips, cheeks and eyes); tinted moisturizer; concealer or brightener; tinted eyebrow mascara; and curling mascara. But for our photo shoot, we went for some drama. After applying a tinted moisturizer, Urichuk focused on Jessica's eyes, swiping her lids with a creamy eyeshadow stick. "Jessica has heavier lids, so I added depth at the outer corner and went subtle on the inside with a bit of light-reflecting shadow," she says. Urichuk filled in her eyebrows, used curling mascara and finished with a low-maintenance neutral toned lip colour.

Post-pregnancy, Jessica's skin was slightly discoloured and dull, which meant her main goal was to brighten. "Jessica still had a bit of melasma—sometimes called the mask of pregnancy—on her cheeks," says Alexandra Weisseneder, senior esthetician at Miraj Hammam Spa by Caudalie Paris. Along with recommending brightening ingredients such as vitamin C and Viniferine (an active ingredient in grapevine sap that helps diminish dark spots), Weisseneder also suggests regular exfoliation with her cleanser a few times a week to reap skin-renewal benefits while also saving a bit of time. 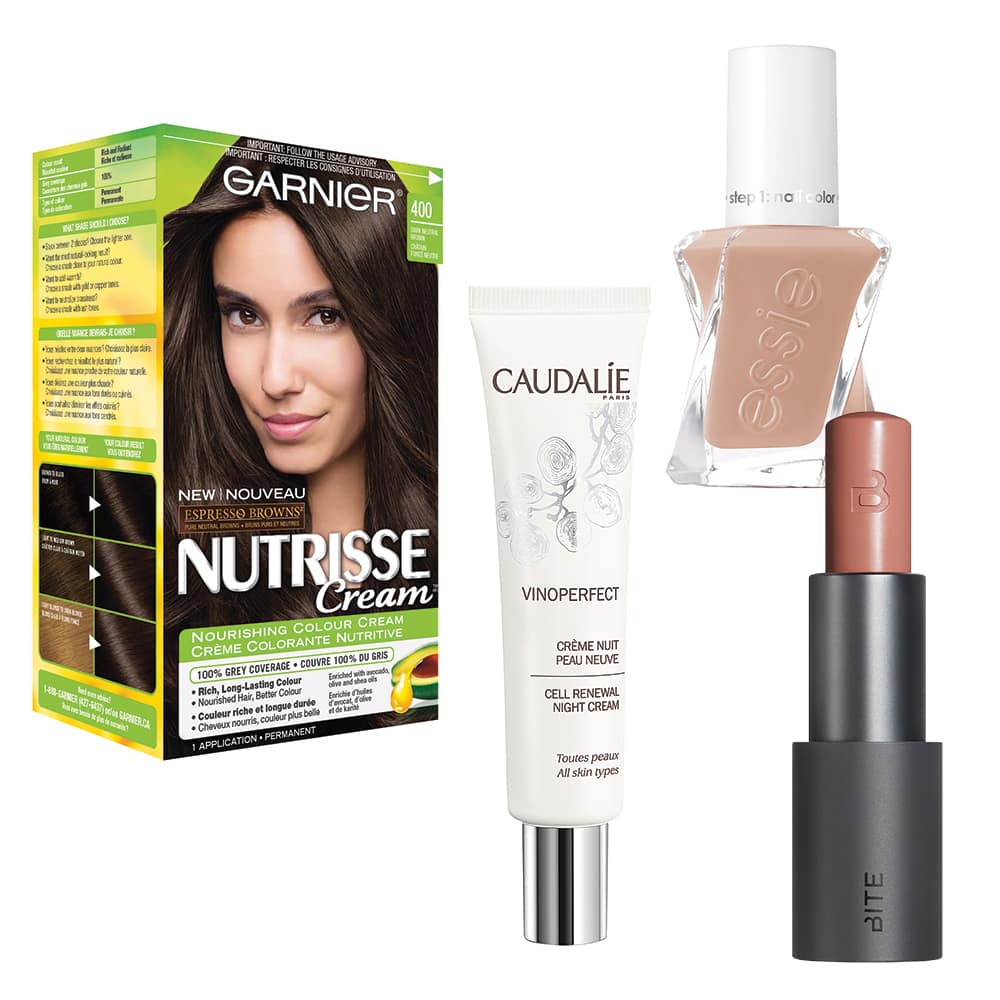 "I wanted to do something very chic: a nude that's a little deepr than her natural skin tone, which is very '70s," says Rita Remark, Essie Canada lead nail artist and global educator. "For Jessica, it will show that her nails are taken care of, but they're not the whole story."

"My usual look can only be described as mom style," says Jessica. For her, this means comfy shirts, yoga pants and runners. But Jessica's most pressing fashion dilemma isn't her personal esthetic—it's creating a fresh workplace image to match her new executive-level gig. Melissa Evans-Lee, the marketing director for Bayview Village Shopping Centre in Toronto, set our to find corporate-appropriate pieces that would work hard for Jessica. "She's young, so I wanted a look that was youthful and didn't feel dated or boring," says Evans-Lee. She adivsed Jessica to avoid basic black and instead mix other neutral options (cream, camel, grey) with a vivid pop of colour like red. Evans-Lee chose a modern-cut suit with a tuxedo detail on the jacket and a wide pant with a cropped hemline. A sleek pair of heels and a structured handbag round out the ensemble. 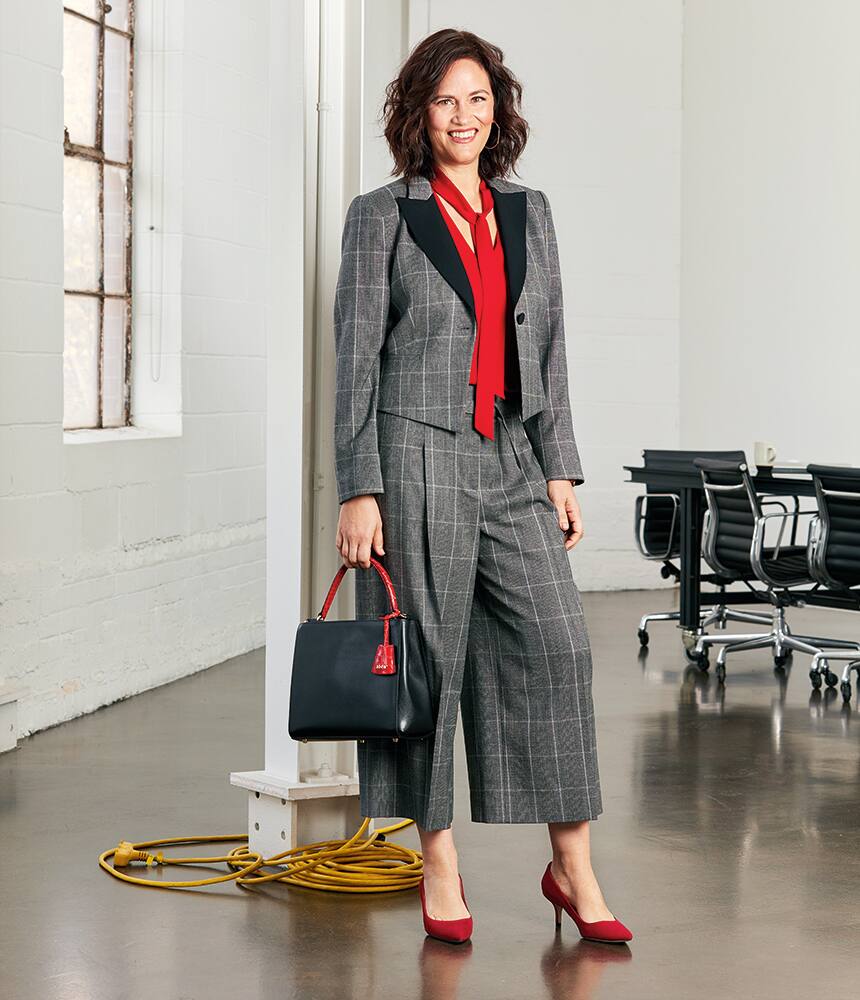 "Being on maternity leave, I got so used to putting myself last that I lost a little of myself along the way," says Jessica. "It's amazing just how much of an impact this experience has had on both my self-confidence and my outlook. I feel like there's a re-energizing of my whole self starting from the outside in."

Post maternity leave, Jessica heads back to work with a new look