These days, being a bridesmaid has never been better. Brides actually want their bridal party to look as good as they do. But not so long ago, that meant spending the big bucks on an unflattering dress that would be relinquished to the back of the closet after one wear, never to see the light of day again. Read on to find out how bridesmaids got from fashion crime to style star.

Birth of the bridesmaid
Once upon a time, the bridesmaids’ duties went beyond throwing bachelorette parties and bridal showers: instead, they were busy protecting the bride from evil spirits. Roman Law once required witnesses to come to weddings to confuse these spirits about who was the bride and who was the groom. “Bridesmaids” dressed similarly to the bride, which threw off bad luck.

Those beliefs held fast until the late 19th Century, when English bridesmaids looked almost identical to the bride, clad in white to ward off curses from ill wishers.

20th Century bridesmaids
Bridesmaid attire went through a lot of changes in the 20th Century. During the Edwardian Era (1901-1910), maids wore dresses that were similar to the bridal gown: long sleeves, high necklines, full skirts and plumed hats.

By the ’30s and ’40s, those dramatic looks gave way to simpler dresses during the height of the Second World War for one reason: to save money. Less fabric meant lower costs which demanded simpler designs.

When the ’50s and ’60s rolled around, bridesmaids experimented with many different styles (this was the Mad Men era, after all) including hoop skirts, chic cocktail looks and a variety ofcolours. It’s safe to say for the first half of the 20th Century, bridesmaid dresses reflected the style of the time and were similar to what the bride herself would wear.

The ’70s, ’80s and ’90s was the dark period for bridesmaids thanks to “ugly” bridesmaid dress: identical in colour and shape, and usually involving unflattering fabrics and styles. These dresses didn’t come near the gorgeousness of the wedding gown, which was probably done on purpose, says Kleinfeld Hudson’s Bay’s Jessica Mulroney. “I think it was always such a big fear that the bride should never be upstaged by her bridesmaids,” says Mulroney, “so everything had to be very plain and in a million different colours.”

Modern Bridesmaids
Fortunately, the 21st Century has ushered in big (and beautiful) changes to bridesmaid dresses. According to Mulroney, part of the shift from the matchy-matchy bridesmaid dress to the chic, sexy looks we see now has to do with brides themselves.

“I think brides now realize that by putting their bridesmaids in dresses that are unattractive, it actually affects the look of their pictures and nobody wants that,” she says. The “one dress fits all” idea is becoming old-fashioned, as more brides realize that one style doesn’t necessarily look good on all women. Now, bridesmaids might wear daring necklines, backless gowns, vibrant colours and patterns, plenty of sparkle and yes, even white.

What to do if you hate the dress
Even with the range of choice, your taste might not be the same as the bride. If you’re uncomfortable with a dress the bride has chosen, speak up before it’s too late. “Talk to the bride one-on-one about your concerns or your insecurities about wearing a certain kind of dress,” says Mulroney. “Make sure that this is communicated right away in a polite, not bossy tone.” If the bride is really committed to a certain dress you don’t like, Mulroney suggests wearing an accessory that would make you feel more comfortable and confident.

Sequins
Made in gold, silver, bronze and rose gold, sequin bridesmaid dresses are a huge trend  and a great alternative to solid colours. Perfect for the warm weather months, these shimmery gowns look gorgeous in photos and can be worn with a variety of styles.

One-shouldered
Forget strapless! This asymmetrical detail is where it’s at. Not only are one-shoulder dresses incredibly elegant and unique, but they are great for women who need a little extra support.

White, blush and cream
Bridesmaid dresses have come full circle, with brides encouraging their ’maids to look like they’re getting hitched too. Mulroney says that gowns in blush tones, creams and whites are huge for spring and summer and there’s no doubt ‘maids in white make for a gorgeous bridal party. 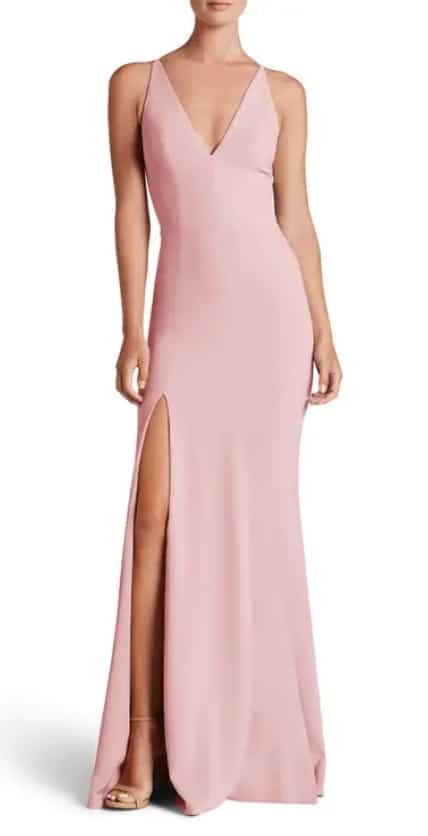 The evolution of the bridesmaid dress