Writer Ashley Kowalewski-Pizzi shared her emotional experience of miscarriage—one many women can probably relate to.

I’ve always known that I want kids, but if I’m being honest, it’s never been my top priority. I spent the majority of my twenties putting my career, friends, travel and independence first, working towards building a life that I was proud to share with my future children. I also had to combat some of my own fears and insecurities about having a child. I was the first of my friends to get married (which already seemed very adult) and I often feared that no one would want to hang out with me once I had a baby. (I’ll just say that episode of Sex and the City where Samantha shoves Miranda and her newborn in a cab really stuck with me.) But this year I turned thirty and I felt as though I was finally as ready as I’d ever be. I have a good job, a stronger sense of financial security and I realized that the friends that want to be around me will, and that having a baby doesn’t mean I can’t travel or have a life and a career (though, if I’m being honest, giving birth still terrifies me). My ever-supportive husband and I made the decision that we’d start trying (or rather, stop actively preventing) on a big trip to Italy that we’d planned for my thirtieth—the last big trip before we dove into parenthood.

Sure enough, about two months later, we were pregnant. Those two pink lines showed up on each of the three at-home tests and my doctor confirmed that we were about four weeks along. I spent the better part of my adult life doing everything I could to avoid getting pregnant and almost as soon as we pulled the goalie, it happened.

On the outside, both of us were playing it cool. With the Canada Day long weekend looming, we decided to tell the A-listers who we would be celebrating the long weekend with—a.k.a. our closest family and friends who would be suspicious if I was celebrating at the cottage sans cocktail. Also, I’m a terrible liar. With the “don’t tell anyone until after three months” rule society touts in mind, we prefaced every conversation with an “it’s still really early” disclosure, if only to convince ourselves not to get our hopes up.

On Saturday, June 30 we spent the day at the beach with my mom. I’d started spotting a bit in the early afternoon—something the doctor said would be normal and was a sign the embryo was implanting itself. But as the day progressed, it became more than spotting and I knew something was wrong. My husband and I went to the nearest emergency room (an interesting place to be on a long weekend in cottage country, let me tell you). After waiting for a few hours, the ER doctor called us into a room and said, based on the symptoms that I had described to no less than three nurses, we’d likely lost the pregnancy. We could do bloodwork if we wanted, but that would mean waiting around a few more hours for the results, only to likely end up with the same prognosis. The doctor was sympathetic enough, but the whole experience still felt very formal and stiff. I could almost hear the doctor’s internal monologue: “Okay, you can go home now, we’ve got someone with a fishing lure in his leg that we need to attend to.” Given the status of the ER, the loss of a very early pregnancy wasn’t really at the top of the list. 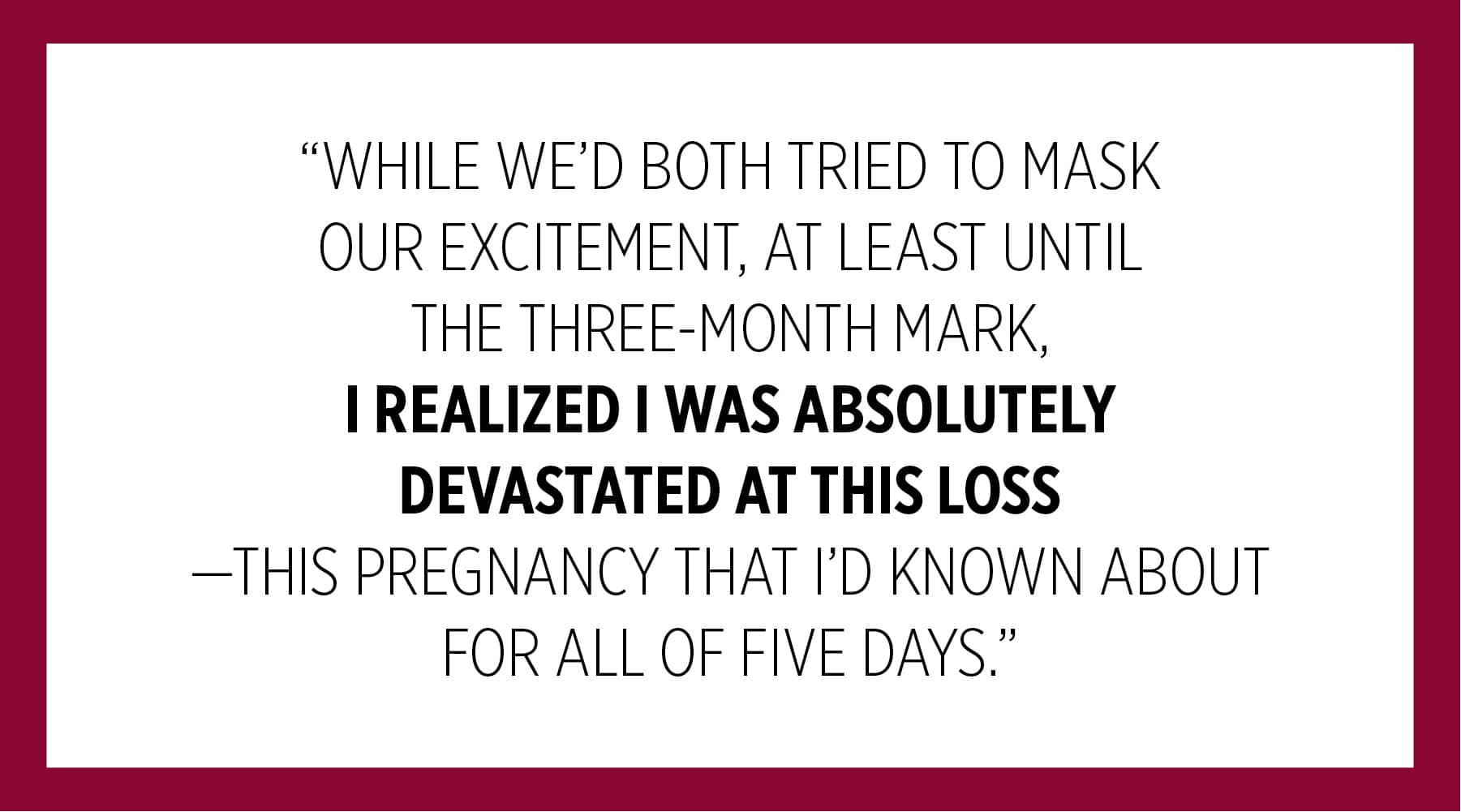 What came next was entirely unexpected, and not just the emotional trip to the drugstore for supplies for the period I hadn’t planned that weekend. While we’d both tried to mask our excitement, at least until the three-month mark, I realized I was absolutely devastated at this loss—this pregnancy that I’d known about for all of five days. I felt silly doing the “sorry, false alarm” calls and texts (this is why everyone tells you to keep it to yourself for a bit). I felt drained from the experience and all the tears, but most of all, heading back to the cottage, I felt sad and scared that I’d let my partner down in some way, even though I know that he would never be capable of blaming me for something so beyond my (or our) control.

My doctor told me that most women who experience a loss this early don’t even realize it and just think that it’s a heavy period. Of course, I cursed my overly efficient body for never having a late period to mistake this for, another way it had felt like my body had let me down. But, pretty soon the questions of “what could I have done differently?” began to surface. I started picking at little things, turning them over in my mind, wondering if I’d found the reason why. The wine I’d consumed the weekend before I found out, the stressful week I’d had, not going to the gym—so on went the list. The kicker came when I found out that a colleague is pregnant and is due right around the time I should’ve been due. I’m an emotional person on the best of days but add in post-miscarriage hormones and you have the emotional wreck that is Ashley (hi, me).

All the negative emotions I had been feeling in the wake of my miscarriage were accompanied by a hefty dose of guilt for feeling that way at all. (Emotions are so fun.) I tried to convince myself that this wasn’t that bad, that I’d endured worse. How can you fall so hard for something you barely had? Plus, others have had it so much worse, fighting against infertility for years. But lurking underneath all of these rationalizations is the fear that this is only the first in a long line of many. Statistically, I know that many women go on to conceive healthy babies after a miscarriage, but the fact that, in Ontario where I live, many doctors only look into the cause of miscarriages after three consecutive pregnancy losses, my mind immediately jumps ahead and expects the worst-case scenario. The rational side of me wants to hang on to hope, but it’s hard when you just feel so bad. But, not stifling the feelings (and even writing this piece) has been cathartic. (Though, I’ve always felt that talking about grief helps, even though it tends to make some people uncomfortable; something I learned when my dad passed away almost a decade ago.)

When my husband and I started telling some of my friends and extended family “what happened” (sometimes we have a hard time saying the actual word—miscarriage—without tearing up so it’s been replaced with “what happened”), I realized that I’m not actually alone—just no one talks about it publically, ever. Some people shared their miscarriage stories with me very matter-of-factly, some with hushed tones, some with a shrug. The point wasn’t really how they’ve come to view their own experience, but that so many had the experience at all—and I didn’t really know about it. I know that this is a very personal thing to go through, but I feel as though the conversation is often dropped for reasons that have nothing to do with it being personal. Reasons that I’ve battled with myself (namely shame, guilt, fear and intense sadness), and that I’ve come to realize are normal. It just didn’t feel right to keep this to myself when I know so many others are stifling the rollercoaster of feelings that this experience can bring.

I’ve been given the official all-clear by my doctor to try again if I’m ready (I am). And I can already feel myself masking my emotions, trying to play it cool just in case I find myself in a similar situation again. But I hope that by sharing my own experience, others will know that they’re not alone and that it’s okay—even encouraged—to talk about it if they feel comfortable.

This was my first, and hopefully last, miscarriage. Whatever happens will happen, but now, I know that I won’t be alone in it. This incredibly personal, emotional experience is something that is experienced by many, and the more we share our experiences, the better we are hopefully able to grapple with all the emotions that come after. For me, the good news is I’ve found my own silver lining: I no longer doubt my desire to have a baby, and I’m ready.

19 simple things you can do to practice self-care

Have you been putting yourself last lately? Here are 19 super-easy things you can do to beat stress, reduce anxiety and boost your mood.