Breast cancer vlogger Sarah DiMuro explores how she’s coped throughout her cancer journey—from waiting on results to receiving hormone therapy and everything in between.

Actress and writer Sarah DiMuro, 41, is a vibrant, funny new mom. She’s also a breast cancer survivor who was diagnosed with invasive ductal carcinoma just nine-and-a-half months after giving birth to her son. Since March 2018, Sarah has undergone a double mastectomy and started receiving hormone injections that keep her in a state of menopause to prevent the cancer from returning. And because it’s not safe for her to carry another child due to the estrogen surge caused by pregnancy, she and her husband are exploring surrogacy using the embryos that they froze several years ago.

If you’re thinking that’s a lot for anyone to handle, especially someone so young, you’re right.

That’s why Sarah partnered with ReThink Breast Cancer, an organization that works to educate the public and support young women dealing with breast cancer, to create and promote her vlog, First Baby, then Breast Cancer. In the ongoing video series, Sarah uses humour to talk about the highs and lows of her journey. Her unvarnished approach feels incredibly real and makes cancer seem a lot less scary—even when she talks about chemotherapy and the side effects of early menopause. Within her videos, Sarah also discusses coping and how she practices self-care. 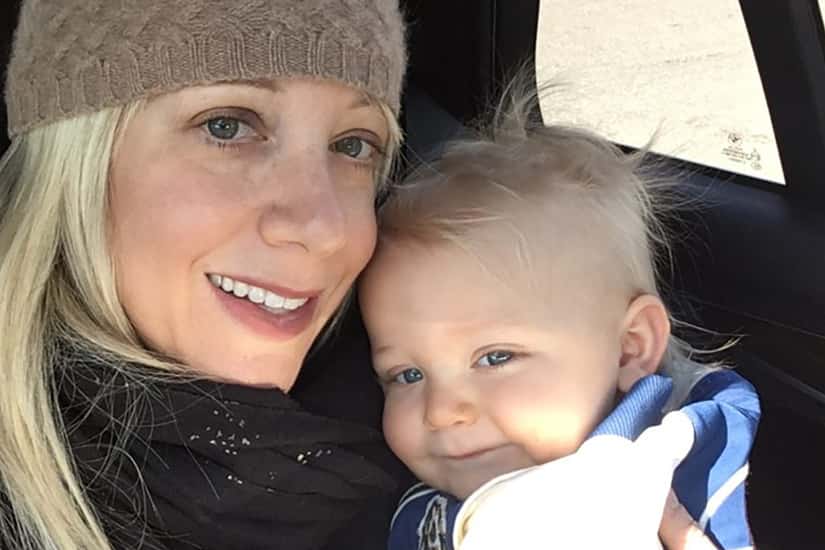 Here are a few of the tips that she gave us to help anyone waiting on results or going through treatment.

1. If you can shorten your wait time, do it.
One of the worst parts of being diagnosed with cancer is the wait before the diagnosis. For Sarah, it was a two-week process where she received a mammogram and ultrasound, then waited a week for a biopsy and another week to receive definitive results. “It was a nightmare,” she says. “What I went through was pure hell.” If she could do it over, she would ask her doctor to send her to the Gattuso Rapid Diagnostic Centre at Princess Margaret Cancer Centre in Toronto, where you find out the results of your tests within 24 hours. If you have a similar program in your city, Sarah recommends taking advantage of it and eliminating the stress of waiting for both you and your family.

2. Don’t Google.
When you’re worried about a diagnosis, it’s easy to start googling your symptoms and reading online forums. But Sarah says it won’t help. “I googled so much in the first two weeks,” she says. “It got to the point where I was googling about 18 hours a day. I started to get headaches. Please, whatever it is, just stay off WebMD. For me, it made everything worse.”

3. Ask questions and get second opinions.
Sarah has learned that doctors don’t tend to volunteer information, so it’s best to go to each appointment with a list of questions and ask each and every one of them. She also suggests getting a second opinion if you’re unsure about the diagnosis or treatment path you wish to take. “I’m all about getting a second opinion if you’re on the fence about something,” she says. “For me it was, ‘Do I do chemo or not?’ I didn’t end up doing it. But don’t be afraid to get a second opinion because it will make you feel better, especially if what the second person says is the same as the first. That’s huge.”

Watch Sarah’s video about getting a second opinion on chemotherapy.

4. Find the diet and exercise routine that works for you.
For Sarah, clean eating and working out have long been an important part of her ability to cope with life’s curveballs. “I was diagnosed with clinical depression in my early twenties, so I’m very aware that I can go to that dark place,” she says. To make sure that she feels strong physically and mentally, Sarah keeps her diet clean and works out every day—and her routine became even more of a priority after she was diagnosed with breast cancer and knew her mental health would take a hit. “It makes me feel good. It makes me feel powerful,” she says. She also uses her treadmill as an escape when she feels overwhelmed with anxiety or fear.

5. Indulge a little, too.
Even though she’s careful about her diet and has eliminated a lot of treats, Sarah will never quit her one great love, Fresca. “I swear to god, I will never give it up,” she says. “I love Fresca. I have little cans of it. I treat myself.”

6. Cultivate a support system.
Everyone will not understand what you’re going through or know what to say to you, but try to find the people that do. For Sarah, it’s her parents, husband, mother-in-law and sister. The support of her sister has even influenced her decision to try to have a second child via surrogate. “I want [a second child] so bad. I want one more now than I ever did before,” she says. “Especially because my sister was so amazing through all of this. I don’t know what I would have done without her. I look at my son and I think I’ve got to cultivate that relationship for him.”

Wondering what not to say to someone going through breast cancer? Watch Sarah’s video about all of the things people told her when they found out she was starting hormone therapy.

7. Share your experience.
Though part of the reason Sarah creates her videos is to help other people, she also does it for herself because talking through her thoughts and feelings genuinely makes her feel better. “It’s all so overwhelming,” she says. “Having those videos and having a moment where I can check in is so important. It makes me feel like I can get it out. Even if two people watch, who cares. For me, it’s just about doing them.”

If you’re dealing with cancer, you are not alone. Check out First Baby, then Breast Cancer for an honest, emotional look at Sarah’s experience that will leave you laughing.

Despite devastating cancer diagnoses in the prime of their lives, three brave women climbed their way back to health and are now making the most of their time as breast cancer survivors.