The 2018 Winter Olympics have officially begun with a powerful opening ceremony. Check out the top highlights for a taste of what we can expect from the games this year. 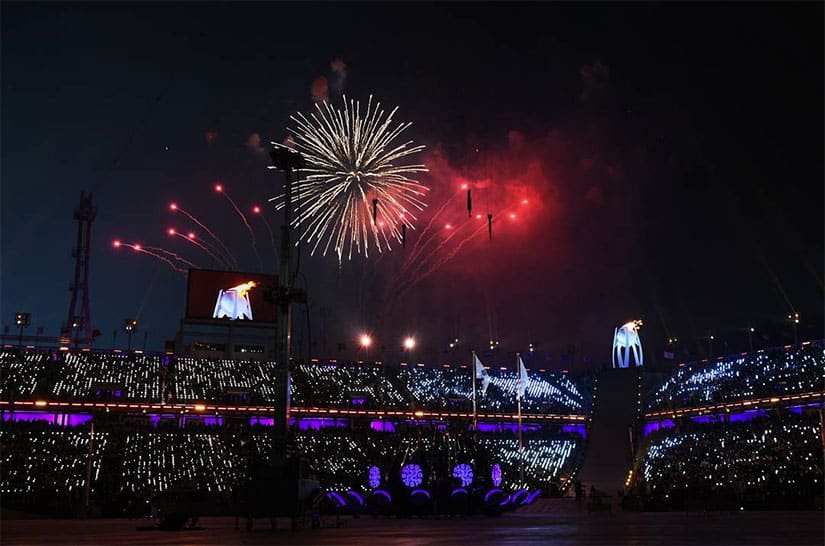 While competitions have already begun, the 2018 Winter Olympic Games were officially opened on February 9, 2018 and is already making history – from inspiring gestures towards gender equality to the ongoing saga of the Russian doping scandal. But the one message embraced throughout the entire ceremony was that of peace and harmony. 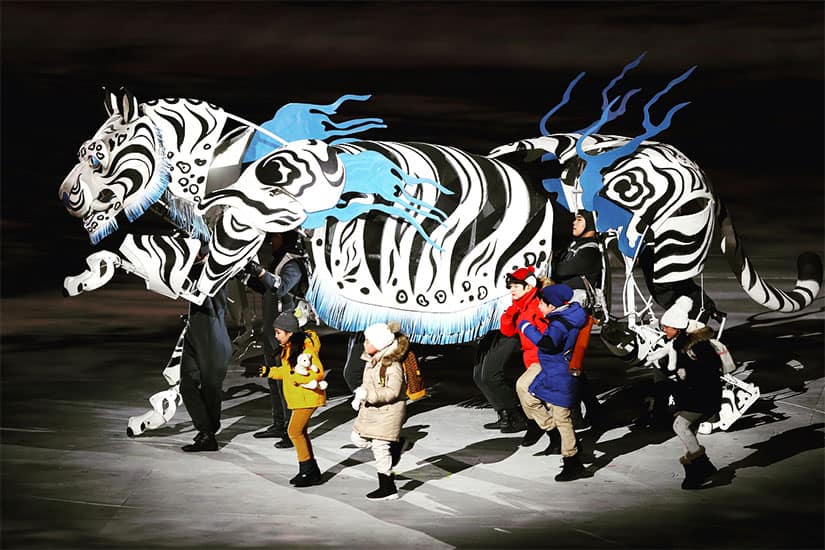 Held at the Pyeongchang Olympic Stadium in South Korea, the opening ceremony, titled “Peace in Motion”, told a story of Korea’s heritage from past to future. Five children from the Gangwon Province represented not only the Olympic rings, but also the five elements that make up the universe – fire, water, wood, metal and earth. In a mesmerizing display of lights, video and dance, the children took a journey that taught them how to live in harmony and become one. This beautiful winter fairytale culminated in a performance that included 154 performers, 48 dancers, 106 puppeteers, and 85 animals and plants. 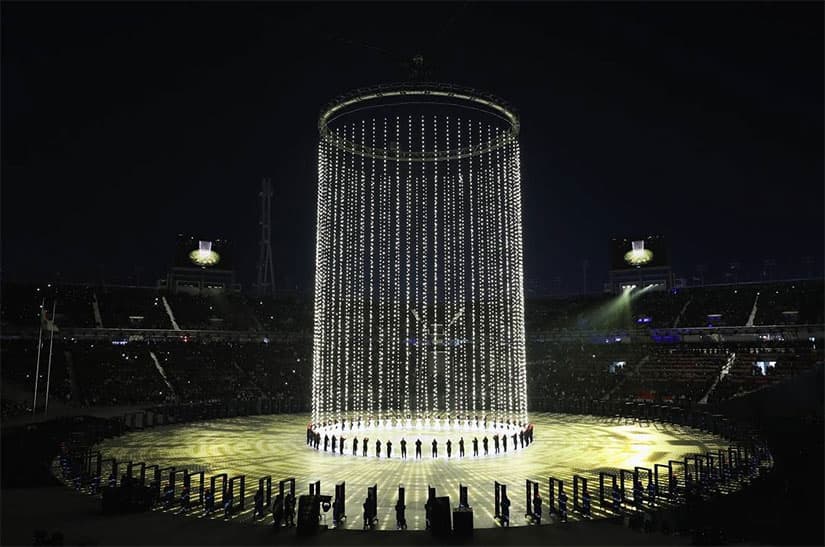 Travelling along the river of time on a raft, the five children arrived at an imaginary gate that led to a world of technology and connectivity. In the end, through this gate, was a world that Korea desired to be — a place where people are considerate of each other and where people and technology co-exist harmoniously. 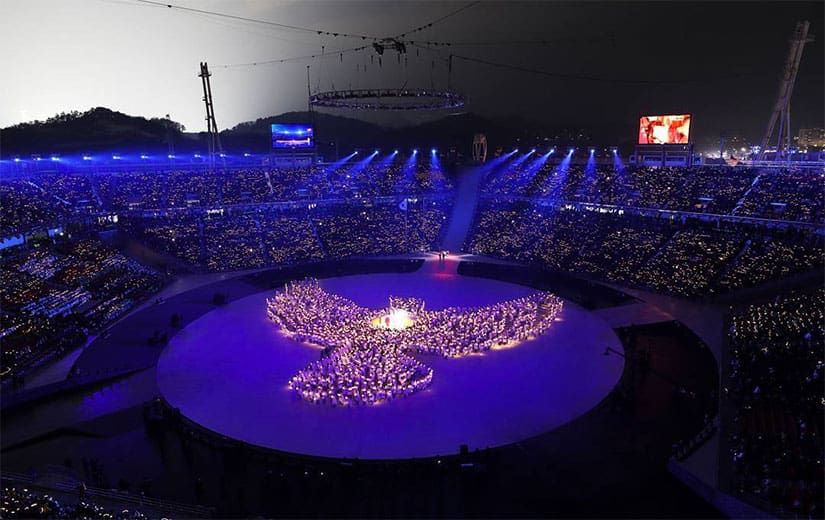 Later, the children reappeared to demonstrate peace in motion to the heartfelt cover of John Lennon’s “Imagine”. Performed by Korean musical stars Ha Hyun-Woo, Ahn Ji Young, Jeon In Kwon, and Lee Eun Mi, the song was also accompanied by musicians across the world as a show of international peace and unity. 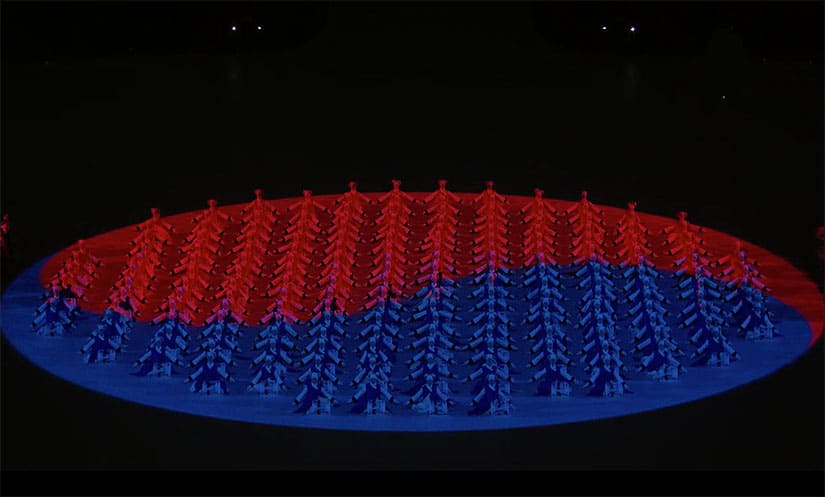 Nearly 400 drummers and dancers captivated viewers in both sound and sight with a powerful performance of synchronized movements and rhythmic energy. Playing the janngu, the traditional hourglass-shaped Korean drum, the choreography represented the four trigrams of the nation’s flag – earth, heaven, fire and water. The performance came to a stunning finale with a sudden colour change from white to blue and red, illustrating the balance of yin and yang, which is at the core of the Korean culture.


THE NATIONAL ANTHEM
While it may have been the Korean national anthem sung, the singers represented a much more global message. Performed by the Rainbow Children’s Choir, a multicultural youth choir consisting of members from different nationalities, they symbolized peaceful diversity as part of the ceremony’s theme.


THE PARADE OF NATIONS 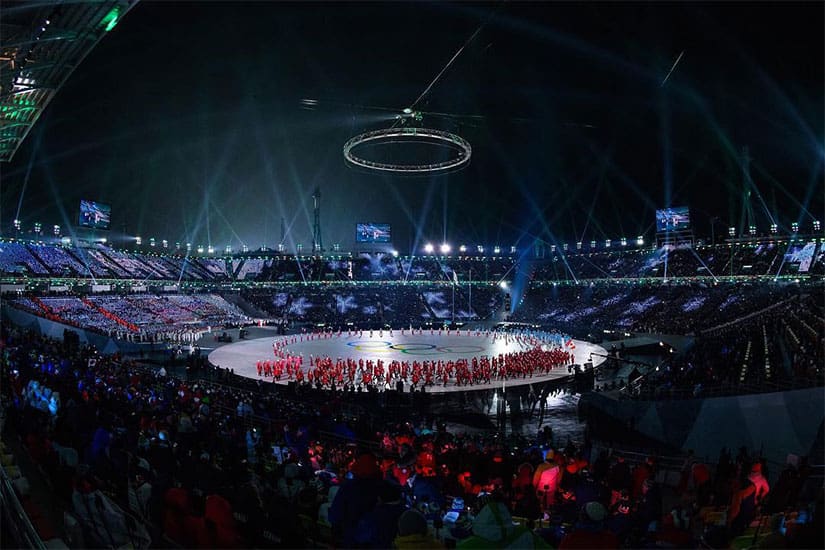 With the sub-zero temperatures in the open-air stadium, plus competitions already ongoing, there was a question of how many athletes would attend the ceremony. However, with 92 countries competing in this year’s Winter Games, there was certainly no shortage of athletes, pride or dancing during the parade. 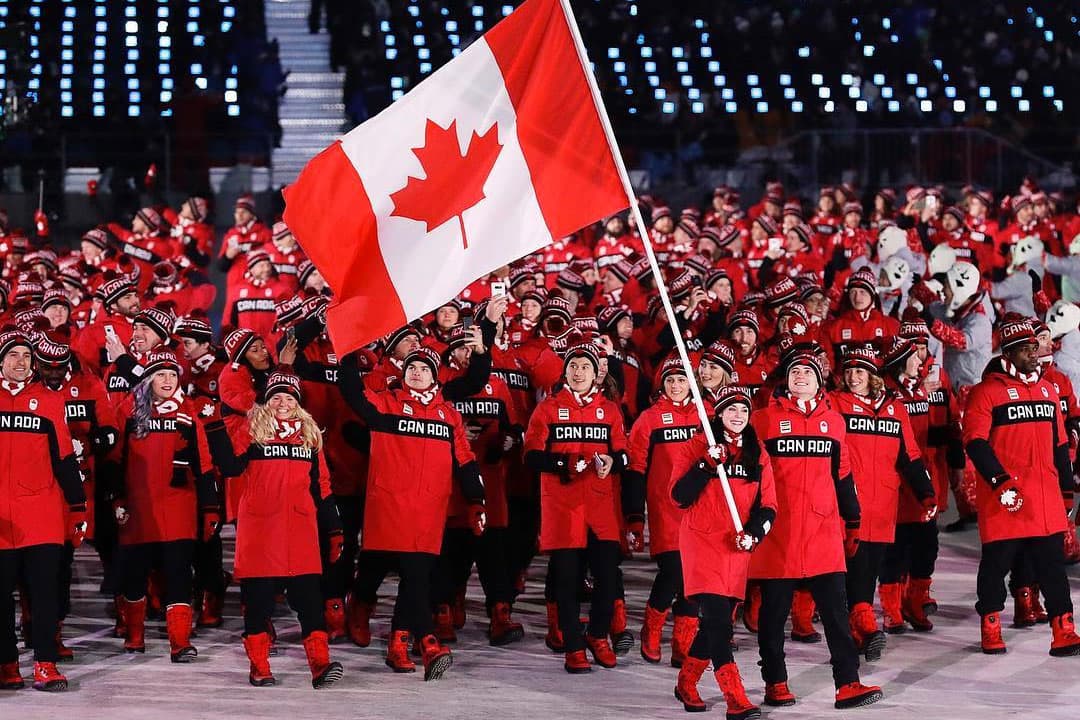 Team Canada’s entrance made history for the nation with its first-ever Canadian man and woman as flag bearers – figure skating power duo Tessa Virtue and Scott Moir. While this decision in a way commemorates their final games, it’s also a poetic message for gender equality, especially considering there is nearly an equal number of men and women competing this year. 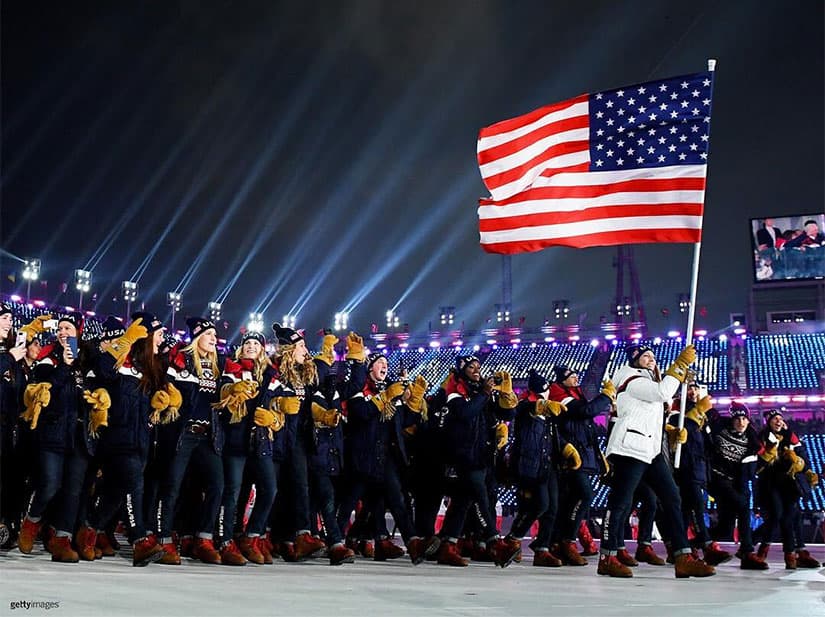 With 242 athletes competing, the U.S. team is the largest Winter Olympics team in history. Outfitted in Ralph Lauren uniforms, they were likely the warmest out of all attendees thanks to their battery-powdered heated coats, which can be controlled through their cell phones.

There was one athlete from Team USA notably absent from the ceremony: five-time Olympian Shani Davis who boycotted the opening ceremony after not being chosen as the team’s flag bearer. The day before the opening ceremony, Davis tweeted, "I am an American and when I won the 1000m in 2010 I became the first American to 2-peat in that event. @TeamUSA dishonorably tossed a coin to decide its 2018 flag bearer. No problem. I can wait until 2022. #BlackHistoryMonth2018 #PyeongChang2018".

OLYMPIC ATHLETES OF RUSSIA
The ongoing saga of the Russian doping scandal has brought much anticipation to this year’s Olympics. In fact, it has continued right up until opening ceremony, with many of the nation’s athletes still unsure if they would be competing in this year’s games. First, in December 2017, the IOC banned Russia from participating in the Olympics after investigations confirmed allegations of state-sponsored doping during the 2014 Sochi Olympics. Then, just a week before the start of the 2018 Pyeongchang Olympics, the Court of Arbitration of Sport lifted the lifetime doping bans on 28 of the Russian athletes.

While there is still a large Russian contingent of 169 athletes with clean records, certain restrictions of their participation are first seen at the opening ceremony. Leading the athletes as flag bearer is not a Russian athlete, but a volunteer appointed by the 2018 Olympics organizing committee. The flag, also, is the Olympic flag, as they are not competing for their nation, but as the “Olympic Athletes of Russia”. However, rumour has it that if things go well during the games, there is potential for Russia to walk into the closing ceremonies under their nation’s flag. 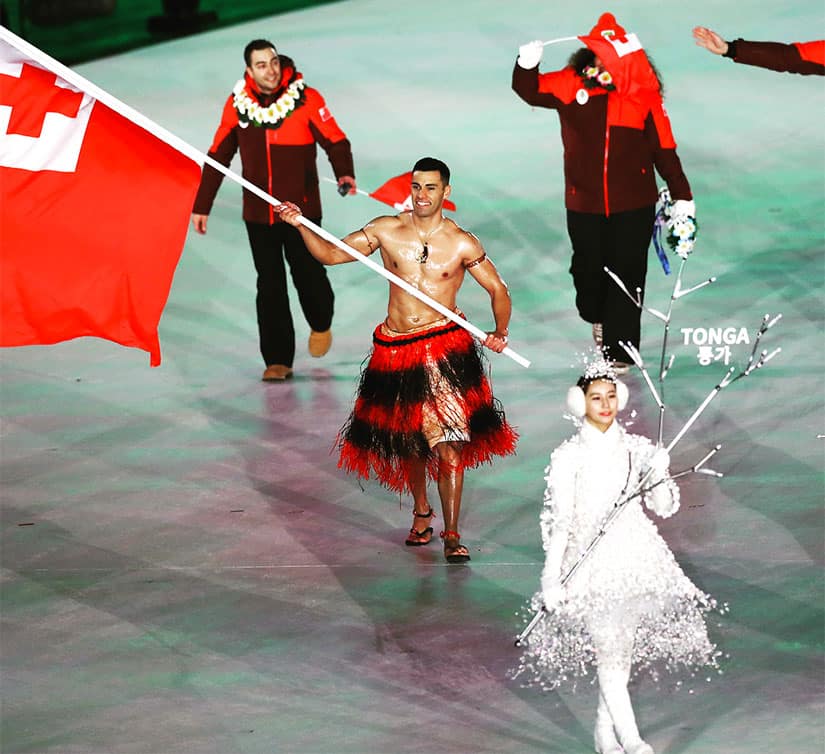 He’s back! Tongan athlete Pita Taufatofua made his second appearance as flag bearer at his second consecutive Olympic games. His first appearance at the 2016 Rio Summer Games went viral after entering the opening ceremonies oiled up in a ta’ovala (a Tongan mat). This Taekwondo athlete has now taken up cross-country skiing to compete in this year’s games, but even with the switch in seasons his opening ceremony uniform remained the same, save for a different ta’ovala. Will his entrance be one of the best moments of the Olympics? 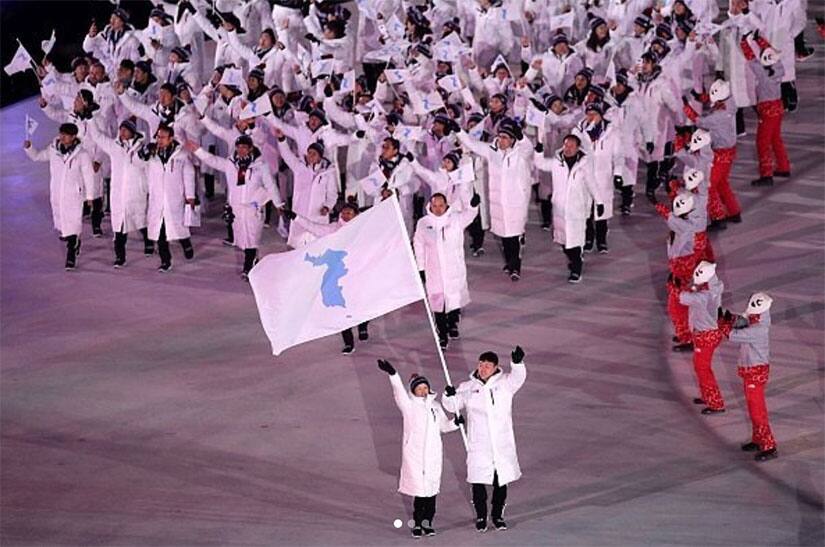 Entering under the unified flag of the Korean peninsula, they were the only other country aside from Canada to have two flag bearers. While they, too, had a man and a woman bearer, they also demonstrated the goal of unity at the games by having one North Korean and one South Korean athlete represented. 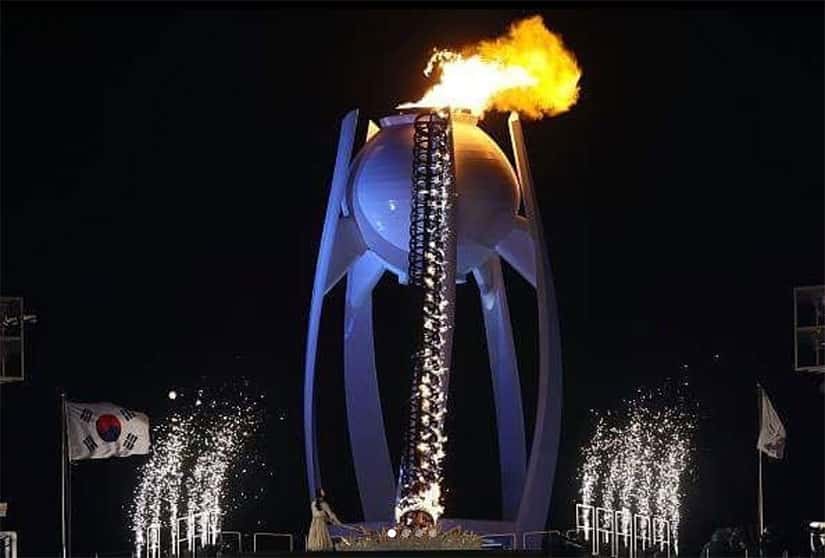 Always a highly anticipated moment for any Olympic opening ceremony is the finale of the torch relay and lighting of the Olympic cauldron. The end of this year’s relay brought together North and South Korean Olympic athletes across a variety of sports – speed skating, golf, soccer, ice hockey, and figure skating. While their identities were shrouded in mystery, the excitement could be heard as the final torch bearer was revealed on a skating rink under the Olympic cauldron – Olympic figure skating champion Yuna Kim.


What were your favourite moments from the opening ceremonies?