The Canadian Charter of Rights and Freedoms is, by all accounts, an essential part of Canada’s democracy. It’s also celebrated around the world as one of our country’s greatest accomplishments.

Entrenched as Part 1 of Canada’s Constitution on April 17, 1982, the Canadian Charter sets out the rights and freedoms that are guaranteed to every person residing in Canada. And for the last four decades, it has served to protect those rights and freedoms from governmental breaches.

Here, in honour of its 40th birthday, we take a closer look at the role the Canadian Charter of Rights and Freedoms has played—and continues to play—in defending, enhancing, and advancing human rights in Canada and beyond.

A brief history of how the Canadian Charter came to be.

Often described as our great national unifier, the Canadian Charter of Rights and Freedoms has come to embody Canada’s independence as a fully self-governing entity from the British government.

But, from the beginning, the new Constitution and its entrenched Charter were less about patriation and more about protecting Canadians from their governments here at home. Before the enactment of the Charter, laws would begin and end with Parliament, with little interference by the courts when it came to potential human rights violations.

Under the long British tradition of parliamentary supremacy, all of these practices were deemed legal and enforceable. Enacting our own Constitution and entrenching it with a Charter was the only way to protect all people in Canada from the power of the state.

In 1960, the Bill of Rights was enacted by Prime Minister John Diefenbaker. It was a landmark attempt by the federal government to protect the human rights and civil liberties of Canadians. However, it soon proved to be ineffective.

Applying only to federal statutes, the Bill of Rights was missing the crucial participation of the provinces, whose jurisdiction includes school boards, property ownership, municipalities, and natural resources. It was also too limited in the scope of its freedoms, with little flexibility to expand these freedoms. Of the thirty-four Bill of Rights challenges that squeezed past the provincial lower courts and into the Supreme Court between 1960 and 1982, only five were successful. (By comparison, there were sixty-three Charter challenges in 1984 alone, four of which were successful.)

Throughout his multiple terms as prime minister (starting in 1968), Pierre Trudeau thought a great deal about designing a constitution that included both an amending formula and new human rights protections. When he found himself back in the PM seat in 1980, he began this project in earnest.

Getting the Gang (of Eight) Together 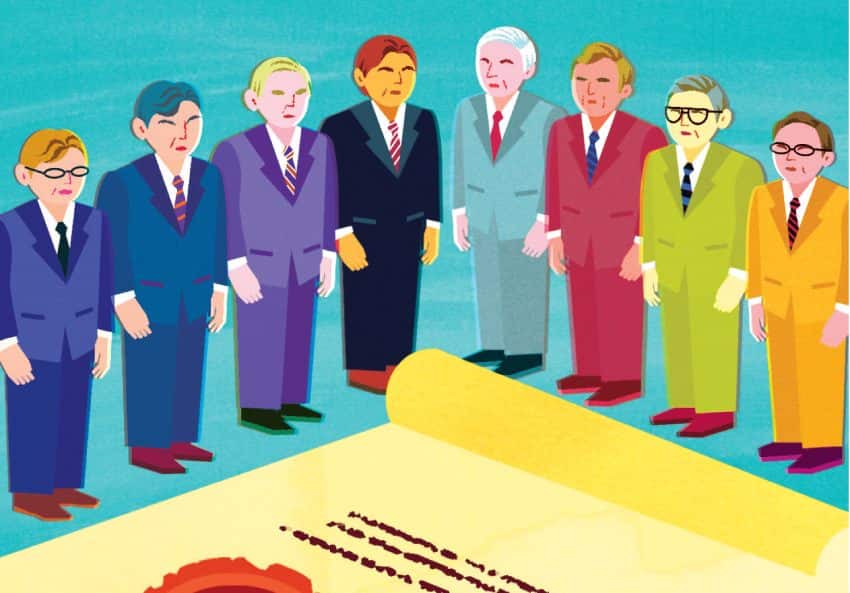 The Charter was introduced during a time of major tension across the country: In 1980, Canada was straining under the shadow of recession, with labour strikes roiling throughout British Columbia. The newly formed National Energy Program, meanwhile, had been introduced in Alberta to nationalize ownership of Canadian oil, driving down competition from American markets and, consequently, oil prices. And under Parti Québécois Premier René Lévesque, Quebec had narrowly avoided a full “Quexit” with “no” winning 59.56 percent of the vote.

While the idea for an amended Constitution plus Charter had the support of the premiers of Ontario and New Brunswick, the other premiers were a harder sell. In their view, adopting a constitutional charter meant relinquishing provincial powers to unelected judges. It also meant unilaterally imposing laws in provinces where they didn’t necessarily make sense—like minority language education rights in either Quebec (where, Lévesque feared, French would be diluted) or B.C. (where French is not commonly spoken).

Although motivated by different goals, the premiers banded together and called themselves the Gang of Eight. They launched a media campaign, lobbied British parliamentarians, and took the federal government to court, appealing the constitutional challenge all the way to the Supreme Court.

In September 1981, the Supreme Court ruled that patriation and constitutional amendment was considered legal but also highly unconventional. Therefore, it required consensus among the provinces.

Thus began a heated, four-day conference in Ottawa. After three days of ineffective bargaining between the federal government and the premiers, Trudeau’s team—made up of Saskatchewan Attorney General Roy Romanow, Ontario Attorney General Roy McMurtry, and then-Justice Minister Jean Chrétien—met in the kitchen of the Government Conference Centre on the night of November 4-5, 1981, to discuss their final offer.

Led by Chrétien, who was tasked with negotiating and crafting the language of the Charter, the three men jockeyed over clauses and rewrites. It had been made clear that Trudeau wouldn’t budge on the minority language rights, but the trio suspected he might give in on the inclusion of a notwithstanding clause, which allowed federal and provincial governments to temporarily override certain rights in the Charter. Trudeau confirmed their hunches.

Late that night, they dispatched their final offers to the premiers by order of who might be swayed, who could convince a colleague to sign, and who might be asleep or awake while the draft was circulated. Dealings between the groups continued through the wee hours, but Lévesque was notably kept out of the discussions. Feeling betrayed upon learning about them the next day, he would go on to refer to the event as the “night of the long knives.”

But Lévesque’s fury didn’t change the fact that, over the course of that night, an agreement, which came to be known as the “Kitchen Accord,” had been struck. All the provinces save Quebec would accept patriation and a Charter of Rights and Freedoms.

Although motivated by different goals, the premiers banded together and called themselves the Gang of Eight. They launched a media campaign, lobbied British parliamentarians, and took the federal government to court, appealing the constitutional challenge all the way to the Supreme Court.

In September 1981, the Supreme Court ruled that patriation and constitutional amendment was considered legal but also highly unconventional. Therefore, it required consensus among the provinces.

With the premiers (except for Lévesque) finally on board, Canada moved swiftly toward its new Constitution. Individuals and citizen groups emerged to lobby for their own interests. The Ad Hoc Committee of Canadian Women on the Constitution reinstated a clause guaranteeing equal treatment and protection between the sexes back into the Charter.

Aboriginal groups also assembled to assert their rights back into the Charter, mounting demonstrations across the country. As a result, Section 35 of the Constitution Act (which is not part of the Charter but begins Part II of the Constitution) includes mention of land claim agreements, gender equality for Aboriginal rights, and participation in constitutional conference, among others.

In April 1982, Queen Elizabeth II signed the Constitution Act, giving Canada control over its Constitution and turning the Charter into law. The Charter would go on to define the values of Canadians and allow the country to cement—with legislative certainty, at every turn—our basic, and evolving, human rights.

What's in the Charter? A Closer Look

There are seven groups of rights and freedoms protected by the Charter:

These include the freedoms of religion, conscience, belief, expression, and peaceful assembly.

Individuals have the right to vote in a government election and have their voices heard.

Everyone has the right to equal protection by the government without discrimination based on race, ethnic origin, religion, sex, age, or disability.

English and French have equal status in all institutes and operations of the government of Canada.

Anyone in Canada who is investigated, detained, or criminally charged must be treated fairly during legal proceedings.

Those who speak the minority language in their province have a right to public schooling in that language, should the numbers allow.

Canadians can enter, stay in, and leave the country largely free from government intervention, and can live and work in any Canadian location of their choosing.

The road to the Charter: a brief timeline 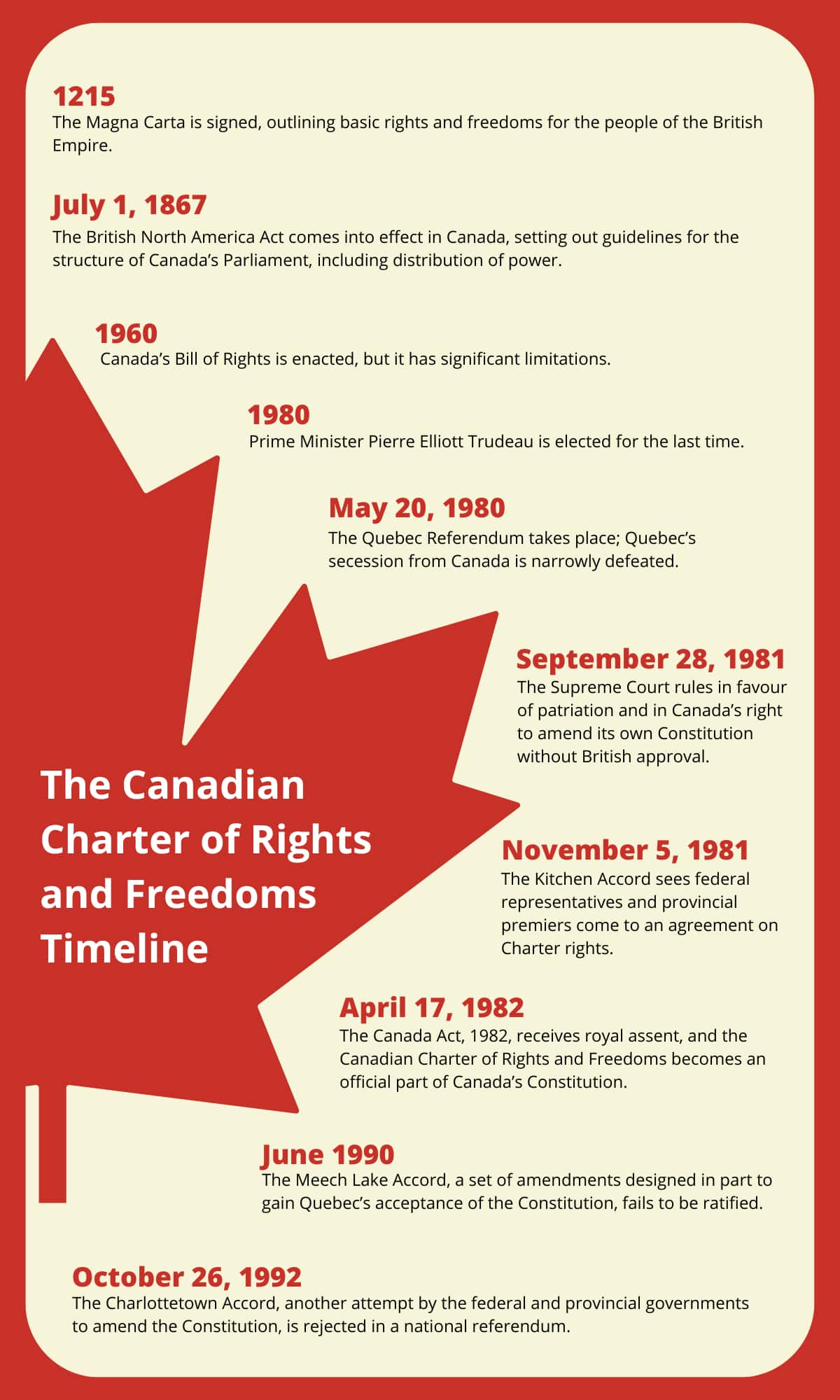 The first twenty-four sections outline the Charter’s major rights and freedoms. The remaining ten sections pertain to how the Charter works.

How it Works (In a Nutshell)

Laws passed by the government cannot violate the rights and freedoms set out in the Charter. If a controversial law is passed, it’s up to Canada’s courts to decide if that law is in violation of Charter rights.

The Charter only regulates government and government employees; human rights violations by private entities are not protected under the Charter.

While Quebec has yet to sign the Constitution, the Charter of Rights and Freedoms still applies to all provinces and territories.

Section 33 of the Charter contains the Notwithstanding Clause, which allows Canada’s federal or provincial governments to pass laws that override certain parts of the Charter for a term of five years or less.

Charting the Path and What’s in the Charter. A Closer Look