For someone who didn’t particularly like track and field when I was in elementary school, I’m pretty obsessed with the track events at this year’s Olympics. Partially that’s because those are the events I’ve gone to the most, but I think it’s more about all the little moments I’ve seen that showcase the athletes’ humanity—and ours, too. A sprinter falls at the end of the race and the people she was just competing against help her up. The look on a hurdler’s face when she knocks over a hurdle, knowing that’s the end of her Olympic journey. The groans and cheers and waves of a stadium full of people. It’s pretty awesome.

And speaking of awesome… this was my second time seeing Andre and Usain race, and it was, well, you know. Yes, other athletes were there, too, including Andre’s fellow Canadian Aaron Brown, Justin Gatlin of the US and Jamaica’s Yohan Blake… but this race was really about Andre and Usain, newly-minted BFFs. They finished within 0.02 seconds of one another and, near the end of the race, they looked like they were laughing and joking. It was really cool to see a friendship we’ve seen in post-race photos and Snapchats play out on the track, too. 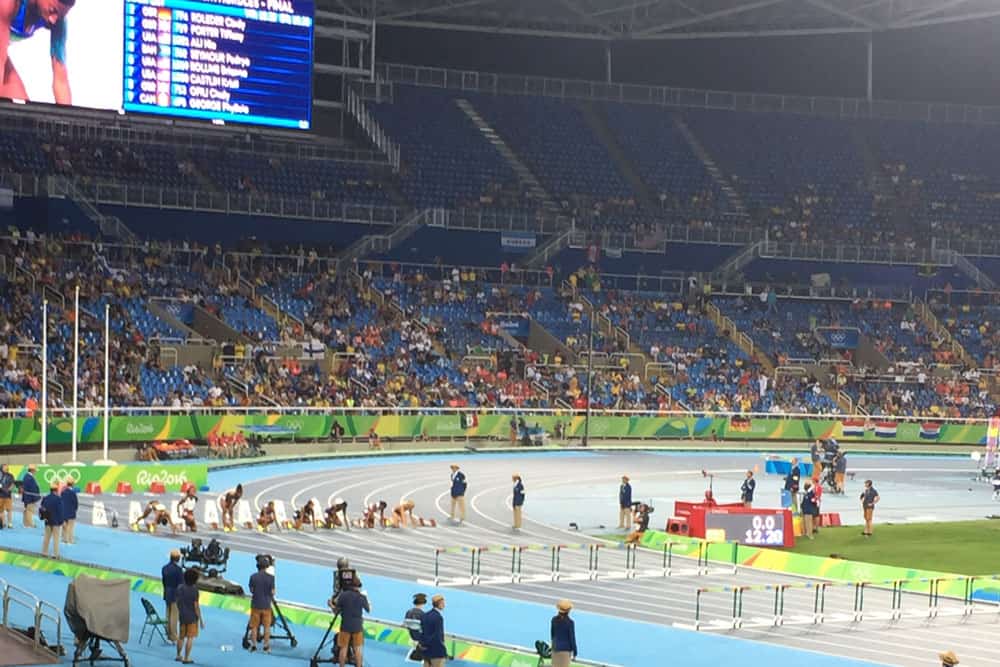 Canadian hurdler Nikkita Holder was disqualified in the semi-finals of the women’s 100m hurdles, and though I would have loved to see her make it to the final, I thought this quote from her post-competition interview was so great: "Well, I was moving and sometimes when you're moving, you just get knocked down. I totally clipped a hurdle and it took me out. It happens. You kind of have to be crazy to hurdle and falling is part of it." (Scott Oake asking her how it feels to be a single mom and making her cry, on the other hand? Not so great.)

Canadian decathlete Damien Warner (pictured, above) says he had hoped to score more points on day one, but I think his third place finish was solid—and that he can do even better on day two. Ashton Eaton’s performance was another decathlon highlight. He’s Brianne Theisen-Eaton’s husband (which earns him honorary Canadian status) and I ended up reading a lot about him as I did research for my interview with her… so I know he’s pretty much the best decathlete in the world. Seeing him in person was spectacular.

If I couldn't see a Canadian on the podium, a history-making finish for three American hurdlers is the next best thing, I guess. But in all seriousness, it was pretty cool to see Brianna Rollins, Nia Ali and Kristi Castlin finish within tenths of a second of one another.

4 awesome moments from Canadian Living's second day at the Olympics

Day 4 in Rio and we're all about the athletics events