The multi-hyphenate workhorse stars in a new TV series, even as she reaches new levels of success as a Hollywood screenwriter.

Like a woman who knows she has more goals than time to meet them, Kathleen Robertson seems to get busier with each passing year, adding new credits to her IMDB page at a rapid-fire pace. New to her list is CBC Gem TV series Northern Rescue, premiering March 1, 2019, which follows the story of a father who moves his three kids to a small town after his wife passes away unexpectedly. Robertson plays the aunt who steps in to help raise her sister's family.

From her home in Los Angeles, Hamilton-born Robertson chatted with us about returning to Ontario to shoot Northern Rescue, how turning 40 affected her career, her upcoming writing projects (including a feature film starring Julia Roberts and a TV series produced by Charlize Theron) and how she juggles her many responsibilities.

On making Northern Rescue fit her busy schedule:
Robertson says her acting projects always have to check off certain boxes before she signs on—everything from timing (say, she has a three-month window for filming) to script (she wants something character-driven and dark). When it came to her latest TV series, Northern Rescue, so much of it was about location, location, location. "The fact that it filmed in Ontario was a huge plus for me because my family's all very close by," she says. "It was almost like a paid vacation. It was an amazing summer." She also loved that it was an ensemble show, which meant that, while her character was a lot of fun to play, she wasn't needed for every single scene. "With a series, it has to be something that affords me days off where I'm writing," she says. "During the entire production of Northern Rescue, I would work however many days an episode, and then I would have multiple days off an episode and those would be my writing days. So I was able to do both. Otherwise it just wouldn't be possible for me."

On being forever Canadian:
Once a Canadian, always a Canadian. "My husband always laughs because he says I still refer to Hamilton as home," Robertson says. "I've now lived in L.A. longer than I lived in Canada, but it's always going to be home for me. That's where my sisters are, my parents, my best friend since I was four years old. I'm super connected to it."

On her experience of aging in Hollywood:
Though the idea that acting roles dry up for women as they get older has always been a problem, Robertson has had the opposite experience, with some of the best roles of her life coming her way later in her career. She nabbed the role of chief of staff to Kelsey Grammer's mayor character in Boss when she was 38. "I read it and was like, ‘Oh yeah, I'm never going to get this role,'" she says. "Then I went in and read and it was one of those weird things where they were like, ‘You are the part.' I found myself in my late 30s and I just got the coolest role I've ever gotten as an actor and it changed everything." She went on star as a police officer in Murder in the First after 40, thanks to her ability to play tough, strong women. "I'm getting really amazing roles that I never would have gotten when I was in my 20s." 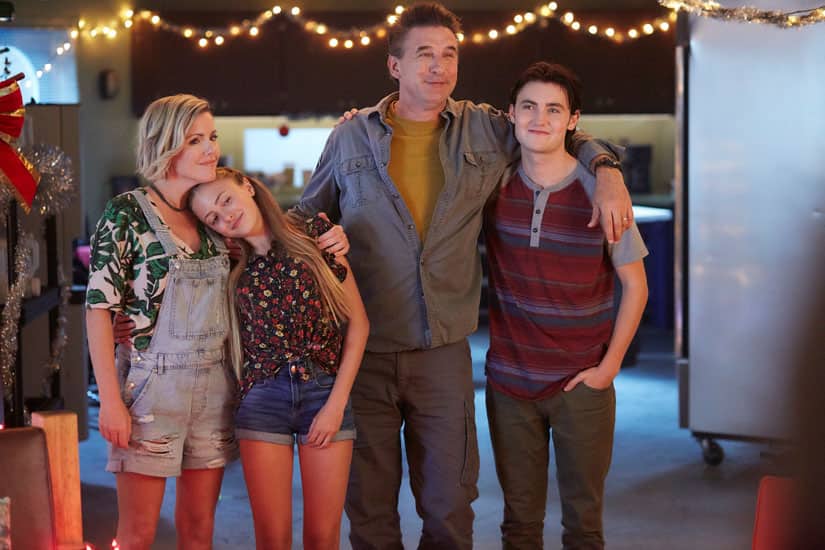 On launching her writing career as a backup:
From the time she was a kid, Robertson loved to write—everything from journal entries and short stories to scripts. "Any time I would feel stressed out or emotional or happy or sad, writing was always my outlet," she says. But when she reached her 20s, she started to worry that she might need a backup for her acting career once she aged out of all the good roles. Since writing was her other love, she optioned a book and wrote what she claims was a terrible screenplay. But she kept writing. By the time she was in her late 30s, she'd finally created Your Time Is Up—the "magic script" that launched her writing career. "I gave it to my husband, who's a producer," she says. "He's kind of my creative partner and he's brutally honest. I said, ‘Read this and tell me what you think.' He read it and said, ‘Oh my god, this is so good. You're a real writer.'" Robertson gave the script to her agent, who then passed it along to literary agents and, before she knew it, everyone in the industry wanted to see what else she had written.

On being an actor-turned-writer:
With more than 30 years of acting experience on her resumé, Robertson has an edge over the competition because she understands character and how to create a role that an actor can't wait to inhabit. "I've read so many [bad] scripts and worked on so many [bad] projects, so I know what makes something good," she says. And that holds true when she's writing for a specific actor such as Julia Roberts, who will star in Little Bee, Robertson's script adapted from the book of the same name. "I know exactly what Julia Roberts wants. I know how to write Julia Roberts a role where she'll be like, ‘Oh my god, I can't wait to play this role.' And it's because I've been an actor forever."

It's because of Robertson's unique experience and ability to create a character-driven script that she's been hired to write Lady Killer, based on the Dark Horse comic book series. "It's like nothing I've ever written before," she says. "I'm not the obvious choice for it. Most of what I write is much smaller. But I know they hired me thinking, ‘You can make more than a big, stupid studio movie with explosions. You can actually make us care about the characters.'"

On her Universal deal:
Expect to see much more from Robertson because she's inked a contract with Universal Cable Productions to brainstorm, produce and write scripted television material—whether original or inspired by articles, podcasts or books. "I saw this documentary called Daughters of the Sexual Revolution that's about the creation of the Dallas Cowboys cheerleaders in the ‘70s, and I thought it would be such a cool TV show," she says. "So I brought the idea to Universal and then we gave it to Charlize Theron (who also has a Universal deal) and asked, ‘Do you want to produce this?' She said yes, so now I'm developing a TV show that's kind of like Mad Men with cheerleaders."

At only 45, Robertson has already had a long and full career. But it seems that, thanks to her unique voice and work ethic, she's only just beginning. "I've always been a workhorse," she says. "I like to put my blinders on and work." But that also means she's always thinking two steps ahead, and that's not always a good thing. "It's something I have to work on as I get older. When good stuff happens to me, my natural instinct is to say, ‘OK, cool,' and move onto the next thing." Now if there's anything she can improve on, it may just be enjoying the ride.

Why our obsession with Céline Dion goes on

After a career that spans almost four decades, our love for the Canadian singer is stronger than ever.