Carol Off, author and cohost of CBC Radio One's As It Happens.

When it comes to her career, Carol Off doesn't make compromises; she takes risks. As a new grad from London, Ont.'s Western University in 1981, Off promised herself she wouldn't accept anything less than the job she wanted. But the job she wanted—covering hard news and conflict—felt out of reach. "It was really difficult for female journalists in the 1980s; it may as well have been the '50s," says Off, now an award-winning journalist, author, documentary filmmaker and cohost of CBC Radio One's popular show As It Happens. "Women just weren't supposed to cover the tough stuff."

While she held out for her chance to break into a man's world, Off freelanced covering the arts. Short on cash but long on ambition, she navigated Toronto by bike—even in winter, when she'd protect her ride with a garbage bag. "I'd lock it up in front of these lavish receptions I was reporting on and walk in," she says with a laugh. "It's a bit embarrassing now, but I always carried a bag with me, and at the end of the event, I'd slip some of the leftover food into it—I supplemented my groceries with stolen food." 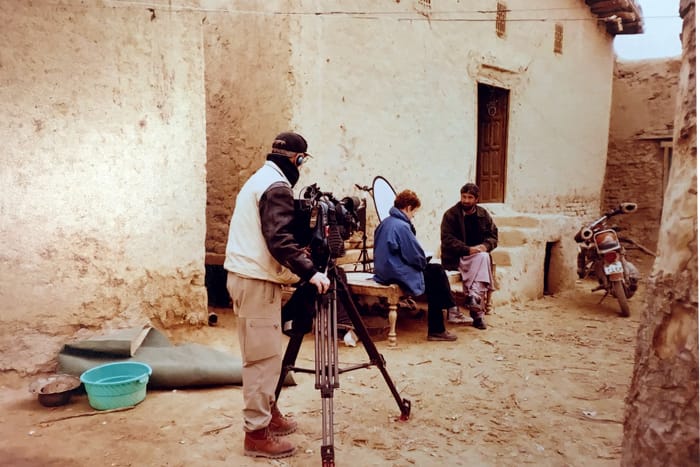 Northern Afghanistan, 200
Cameraman Brian Kelly films journalist Carol Off interviewing Asad Aryubwal for the documentary In the Company of Warlords. Off tells Asad’s story in her new book, All We Leave Behind.

That didn't last long. The world was in a state of conflict, and women were pioneering covering foreign assignments. That's when Off took the leap of a lifetime: After her marriage ended, she took her half of the money from the sale of the house, sold her possessions, paid off her student loans and bought a plane ticket to Pakistan. The assignment? A promise that CBC would buy the story if she could score an interview with politician Benazir Bhutto—the country's future prime minister—who was in jail at the time. "It was scary. I thought, I'm in over my head," she says. "But you have to take chances."

That leap of faith delivered much more than she bargained for. Upon arriving at her hotel in Karachi, Off found a message waiting from CBC, requesting that she return to the airport. Pan Am Flight 73 had been hijacked by terrorists, one passenger was already dead and Off was close to the scene. Soon, she was running across a tarmac amid chaos and dispatching details to several news agencies, covering a crisis that, in the end, left dozens dead. "A lot of people died," says Off of the tragic event that set her career in motion. It's some­thing that's stayed with her ever since. 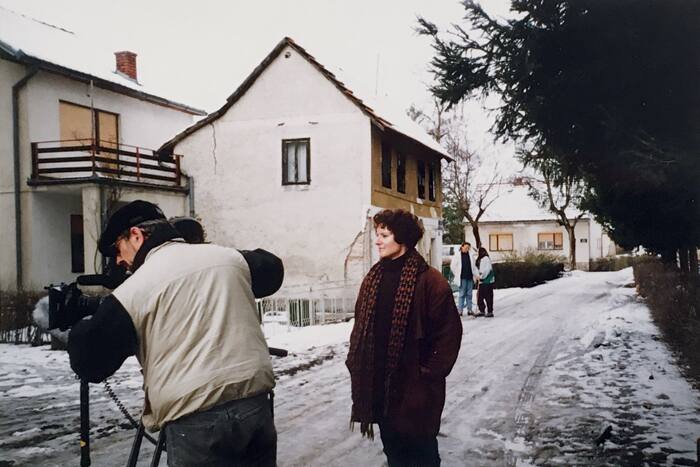 Northern Bosnia, 1995
Off reports on the ethnic cleansing of Muslims near the end of the Bosnian War, a subject she explores in the documentary Flight From Bosnia and her book The Lion, the Fox and the Eagle.

"Journalists all too often have their best moments when other people are having their worst," Off writes in her latest book, All We Leave Behind, which touches on the start of her career but focuses on the compelling story of Asad Aryubwal, whose life was in danger as a result of what he exposed in Off's Gemini Award–winning documentary, In the Company of Warlords. It's a lesson she learned over and over again—not only that day in Karachi, or with Asad, but also in the crises she's since reported on in places such as Kosovo, Rwanda, Bosnia and Afghanistan while covering those hard-hitting stories that she had always desired.

Off's most terrifying moment? When a warlord on the Ivory Coast threatened her life while she was investigating child slavery in the cocoa trade. ("I was leaving the next day. I packed my bags and slept in my clothes on top of the bed waiting for the sun to rise.") One of the strangest? When the chief of a poor Sudanese village under threat of ethnic cleansing offered 47 heads of cattle for her hand in marriage. ("I had to convince him that my husband needed me more than he did, and we were laughing so hard by the end of it. He was so lovely.") 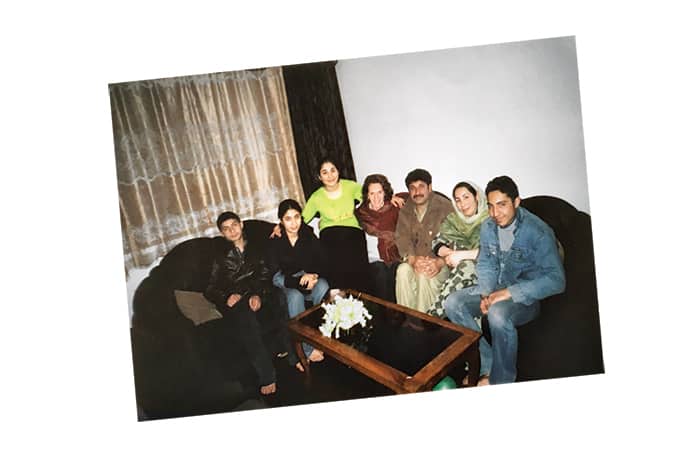 Kabul, 2006
The Aryubwal family—Asad, his wife, Mobina, and their four children (Mujeeb, Hossai, Robina and Muhammad)—with Off in their home in Afghanistan's capital.

During this time, Off began to realize that being a female journalist had its advantages, after all. She could, for example, enter homes to interview women in Muslim communities under purdah, which prohibits nonrelated men from interacting with women. "We had this tremendous access to the inner worlds of the stories we were covering," she says. "Women had a great deal of influence on changing how war and conflict is covered. We've moved away from the bang-bang of the front line to show how these crises affect real people—I think women had a lot to do with that change."

Men seemed more comfortable talking to women, too—especially warlords. "Because they marginalized the women in their own societies, they thought what they said to me wouldn't go anywhere—we were sort of harmless in their eyes. We could ask them anything," says Off with a laugh. "I'd say, ‘That's so interesting, Mr. Warlord, and so then, you killed them all? Could you tell us about that?' And they would just tell me things! I'd be thinking, I can't believe you're admitting this." 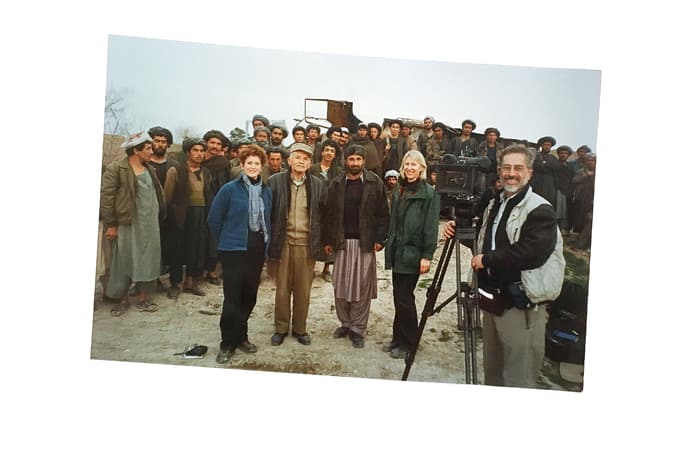 Northern Afghanistan, 2002
Off poses with Asad and the documentary film crew in front of the Qala-i-Jangi fortress, the site of an infamous uprising in November 2001.

Out of the field and now on air, Off cohosts CBC's flagship evening radio show, As It Happens, with Jeff Douglas. On it, she's funny, insightful and tough as nails—both then–Toronto mayor Rob Ford and then–immigration minister Chris Alexander have hung up on her. "Several politicians have hung up on me, actually," she jests. 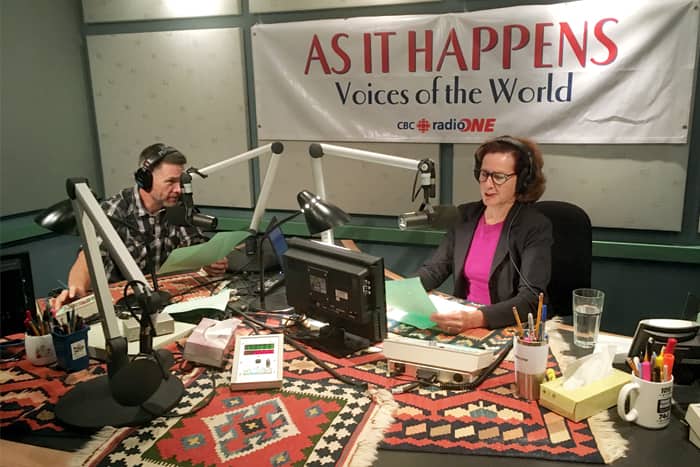 In the Studio
Recording an episode of CBC's flagship evening radio show, As It Happens, with cohost Jeff Douglas.

It's safe to say working on As It Happens is a dream gig for Off. "I love it. I just love what I do. I can't say enough about what a joy it is to work at that show, being part of a national discussion," she says, which is humble since, in many ways, she's leading the national discussion—and women in journalism.

As a result of their wildly popular podcast, Taggart & Torrens, Jeremy Taggart (former drummer of Our Lady Peace) and Jonathan Torrens (Trailer Park Boys) compiled their favourite oh-so Canadian memories from on the road into a hilarious book that reads like a conversation you’d have with you best “bahd.” We caught up with the comedic pair to learn more about their book, Canadianity: Tales from the True North Strong and Freezing, and to find out how they "made it" in the Canadian art scene.

Profile: Carol Off, the award-winning journalist