The yoga trainer is committed to sharing her story and inspiring others.

When Christine Yanke's husband was arrested, her world fell apart. But after hitting bottom, she harnessed her life and became an inspiration for family, friends and anyone she helps.

One morning in March 2001, I woke up early, feeling on edge. My five-year-old son was nestled in bed between me and my husband, Don. Our two other sons, aged nine and seven, were sleeping in the next bedroom. I thought I could hear leaves rustling outside our Ancaster, Ont., bungalow, like someone was walking around. Suddenly, I heard men shouting and a loud bang. Don woke up and looked at me. "It's a raid," he said calmly. Seconds later, several police officers barged into our room, pointing guns at the bed. I felt like I couldn't breathe. The police surrounded Don, forced him to the floor and handcuffed him, then they took him away.

My husband was a member of the Hells Angels. His arrest, along with the arrests of more than 130 others, was part of a four-year investigation by police in Ontario and Quebec into the gang's activities. Don was charged with gangsterism, conspiracy to commit murder and drug trafficking. I'd known he was a member—that was no surprise to me—but his arrest came as a huge shock. Even then, I fiercely believed he was innocent, that the charges were bogus; he told me they wouldn't stick. Don was my husband and the father of my sons, and that was all that mattered to me. I know now that I was naive. 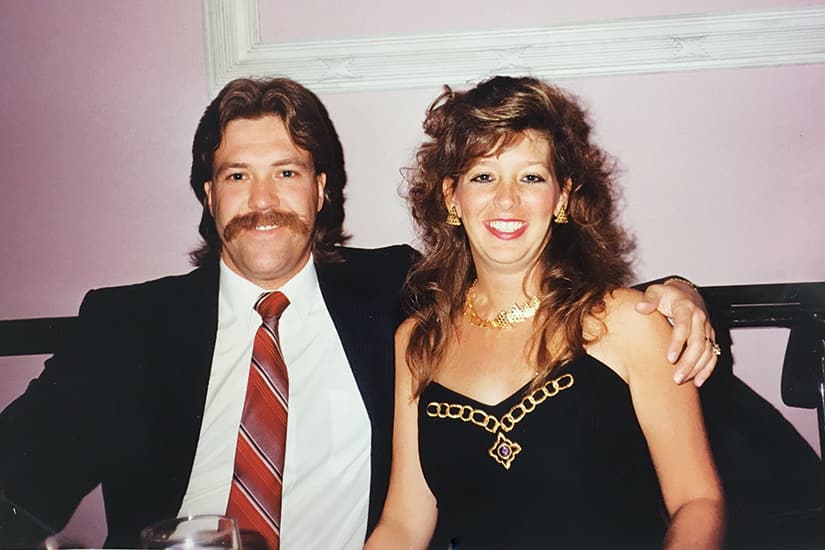 Christine Yanke long believed in the innocence of her husband, Donald Stockford.

I met Don when I was 19. I was a secretary at a real estate office in Hamilton, and he was an agent. Once we started dating, I fell in love with him easily; he was sweet, confident and kind. During our first year together, he mentioned he wanted to join the Hells Angels one day. One of his friends was a member, and he'd spent time at the group's clubhouse in Montreal. Don was into motorcycles and had owned a Harley-Davidson since he was 18. I didn't think much of it. I'd always known I wanted a white-picket-fence life: Be a stay-at-home mom with a husband and several kids. With Don, I saw my dream coming true.

We got married in 1989. I thought that once Don became a father, joining the Hells Angels would lose its appeal, but after the birth of our first son in 1992, he joined the gang. He had to go through a process called "prospecting"; I didn't know what that involved, but he was away for about a year, living in Quebec. He rented a house there for me so our son and I could visit him. Once Don became a member, he was away often, travelling across the country. We had an unspoken don't-ask-don't-tell rule: I didn't want to know what he did when he was away, and he didn't offer any details.

Don and I had two more children, and it was easy to focus on my life at home; the boys kept me busy. When Don was home, we were your average family: We had toys lying around the house, not Hells Angels memorabilia. Don didn't look like a biker; he was a clean-cut jeans-and-T-shirt kind of guy. He never parked his motorcycle at the house—it stayed in Quebec. On weekends, we went to our sons' hockey games and hosted breakfasts for the kids my children played with, along with their parents. We took a family vacation to Walt Disney World. Life felt very normal. 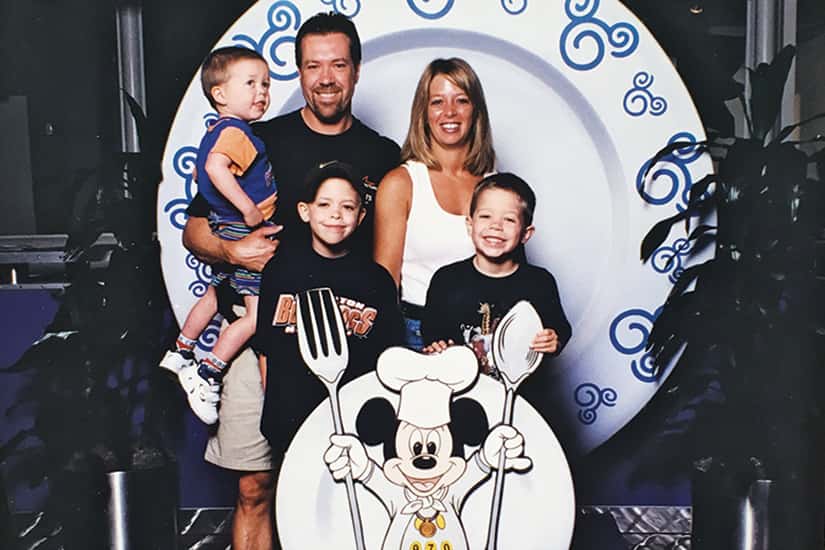 Christine, Don and their sons enjoyed a normal family life, including a trip to Walt Disney World.

Don's trial began in Montreal in early 2004, three long years later. In that time, I'd managed as a single mom, cooking meals and shuttling the boys to hockey. Don and I didn't have joint bank accounts, so I had to get signing authority to access his savings. There was only $2,000 in the account, and I needed to pay the bills, so I applied for social assistance. The sad irony of the wife of a Hells Angel being broke was not lost on me. After six months, I got a job driving a garbage truck for the City of Hamilton. Though my parents helped me with my sons, it was a very difficult time. I'd always been someone who enjoyed a glass of wine, but I started to drink more and more—it helped relieve my stress. I'd attend the boys' hockey games with a travel mug full of a vodka cooler. Some weekends, I'd get a babysitter so I could go out partying. On one of those nights out, I first tried cocaine; I liked how it made me feel happy and helped me forget my problems. Whenever I felt exhausted and beaten down, cocaine picked me up. Near the end of the four-month trial, I returned home one night from Montreal to find my mom, who'd been staying at my house with my sons, in bed, unresponsive. She'd had a brain aneurysm. My mother and I had been very close—she was my confidant and had always been there for me. I was devastated. I didn't know how I'd get by without her.

The blows kept coming. About a week after my mom's death, Don was found guilty. My world shattered into a million pieces. I'd convinced myself he was innocent and that he would come home and we'd be a family again. But that wasn't going to happen—he was sentenced to 20 years in prison. I took a leave from work and stopped seeing my friends; I didn't have the energy to interact with anyone. After I put my sons to bed, I'd drink alone in the basement. I began to use cocaine more frequently, too, often alone at home. I knew I was in trouble, but whenever I tried to stop drinking and using, I'd feel this hopelessness come over me, and I couldn't deal with it. I wanted to numb those heavy, scary feelings. 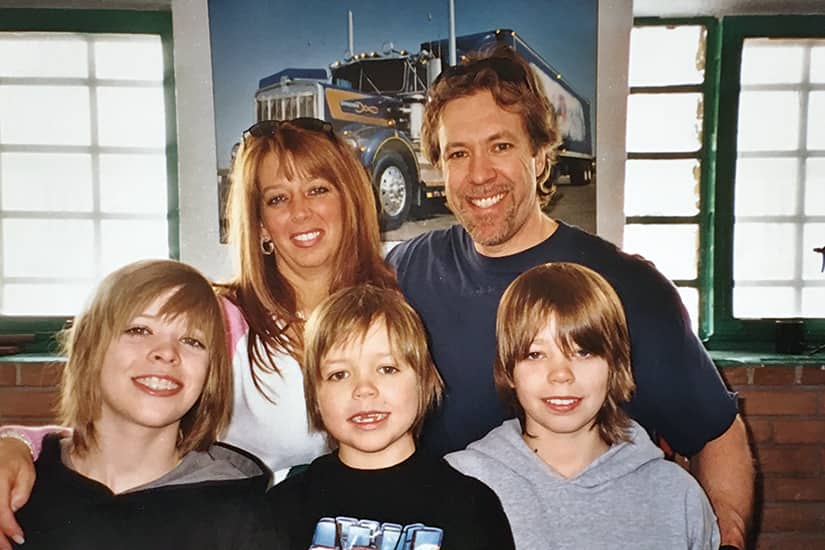 Christine and the boys visited Don in the Montreal jail where he served his sentence.

Finally, in the fall of 2004, after a few friends expressed concern, I saw a psychologist who delivered the wake-up call I needed. I knew my mom wouldn't be proud of how I'd been acting; my sons needed me. So, at the suggestion of my doctor, I decided to go to Womankind Addiction Service, a rehabilitation centre in Hamilton. I signed up for the day program; every day after the boys went to school, I'd go to rehab. I was home every night for dinner. After five weeks, I finished the program feeling committed to my sobriety. I stopped hanging out with party-loving friends. I no longer went to the bar. Thank­fully, the boys' hockey schedule kept me occupied, so I didn't have much time to be alone with my thoughts. I bottled up my feelings of grief and anger and tried to plaster a smile on my face. I pretended everything was fine.

Over the next few years, my life was full of change. The boys and I moved into a new house. I joined a running group and started regularly going to the gym. I decided to leave Don. Then, I met a man named Roger, whom I fell in love with.

In 2010, though, my world was rocked once again. My father, who had been struggling since my mom's death, committed suicide. I tried to take something positive from this awful event: I used some of the inheritance I received to sign up for yoga-teacher training. Through yoga, I came face-to-face with the emotions I'd suppressed for so many years. The deep reflection forced me to look inward and see that the happy face I'd put on for my sons and the other people in my life was really a mask. In 2012, after noticing several strange symptoms in myself, including skittishness, sensitivity to noise and emotional outbursts, I saw a psychiatrist who diagnosed me with generalized anxiety disorder and post-traumatic stress disorder (PTSD). 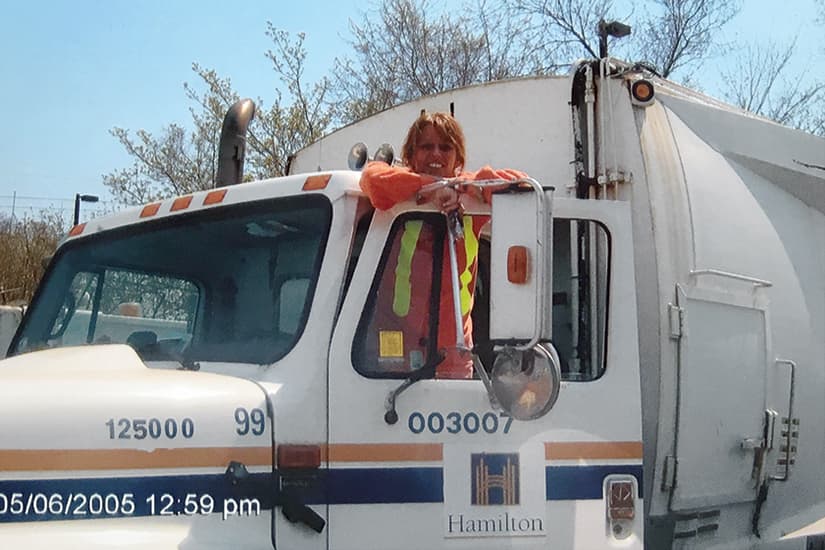 A NEW LEASE ON LIFE

When I discovered a yoga program specifically for PTSD, called YogaFit for Warriors, it seemed like a perfect fit. I signed up for the training and began teaching the program—which targets parts of the body that store trauma and tension, such as the hips, shoulders and a core muscle called the psoas—at a local yoga studio. Then, in 2014, I came full circle: I walked back into Womankind to teach yoga to the women there, women who were like me 10 years ago, fighting addiction. It was an amazing feeling.

In the years since, Don has been paroled. We celebrate our sons' birthdays together, but that's all I see of him. I don't feel resentment toward him—I've created a life for myself that I love. I've been sober for 13 years. Roger and I have been together for 12. I still teach yoga, including YogaFit for Warriors, and work as a life coach. I've also written a memoir I hope to publish one day. I want to share my story and help people who are dealing with their own struggles. I could have taken a different path, and I'm grateful I chose the right one. It hasn't been easy, but the challenges I've faced have made me stronger. I'm proud of who I've become: a self-aware, positive woman and mother who's full of gratitude for her life.

The power of resilience

Life can deal us some pretty heavy blows. Sometimes, it pulls the plug right out from under us. But the key to happiness, success and, ultimately, survival is resilience. Here's how FedEx Express Canada president Lisa Lisson leaped over obstacles and learned the unsung secret of life.