Beer is so much more than just a drink. It can be used to polish copper, fight stains, put out fires, marinate meat and now it’s popping up in spas. We went to the Kalani Spa at the Fairmont Royal York in Toronto to try its limited edition treatment: RaspBeery Coco Lait Body Wrap and Express Facial.

Working in beauty for almost a decade has given me the opportunity to try some rather bizarre, yet mostly delightful, spa treatments. From a snail slim-infused facial (disclaimer, no slugs were harmed) in Phnom Penh, Cambodia to a snake skin pedicure (no pythons were injured, the ecdysis was used) in Las Vegas. I’m game to try it all.

When an email landed in my inbox from Muskoka Brewery my cursor was hovering over the forward button—to send to my colleagues in the Canadian Living test kitchen—but I quickly realized it was indeed intended for me.

Apparently beer spas are kind of a big deal in Europe. According to the team at Muskoka Brewery, beer helps improve elasticity, reduces acne and can brighten skin. 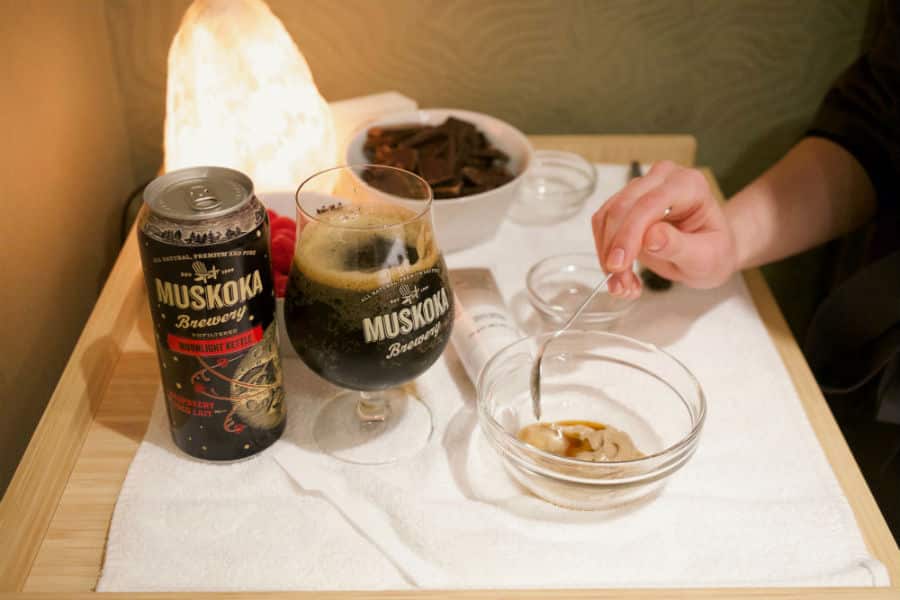 The Treatment: The Bracebridge, Ontario beer brand has teamed up with the Fairmont Royal York’s Kalani Spa in Toronto to create a beer infused spa service. Intrigued? So was I. The RaspBeery Coco Lait Body Wrap and Express Facial is a unique wrap and facial made using Muskoka Brewery’s RaspBeery Coco Lait beer—a dark brown, fruity stout.

The treatment begins with a dry brush instead of a typical body exfoliant. The brush boosts circulation and sweeps away dead skin cells while also stimulating the lymph nodes. It’s also said to be great for reducing the appearance of cellulite. NOTED! My estheticians, Anna, used a soft but firm brush and started at my feet, working her way up. Her technique was small strokes in an upward motion mixed with a variation of a circular motion.

Next, the chocolate body wrap was painted on. While I was “marinating” Anna gave me an express facial which included cleansing, exfoliating and a mask which was comprised of vanilla, pomegranate, liquorice extracts and RaspBeery Coco Lait—of course. After the facial, the excess chocolate treatment was removed with warm damp towels and a light body cream was applied. Before I left the spa, I was handed a can of Muskoka Brewery's limited edition brew to take home, which is all just part of this service.

The results: After the 60-minute beer-infused treatment the skin on my body was left smoothed, soothed and supple. As for the facial, my skin was lightly moisturized and brighter. If you enjoy decadently sweet smells this treatment is a must try. The fragrance lingered on my skin well into the evening but the chocolate smell wasn't cloying, instead it was rich and sophisticated.

Cost: RaspBeery Coco Lait Body Wrap and Express Facial, $170 available from November 7 to December 15 at the Kalani Spa at the Fairmont Royal York.