Now available for rent on Airbnb, the Woods x Sport Chek parka yurt is a cozy all-Canadian getaway made for couples.

There's nothing like love to keep you warm on a cold winter night—except maybe a well-crafted parka. Turn that parka into your very own love nest in the middle of the forest and you've got it made. That's what I did on November 16, the day of Toronto's first snowfall, when I drove up to Ontario's Haliburton Highlands to spend a little quality time with Jamie, the guy I'm seeing (not this guy). We spent the night cuddled up in Canada's first parka-insulated yurt, created by Sport Chek in collaboration with storied Canadian outerwear brand Woods to celebrate the launch of the new Woods winter collection. Now available for rent through Airbnb, the temporary structure is lined with the same materials as the Woods Alverstone Expedition Parka to keep glampers toasty warm. It's the perfect destination for adventurers, but Jamie and I found that there's something undeniably sexy about it, too. 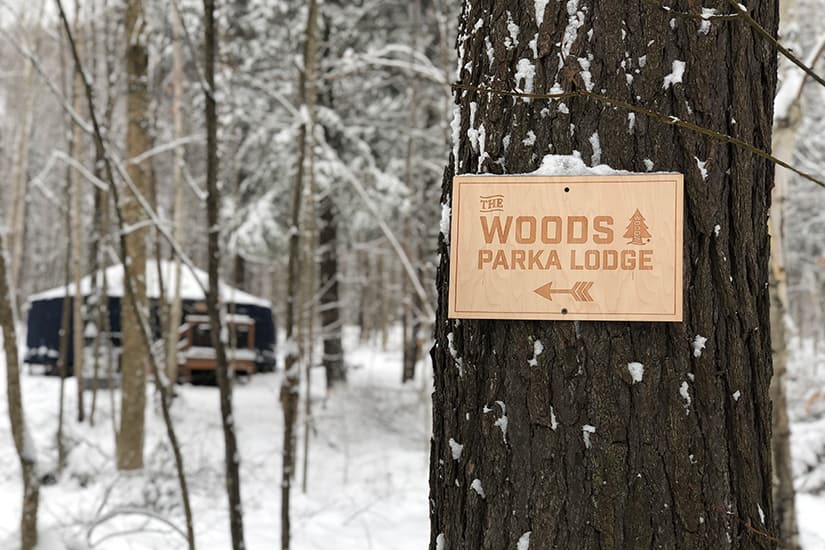 Sport Chek wants a select number of lucky Airbnb renters to have the opportunity to learn about the Woods brand—famous for designing Captain Bernier's Arctic parka in 1903 and for outfitting the first Canadians to climb Mount Everest—and to try out the Alverstone Expedition Parka or McBride Bomber Jacket for themselves. Not only will guests get to keep their parkas as a gift, but they'll also sleep in a fully stocked yurt with décor that speaks to Woods' 133-year legacy. We got to try it out ahead of its official launch.

It took us about three hours to drive from Toronto up to Kennisis Lake in the Haliburton Highlands, southwest of Algonquin Provincial Park. It was an easy drive until we reached the property, where snow had been falling all day, and we slid into a ditch while trying to park. You'd think that might have put a damper on our stay, but our Airbnb host, Lorrie, called Bernie Nicholls (who played over 1,100 NHL games in the ‘80s and ‘90s) to tow us out. Jamie is a hockey buff, and he couldn't stop talking about Bernie's "great assist." With all things considered, I'd call it a win.

Forget everything you thought you knew about winter camping. This yurt, though built in only two days and lined with durable parka material, is basically a cabin complete with Wi-Fi, a propane fireplace, indoor toilet and King-sized bed piled with pillows and duvets. The kitchen has a water dispenser and tiny fridge, plus lots of cooking tools and counter space so we were able to prep food to cook on the BBQ located on the front steps. There's a furnished living room with a record player, board games and books, plus a stargazing nook beneath a large skylight.

Aside from the fact that it's smack-dab in the middle of the Canadian wilderness (think deer, wild turkeys, snow-dusted trees and a frozen lake), the yurt is also packed with locally thrifted décor, Woods memorabilia, an all-Canadian Endy mattress and plenty of classic records that include national treasures like Neil Young, The Guess Who and Gordon Lightfoot.

We found plenty to entertain us inside the yurt, but you can also take a snowy hike with the snowshoes provided, try a private yoga class at the house on the property for an extra $15, or go for a drive and visit local breweries, the Haliburton Forest Wildlife Reserve (with snowmobiling, dog sledding and a wolf observatory) or the Haliburton Sculpture Forest. 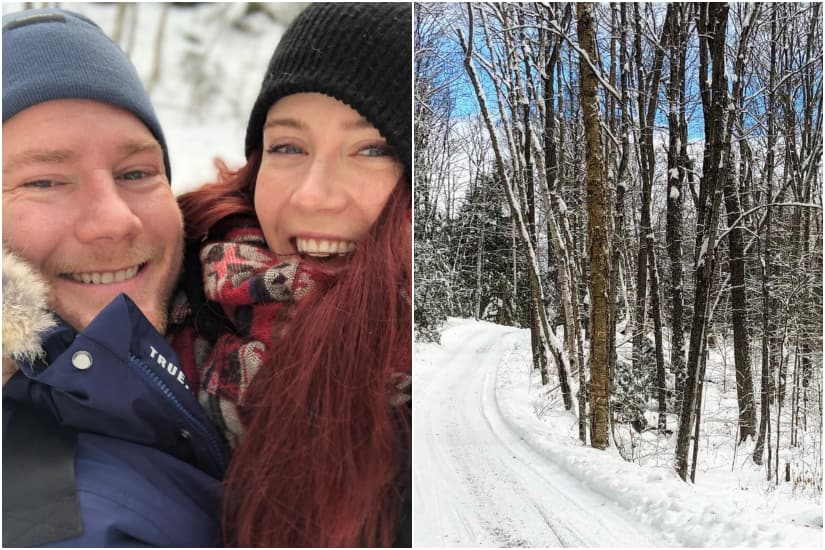 There's nothing more romantic than getting away from the city and hibernating, cooking together or feeding each other s'mores (which we cooked on the BBQ because we were too lazy to clear the outdoor firepit of snow). We were extra lucky because we got to experience the first snowfall, which brought powdery trees and a blanket of silence with it. Plus, the yurt was so well-insulated that we discovered clothing was optional.

Although the yurt booked up within days of launching on Airbnb, Sport Chek has now extended the bookings until January 31, 2019 to meet demand. Keep an eye on the listing for more openings.

From coast-to-coast, easy to intense, we've rounded up the best spots to take a hike this season. Mike Young, hiking expert with Merrell footwear, shares the best routes to take, which are guaranteed to take you places.

Canada's first parka-insulated yurt has arrived and it's crazy romantic