Son of a Trickster by Eden Robinson

I knew I was going to like Eden Robinson's latest novel, Son of a Trickster, as soon as I opened the book to the epigraph. The page features a quote from author Thomas King about the indigenous trickster character, Coyote—a reoccurring presence in indigenous storytelling that often differs from story to story. I love Coyote. He wreaks havoc and exposes truths and his presence often indicates that what follows will at least, in part, be funny. But back to Son of a Trickster.

The story is about Jared, who lives with his party-loving mother, her boyfriend and his dog Baby. Jared is a good kid and helps out when he can, aiding his aging neighbours and doing chores. But he also drinks a little too much for a teenager and could use a little focus. Plus he can't shake the words of his maternal grandmother, who has disliked and distrusted him from birth. She calls him the son of a Trickster, threatening him when his parents leave the room and always eyeing him suspiciously. His mom tells him to pay her no mind—just an old lady with an axe to grind. But then things start happening to Jared he can't explain. Ravens start talking to him, and he begins to see things—even when he's sober.

From the first page, you're invested in this story. It could have been the string of impressive swears from Jared's mom that hooked me (literally on page one), or maybe it was the introduction of Jared's maternal figures, his mother and two grandmothers, all impressive, interesting women (though for different reasons). But at its core, this is a novel about Jared, a teenager trying to navigate a tricky home life, a fractured family, a new relationship—plus school and friendships too. It's familiar if you remember what it was like to be a teenager. It gets less and less familiar as Jared starts seeing things and communing with animals.

A: With the quiet moments, with his [Jared's] different relationships, in the way he interacts with people, those I pulled from my own store, but Jared definitely had his own path. 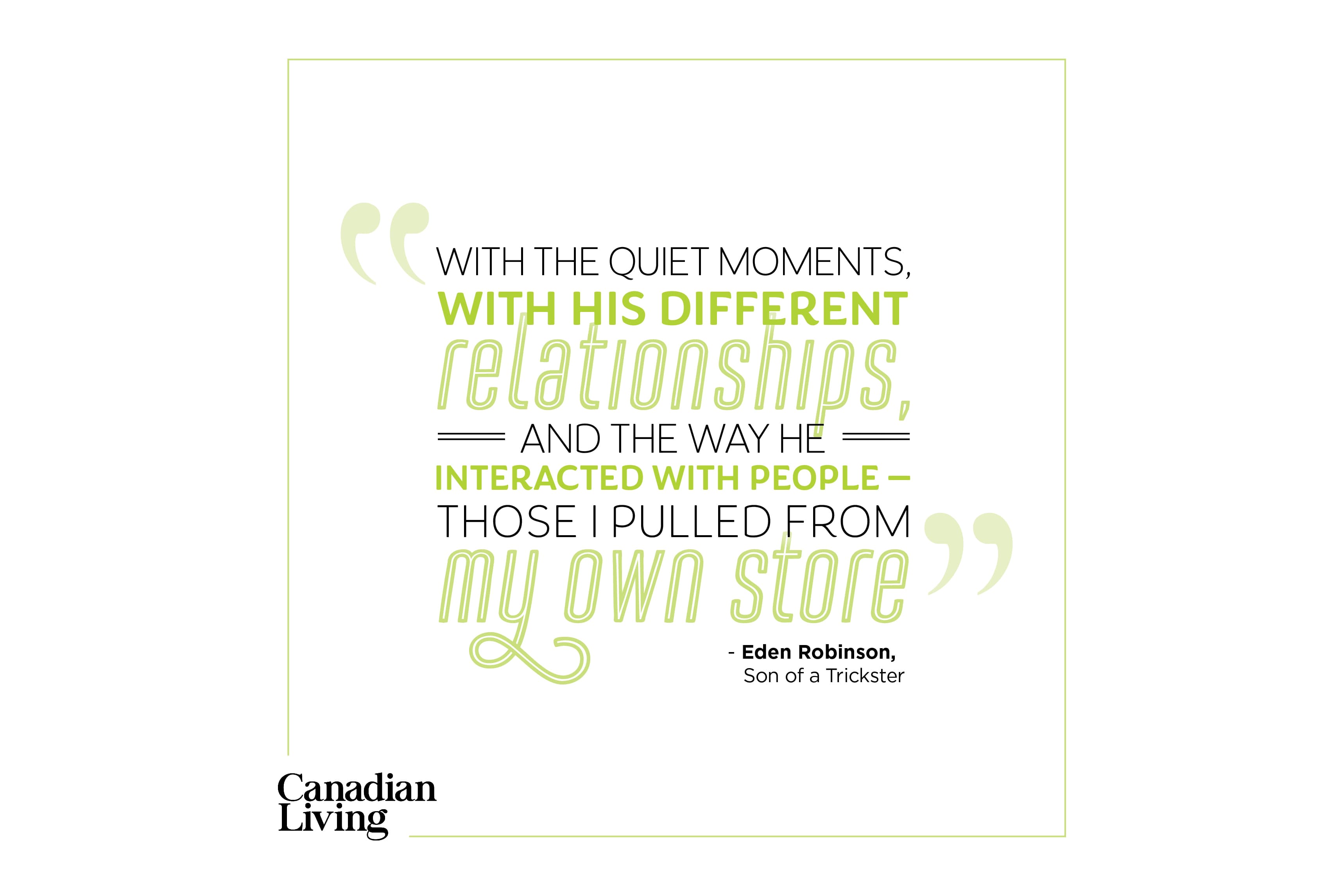 Eden Robinson, author of Son of a Trickster

A: We really aren't afraid to go dark. I know that when I'm publishing in other countries there's an emphasis on just be entertaining. canadian publishing and Canadian readers seem to expect a more... we're willing to go deeper and darker to see what's really happening. I'm so grateful to be a Canadian writer.

Q: Can you talk about the Trickster character?

A:  I grew up with Trickster stories, my Dad told me them. And I love them. I would tell my niece and nephew Trickster stories and they didn't seem to get why they were funny. And I thought that was a little sad because there was a lot of context missing. So I wanted to write a short story with our Trickster. There's a lot of Tricksters in BC and in Indigenous cultures, but my specific Trickster is Weegit the transforming raven. He performs a lot of functions in our culture, but the most important is that he teaches the young people our protocols—by breaking all of them. He's the bad example, and you see the consequences of living through that. He's crazy and funny and I just love that.

Son of a Trickster (Knopf Canada) by Eden Robinson, $21, amazon.ca.

Read more about the 2017 Giller prize nominees below.